A new morning for Seven’s ‘Sunrise’ 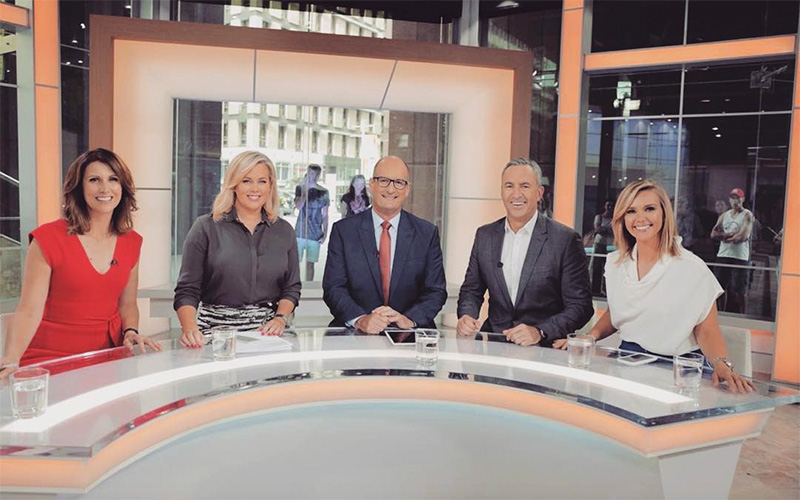 Seven Network’s “Sunrise” debuted a large update this week, just in time for sweeps. The show’s logo, motion graphics and set all saw changes, along with a talent addition.

The show’s previous set, which debuted in 2010, won a NewscastStudio Set of the Year award for its design and set a high bar for a morning show race with rival “Today.”

Throughout the design, Jack Morton PDG worked to create a series of windows that could serve as a portal to bring the crowd into the space.

“‘Sunrise’ wanted more relationship with the outside of the studio,” said Fenhagen. “They wanted to open up some of the windows and get more crowd reactions, but knowing it was dark out during part of the show, they wanted the flexibility to have windows and not have windows.”

This design motif reoccurs throughout the set design as a series of frames that serve as a representation of the windows. The set is used by three main programs each day, which all have unique looks through the use of LED color-changing panels and graphics. Most of the furniture on the set is also wild, allowing it to move as needed.

The set’s main anchor desk has two positions, one with the outside and one with a large video display. Similarly, the multipurpose performance area has a sliding wall that can move to show or hide the windows. Fenhagen worked to develop a contemporary design for the program, which is seen right away through the unique anchor desk.

“The idea of the desk shape is a very angular, sculptural desk,” said Fenhagen. “It’s almost like a modern sculpture.”

The shape also worked to create more relationship between the anchors on camera with its gentle curve. Located in a former retail location, “Sunrise” did make one unique discovery during the process that appears on camera: the flooring. During the preparations, the original marble flooring was uncovered, which was polished and cleaned for use on air.

Along with “Sunrise,” the space is used for Seven News Sydney’s daily newscasts. Directly across from the morning show area, the newscast area sets a different tone through the use of lighting and monitors. Two video panels are located on either side of the main background, creating a panoramic display behind the L-shaped anchor desk.

Overhead, a series of repeating beams create a portal into the video wall, flanked by plexiglass paneling on each side and white backlit panels. During newscasts, the main presenter is joined on set by weather and sports talent, who sit or stand next to the desk. Set during “The Morning Show,” which follows “Sunrise”

During “The Morning Show,” which airs after “Sunrise,” the sets transform through graphics that cover the window and different colors in the wall panels. The set features plenty of flexibility, which is already seen through its use for multiple productions, and is a worthy replacement of a previous Set of the Year winner.