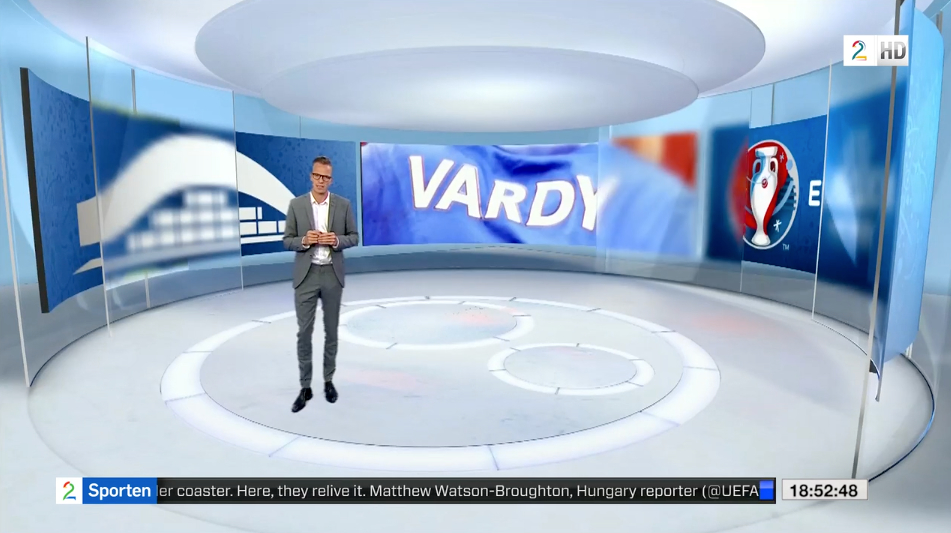 Using only a small studio, Norway’s TV 2 was able to create a flexible production space for this years UEFA Euro 2016 coverage, thanks to virtual technology.

TV 2 worked with Dot Connector to design a virtual set that would work for multiple shows across the networks football schedule and integrate with Vizrt’s various production tools.

“We began this project by asking ourselves, how can we create a beautiful set with a lot of functionality in this small physical space?” said Kenneth Tsai, Dot Connector ceo. “Our company had done similar things before, but TV 2’s existing studio was a real challenge we were ready to face.”

For the project, Vizrt’s Viz Virtual Studio software was controlled by a Viz Mosart automation system. Viz Pilot was also used, through TV 2’s newsroom, to create template-based graphics for the shows. “The new sports set has very dynamic functionalities and great templated capabilities to fit into our Viz Mosart workflow,” said TV 2’s Eivind Netland, head of design for news and sports. “They made the virtual set not just a virtual set, but an instrument that our producer could use to perform the show.”

The set includes 23 different graphic looks, plus two glass windows on set that can transition to six different locations within the space.