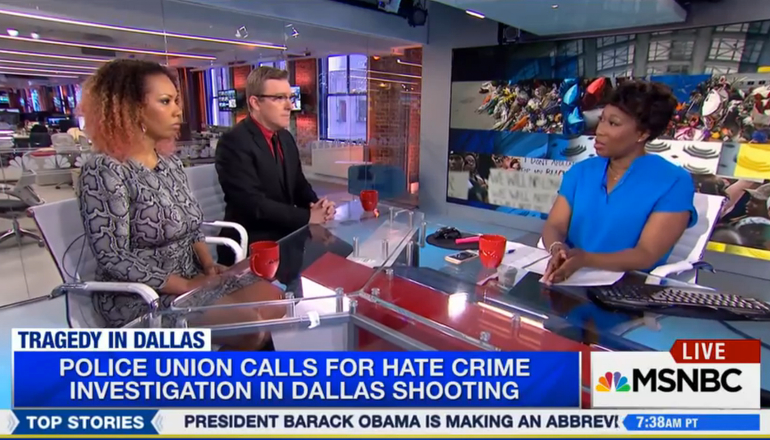 NBC News took the wraps off its new fourth floor newsroom studio last week, though the newsroom space itself has been popping up on both NBC and MSNBC for some time now. The glassed-in studio overlooks the NBC News newsroom, that the network built on the fourth floor of its Rockefeller Center headquarters, and uses the network’s “satellite center” as its primary background.

Separating the working area from broadcast space is a wall of glass that features a row of frosted NBC peacocks, similar to the faux frosted glass panels projected on the walls of the “NBC Nightly News” set. Both NBC and MSNBC have already been using the renovated space for various segments, as well as playing home to Dateline NBC’s “On Assignment” franchise since May, but the studio space itself just went online.

Clickspring Design created both the newsroom and studio area for NBC, with AV integration from AV Design Services, lighting by The Lighting Design Group and fabrication by blackwalnut.

Inside the studio, the angular red and white anchor desk that’s made appearances on MSNBC is used. The desk can be configured multiple ways and is rotated for different looks on-air. The studio also includes two LED video walls, with one featuring movable (tracking) panels that can be configured in a variety of layouts for segments, standups and debriefs.

Unlike the neighboring newsroom area, the studio proper has a more modern, clean look that’s in line with the design of Studio 3A downstairs.

The studio combines the modern aesthetics of glass, sleek surfaces and video panels with exposed brick and beams. Bringing these two styles together, in some ways, harkens back to the early days of MSNBC when it used a massive working newsroom set in New Jersey that echoed many of the high tech yet warm and trendy design elements seen in the new newsroom.

Speaking of MSNBC’s old headquarters, MSNBC is celebrating its 20th anniversarty this week and NewscastStudio will have exclusive coverage and a look back the network’s previous looks later this week.