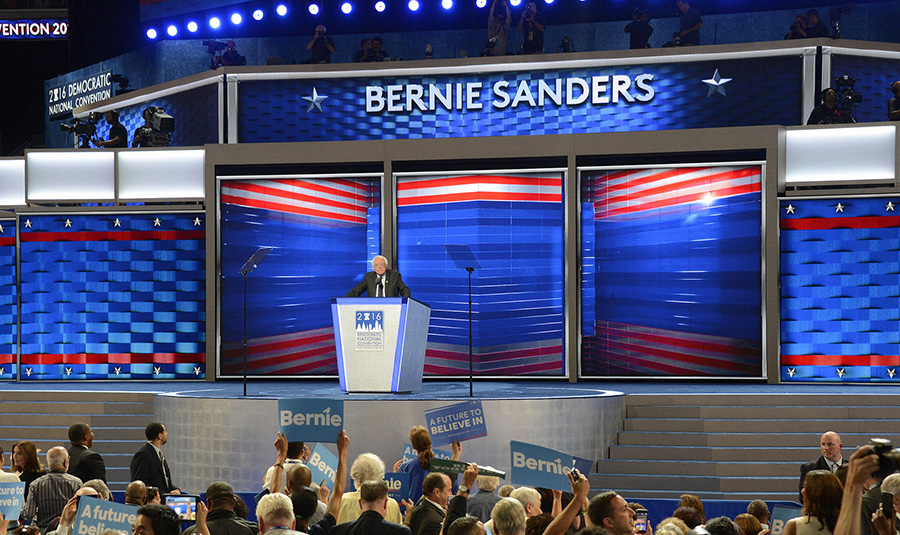 The stage design includes the requisite large screen running across the top — with two narrower panels on either side angled backward slightly.

This “triptych” design theme shows up elsewhere in the design and is an obvious example of how sections or groups of three tend to look more balanced visually (or, for the comics out there, everything is said to be three times funnier when done in sets of three).

Take, for example, below the main screen array, an additional angled set of three panels creates a header that’s also separated visually from the rest of the set.

The main background is, of course, more video panels — with a twist. Instead of simply remaining stationery or sliding back and form, each of the three sections (there’s that three again) is actually a motorized, three-sided unit that can be rotated.

Off to each side of this area, meanwhile, are two square-ish panels followed by a series of narrower sections all topped with lighted transoms (note that there are three of these narrower panels on each side as well).

From the initial looks posted online so far, it appears the “default” graphics setup is a flatter design that emphasizes the Philadelphia skyline, though more 3D animated elements also make appearances, as well as a weave-like textural pattern that combined with a collage of similarly styled stars.

Let’s just hope that, will all these video panels, the Democratic can avoid a technical meltdown like the one we saw at the RNC.

There’s also a 360 view of the DNC stage available: