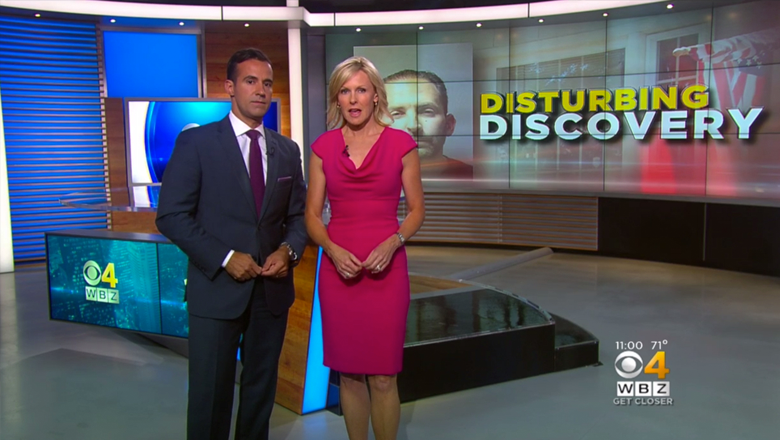 WBZ-TV, the Boston O&O, unveiled a refreshed set Monday, a look that eschews cooler grays in favor of warmer woods and blues. Clickspring Design worked with WBZ-TV on the project with Mystic Scenic Studios providing fabrication. The set, which first debuted in 2011 in conjunction with a new logo, was updated just a little under a year later with a new video wall.

The basic layout of the anchor area remains the same. The station maintained several of the old structural elements as well, including the video wall and internally lit header banding. The finishes, however, have moved away from the cooler, more modern grays and metallics in favor of rich woods and bright backlit blues.

Also added are elements that include horizontal slats against backlit panels.

The fresh also extended to the station’s various standup and weather venues. However, the anchor desk, previously only a larger, internally lit and printed graphic affair, has been swapped out for a more compact version that combines wood tones an two “floating” video panels placed off axis from the front of the desk. The set’s main background of the video wall, used as both a cityscape and storytelling tool, has many similarities to cross-town rival WCVB-TV, which also uses a mix of woods and a plethora of video panels. WBZ-TV’s set, however, does manage to separate itself from WCVB-TV’s but making use of a mix of single-panel screens mixed in with more visible hard scenic elements.