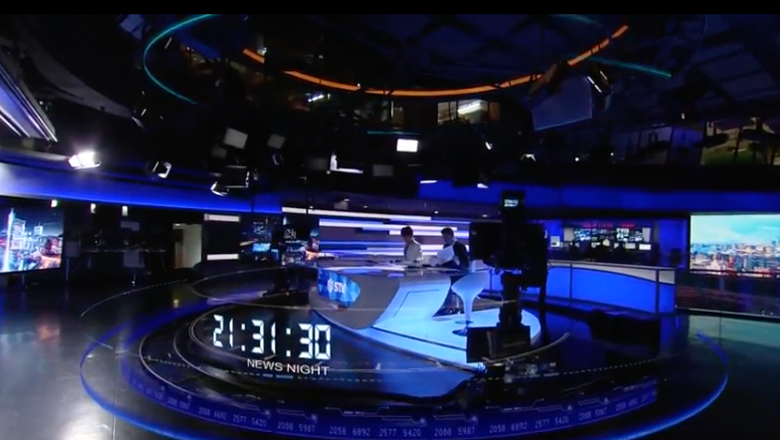 Shanghai Media Group’s STV has debuted a new set from Broadcast Design International that combines clean, modern lines with augmented reality to create a high-tech look that blends into a nontraditional studio space.

At the center of the large studio area, which is connected to an adjacent atrium, sits a reversible anchor desk that includes a strong white element that curves up and “hooks” back under the glass top, framing one side of a rectangular LED panel. The two-sided design of the desk means the layout is flipped when viewed from the opposite side.

The desk itself is placed in front of railing that separates the studio area from the open atrium. Sister network Dragon TV is located on the floor below, with two floors of office space above.

Across from this open space is a working control room, LED video wall and wide, curved backlit wall with glass panels, all of which are included in one of the set’s primary background views.

The control room, which was created as part of the project, sits to the left of the LED panel used primarily to project cityscape images. A curved video wall to the far right was strategically placed to wrap around the existing glass elevator that services the building, explains George Edelmann, senior design representative at BDI. “This is a very interesting project that was very technical and complex,” said Edelmann, pointing out that the design required working around mechanical and structural elements such as low and varying ceiling heights in the building as well as what was quite literally, a hole in the middle of the floor.

On the opposite side of both sides of this expanse are two solid walls accented with internally lit, color-changing bars stacked in an abstract pattern. The left wall includes a suspended video panel, while the other side of the space features a 2×2 array for standups and an additional, integrated panel.

Not only are these screen designed to be used as OTS elements, but they can also be used for toss shots and live interviews. The monitor arrays and LED columns are all trackable via overhead systems, allowing a variety of layouts for different programs. The anchor desk itself can also be shot off-axis, creating an alternate two shot or interview setup.

The studio space doesn’t end there — instead, it wraps around to a full 360 degrees. The flip side of the space features a wall of faux windows created with LED panels and framed with color changing pillars and headers. This area is designed to be used for STV’s morning programming and alternate uses such as interview or less formal setups. A third, final venue combines dramatically intersecting walls outfitted with floor-to-ceiling video panels and a video ribbon along with a sweeping header.

In addition to the impressive scenic elements, STV also augments the hard scenery with digital additions through the use of augmented reality technology — including rotating rings and a digital clock-style countdown clock that floats around the anchor desk. Other virtual elements include covering the control room view with graphics.

Video of Design and AR