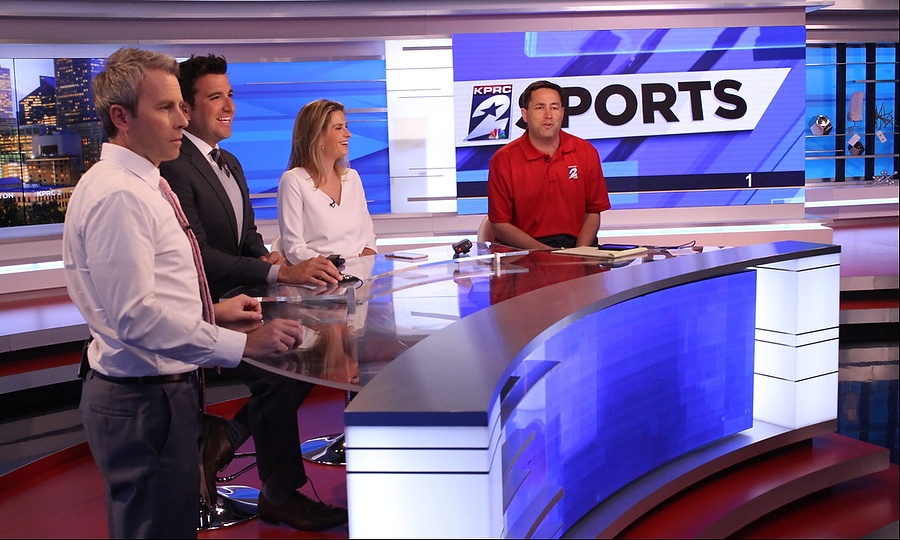 With the opportunity to, quite literally, build a new station from the ground up, KPRC in Houston knew it was important to create a dynamic inventive environment for its newscasts that reflected a city — and station — on the move.

The station, which moved into its brand new broadcast facility built behind its old building earlier this month, set aside nearly 3,500 square feet for its news production space.

“And I used just about every inch of that space, as I’m prone to do,” said Michael Wright, principal of WrightSet, with a laugh.

Wright’s design strategy focused on creating three distinct areas — a weather center, home base and “news cube” that serve as the foundation for dynamic angles and cross shooting.

Wright, who first used the “news cube” approach at KPRC’s sister station KSAT, strategically placed KPRC’s cube, which is created from two LED video walls joining at a 90-degree angle with a hairline corner, where it could be used for a variety of both traditional and cross shots. “They thought hard about the project and invested intelligently. They were super creative and not afraid of doing something a little bit different,” said Wright in discussing working with the team at KPRC.

Wright worked closely with KPRC Vice President and Creative Director Mike Guerrieri to create the set, who was with him at the NAB Show when the idea for the “news cube” was sparked by a display the two saw.

From a scenic standpoint, the video wall was strategically positioned to complement the layered look of the backlit panels on either side of it.

The use of these side panels was just as important to Wright as the high tech video array and were key in creating anchor one-shots that pop on screen.

The anchor desk, meanwhile, can be moved, including in front of the neighboring weather center for severe weather coverage.

The weather center, which is capped with a large “halo” that echoes the curve of the anchor video wall, was kept large and open to allow for the use of augmented reality in the future, while an additional video ribbon along its rear curved wall allows it to instantly rebranded as, say, an election center.

Throughout the set, a combination of horizontal lines and sharp angles inspired by the station’s logo are interwoven into printed backgrounds, internally lit structures and architectural accents.

The anchor desk, for example, features internally lit columns on either end and is fronted with a curved video panel and glass section with integrated horizontal accents. The horizontal accents particularly stand out in the set’s interview area, which, despite being open and airy, also manages to convey the sense of a more intimate room.

The set also boasts a movable wall that can swing outward from the studio wall to create an additional three-person standing pod venue or, when closed, a more traditional standup area.

When creating this area, Wright positioned it so both setups provide interaction shots with the anchor desk and other areas of the studio.

The studio was fabricated by 2020 Exhibits.