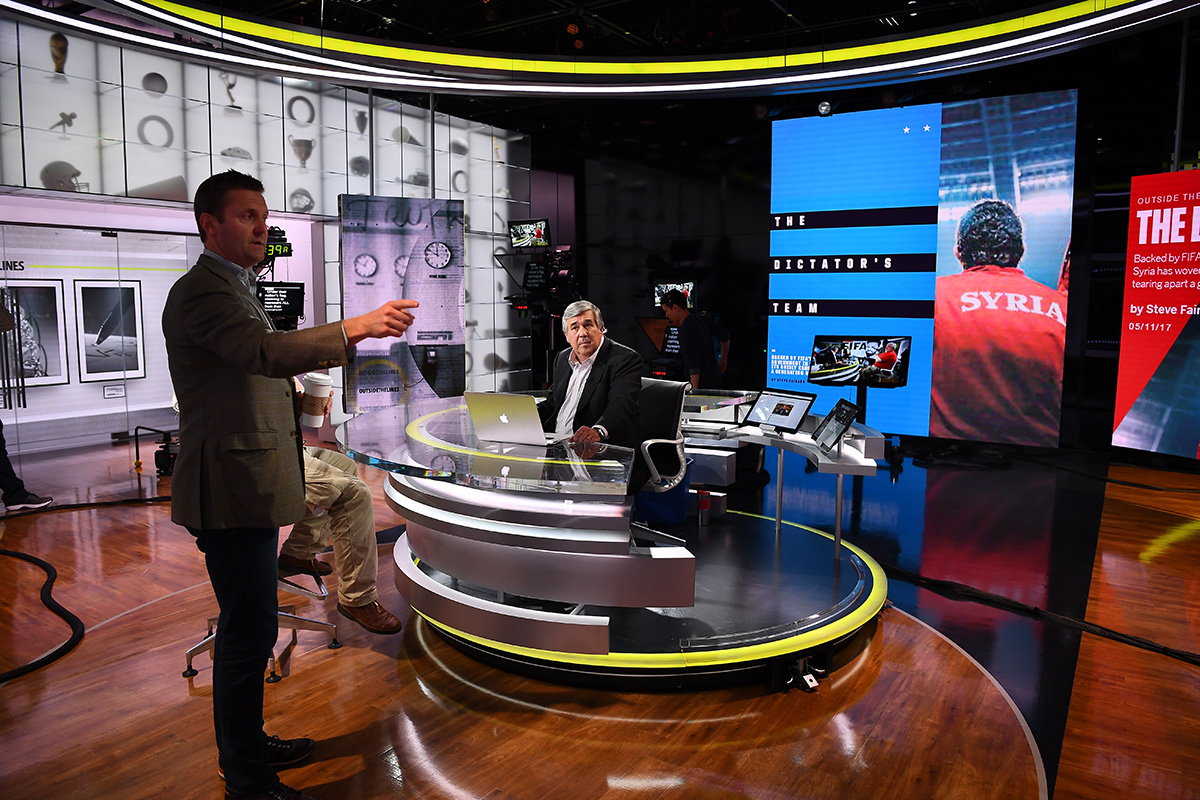 When designing Studio Z for ESPN, Clickspring’s Emmett Aiello focused on creating a scenic environment that put great journalism and storytelling at the forefront.

“We didn’t approach the design with any other sets in mind, either for the sake of standing apart or living safely within the existing vocabulary,” said Aiello. “Naturally we wanted to design something eye-catching and beautiful, but we tried to not upstage the story or talent in any way.”

The studio is used for both “Outside the Lines” with Bob Ley and “E:60,” the network’s sports focused newsmagazine.

During the early stages of the design process, Clickspring Design was tasked with paying homage to “OTL” in the Studio Z design, as the studio would become the show’s permanent home. For Ley and company, it would mark the first studio designed for “OTL” from the ground up, also incorporating the new graphic language of “E:60.”

The studio space itself is fairly tight, especially when compared to the larger studios at ESPN, so the design team was very cognizant of depth. To achieve this goal, visual layering using clear and opaque acrylics with applied texture treatments are incorporated into the design, along with lots of reflection, explained Aiello.

Along with these textures, LED video walls are prominently utilized in the space. “We wanted to place the new graphic identities up front and in the spotlight. These layouts, ripe with texture and typography, were so beautiful and had so much depth, that they needed no adornment. So we floated them, full bleed, in a heavily reflective, mostly dark space,” said Aiello. The space draws heavily on the circle for inspiration, which was derived from the “OTL” logo’s prominent “O,” in terms of both layout and the literal use of the shape in both the anchor desk and circular LED panel.

A big chunk of the budget, not surprisingly, went toward the high resolution LED walls and tracking system, which served up unique design and engineering challenges due to the weight of the panels.

However, this allowed Clickspring to continue its design strategy of letting the graphics take center stage, explained Aiello, referencing the art technique of chiaroscuro that uses contrasted light and shadow created by splashes of light.

The design team kept the materials and color palette monochromic, though flexibility was added through lightboxes and studio lighting.

The studio, which is designed to be shot in 360-degrees, also features a wall and arch of archetypal sports imagery, giving the suggestion of space beyond. By combining LED and glass doors, the set has the feel of a neighboring gallery-type space, which not only makes the space feel larger than it is but is also a subtle nod to history and curation, both of which play into the emphasis on storytelling “OTL” and “E:60” bring to broadcasting.

“It’s tricky selling reflection as a principal element of design for broadcast because of the potential to reveal cameras and reversed imagery. You need a client that is willing to take the leap and nuance how they shoot and light the set,” Aiello pointed out.

The result is a space that also has a highly reflective and amorphous feel.

“This was a tremendously collaborative effort between our client, Mystic Scenic Studios, AV Design Services and the ESPN directing, lighting and camera teams. When you have that collaboration, you can push beyond the acceptable safe areas of broadcast design,” said Aiello.