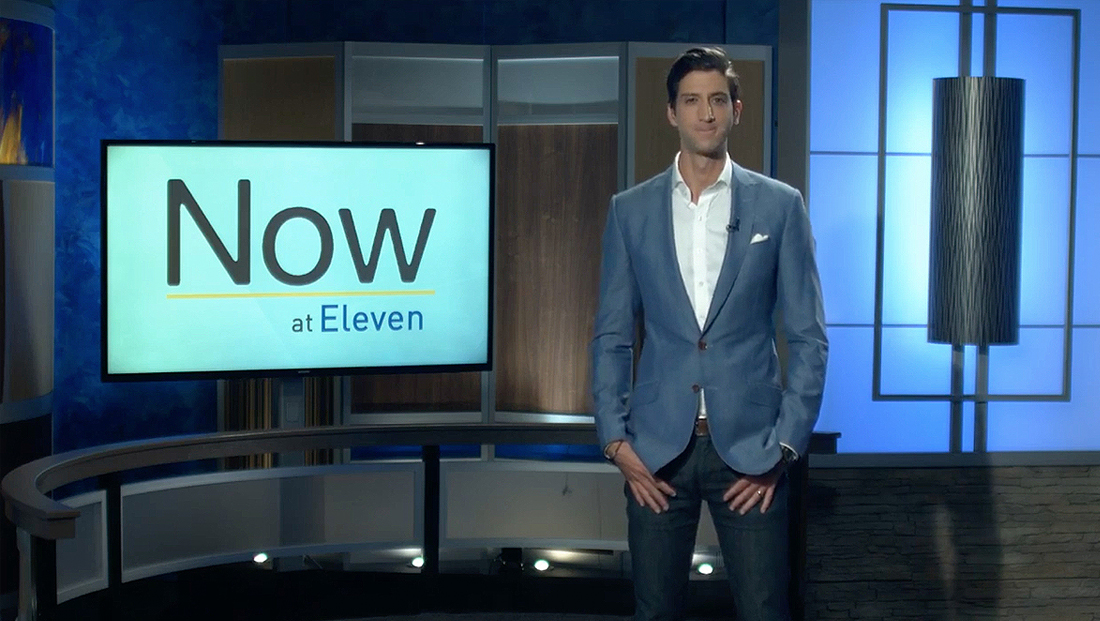 WVEC in Hampton Roads, Virginia, has launched its entry into the alternative news format — a late news program called “Now at Eleven.”

The newscast, presumably targeted at a millennial demographic, uses various parts of the station’s existing set along with its own graphics package and logo.

Anchor segments in this broadcast, not unlike those in the station’s other newscasts, tend to be heavily geared toward standups with a video panel or wall behind the talent.

The name itself is a subtle nod to the station’s “13 News Now” branding, which it uses both on air and online. The logotype renders to word “Now” in a sans serif typeface with rounded accents, giving it a lighter, more contemporary feel.

The “at eleven” part of the logotype, meanwhile, set in a slightly different sans serif, with a yellow line separating the two parts. The station’s main logo and branding appear in a single color below.

The background of the open and title card uses a steely blue background drawn from the station’s main graphics package, but with city imagery incorporated and dominated by a diagonal line accent in addition to thinner lines and a subtle grid pattern. The show’s graphics are significantly simplified from the station’s main news graphics package and are distinguished by a thick yellow line at the bottom of the screen and share similar typography. The graphics themselves become smaller, simpler blue boxes with a thick yellow line on the left side and the show’s logotype shown partially transparent in the lower left as a bug.

It’s worth noting the lower third and other insert graphics on “Now at 11” drop the traditional Tenga colored coded “rundown” format used at most of the company’s stations during most newscasts.

Similar formats and looks have already rolled out at Tegna’s KUSA and WTSP.