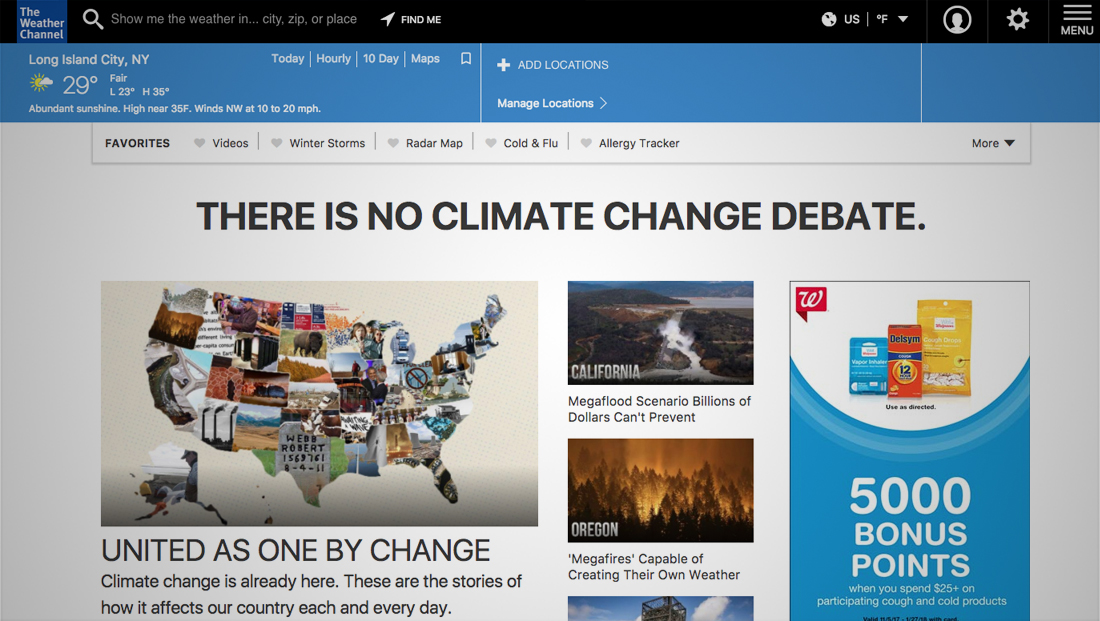 For 24 hours, The Weather Channel’s website weather.com is dedicating its homepage to climate change and highlighting stories from local communities across the United States who are feeling the impacts of climate change.

The stories are part of its digital series “United States of Climate Change,” which features 50 long-form articles, investigative pieces, videos, photos essays, and even a digital graphic novel, to communicate the reality of climate change across the country.

“In terms of significance right now, I’ll answer in two senses. It’s urgent in the time we live in because people across the U.S. are quietly living the impacts of climate change and the general public is searching for credible information on what is (but shouldn’t be) a contentious subject,” said Greg Gilderman, editor-in-chief, weather.com, in an email interview.

“We asked our meteorologists to let us know when there’d be a day when there wasn’t a winter storm or one likely in the next few days, and today was our window to highlight this important issue,” said Gilderman.

“The idea behind the “United States of Climate Change” project was straightforward: tell one climate change-related story for each state, many of them investigative,” explained executive editor Kevin Hayes in a statement.

Those investigations and, ultimately, the project as a whole, came to much the same conclusion: America is unwilling to invest in mitigating the effects of climate change to the degree that future safety and stability requires, according to Hayes.

“The impacts of climate change are being felt in different ways across the country. In some places the coastline, itself, is shifting. Others are feeling it more through changes to the local economy or disruptions in weather patterns,” said Hayes. “It’s impossible to pick a story that would tell, definitively, how climate change will impact the entirety of a given state. So we tried to tell stories that give the shape of the impacts Americans will be feeling as the climate continues to change with a diverse lineup of pieces.”

This isn’t the first time The Weather Channel has used its homepage to send a message. It’s previously devoted its entire homepage to Donald Trump’s stance on climate change, as well as the Puerto Rico crisis.