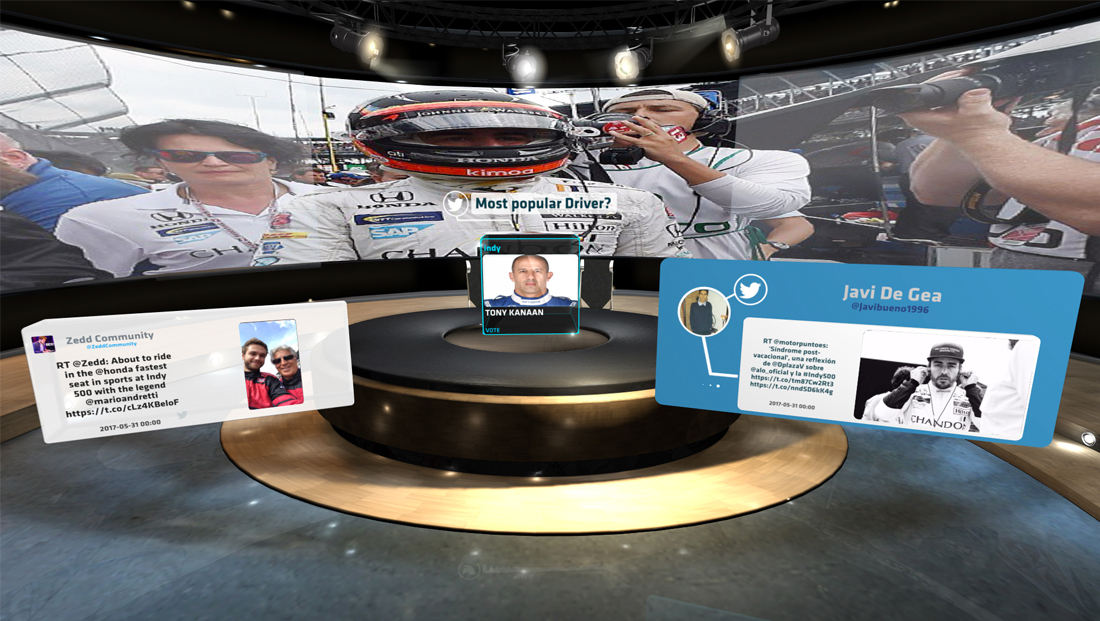 OnMedia is an end-to-end solution for managing virtual and augmented reality 3D graphics based on social media feeds.

OnMedia is one of the developments resulting from Brainstorm and never.no’s partnership as leaders of Project VisualMedia in the Europe 2020 Horizon framework program.

The project is funded by the European Commission, as a response to the needs of creative industries in the broadcast media sector.

OnMedia integrates both companies’ technologies, delivering all the power of its 3D graphics engine to display the information gathered and structured previously from the internet.

The Social Media Engine can select the information, edit the graphics template, publish it and send the graphics to any broadcaster’s workflow, or play them out to air directly, presenting such data in the most attractive manner, and enhancing the information displayed.

OnMedia is also scalable, so it can be adapted to the needs of local and regional TV stations, national broadcasters and production houses.

It is an integrated, standalone, modular application which makes it easy to search, filter, publish, visualize and engage with content from the audience.

“OnMedia helps broadcasters to enhance their programming content to drive higher audience ratings and foster loyalty from their audiences, providing a unique, end-to-end solution for social graphics management that takes advantage of our more than 20 years of experience in delivering high-end real-time graphics,” said David Alexander, commercial director of Brainstorm in a statement.

Scott Davies, CEO of never.no commented, “This goes far beyond the desirable requirement of live social data in visually dynamic TV formats, but also fundamentally provides a missing production flow in traditional broadcast environments. Whilst visualisation is key, the ability for producers, journalists and editorial teams to collect, moderate and build visual formats in real-time where simple creative changes can be made in a single interface quickly and easily is something that is missing in the industry. Now with the OnMedia solution, end-to-end social content management, customisation, and publishing to both 3D TV graphics as well as second screen environments can be achieved quickly and simply.”

See OnMedia at NAB 2018 for an interactive demo of how to manage live social content, control and preview scenes, publish to 3D and virtual studio graphics, control gesturing as well as sync with 2nd screen applications. Visit the Brainstorm stand SL4616.