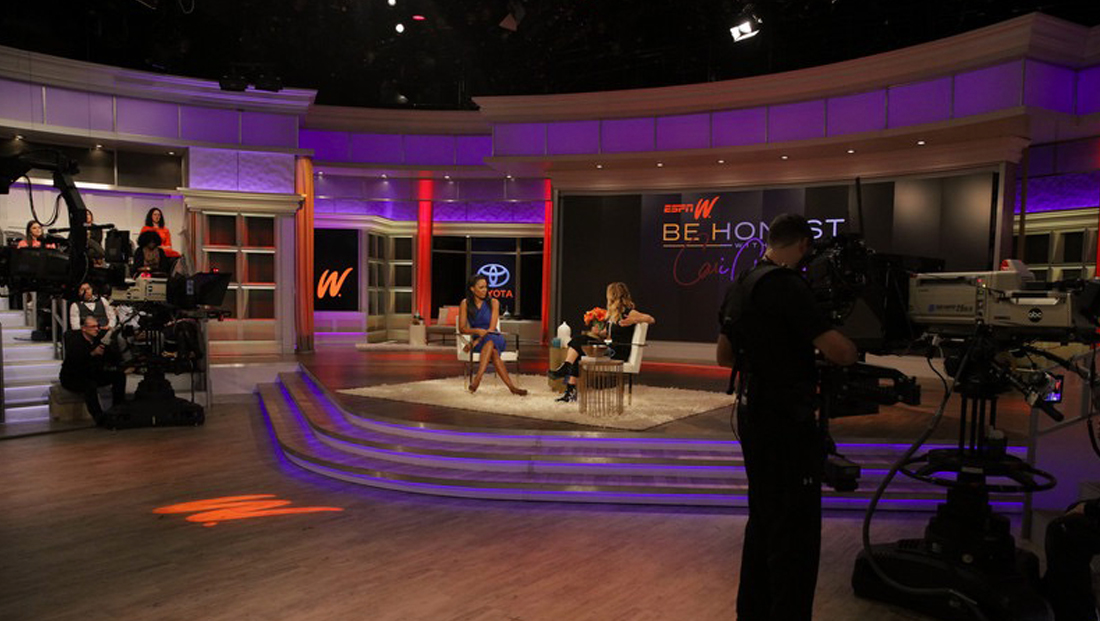 ESPN’s female focused franchise, espnW, has taken its popular “Be Honest with Cari Champion” podcast to the small screen — and used a studio from a corporate cousin for the first installment.

The multiplatform “salon series,” as ESPN calls it, used the set of ABC’s “The View” to tape in front of a live audience.

ABC is owned by Disney, which also owns ESPN. “The View” studio was transformed from its normal light and airy look into a darker, more sophisticated look thanks to color changing technology.

The set’s headers and risers were shifted to violet, while bright red pillar accents were added while the studio’s faux windows became dark backgrounds sporting the espnW “W” icon and sponsor logo.

The square backlit panels were darkened as well.

The “W” icon also appeared in red on the studio floor thanks to a custom gobo.

Behind home base, the studio’s large video wall was also mostly black, with only the show’s logo displayed in red, gold and violets. “Be Honest” has also been a regular segment on “SportsCenter,” where it originated from the show’s Bristol studio, with the multifaceted video wall used as the primary background with what appear to be the same chairs used on “The View” set, along with an oversized glass topped coffee-table style piece.

“The View” set was first built in 2014, when the show switched studios. It was modified numerous times, with a cohesive update debuting in 2016.