Kelly Clarkson’s studio may be in L.A. — but it keeps the Texas (and country) in the girl

The set includes multiple locations for dramatic entrances — including a banded double door near the band area where comedian and actor Steve Carrell entered to re-enact his cult favorite “Kelly Clarkson!” scream from “The 40-Year-Old Virgin.”

Although the set is built inside Stage 1 at Universal Studios Hollywoods in the Los Angles metro, it draws heavily on elements inspired by Clarkson’s native Texas and country music career. 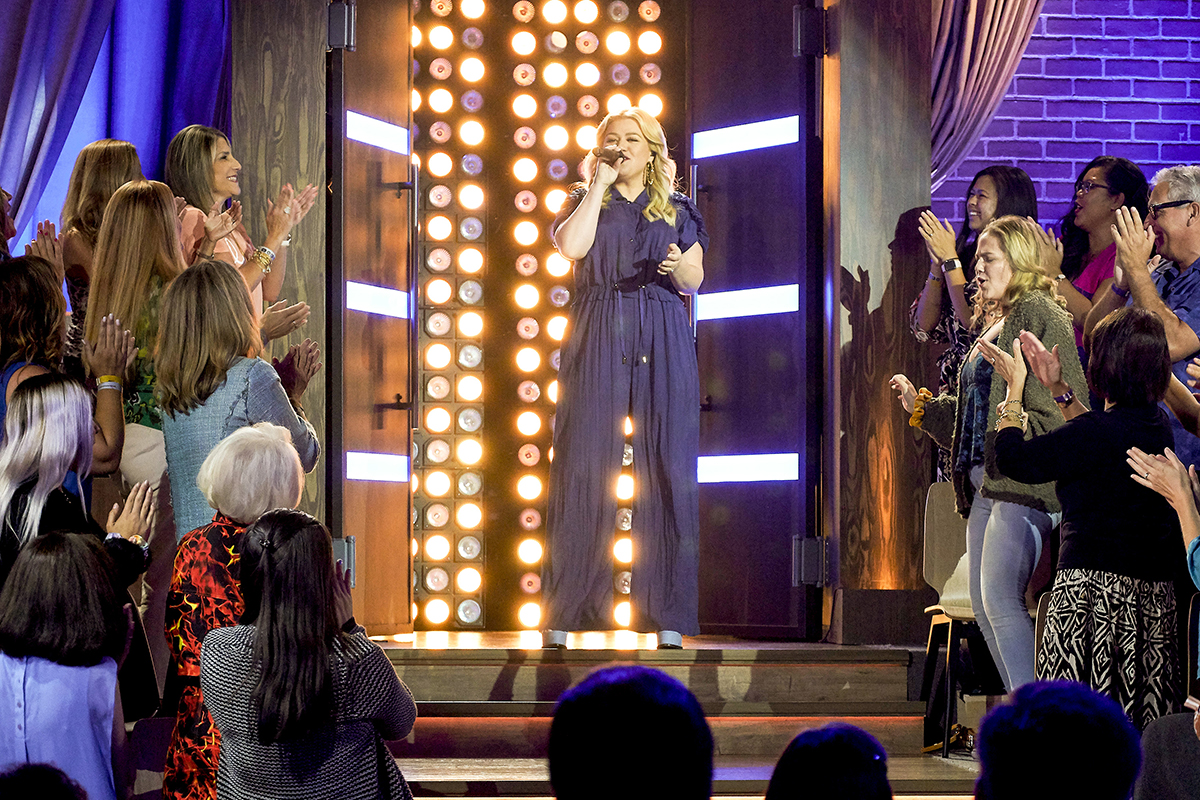 Kelly Clarkson started her show with a cover of ‘9 to 5’ that combined a pre-taped segment with her entrance into the studio. This photo, along with others in this article, is taken from a future episode of the show provided by NBCUniversal.

Clarkson appears to make it a practice to enter through a similar door positioned at the top of the audience seating area — appearing from in front of a bold wall of lighting that nods to contemporary concert production design.

Much of the audience area is wrapped with wood pillars mixed with brick texture and artfully lit curtains, creating a balanced blend of rustic elegance.

Many of the lines in the studio are set at an angle — including the “rafters,” crossbars on the “barn doors” and the color-changing lines in the floor. 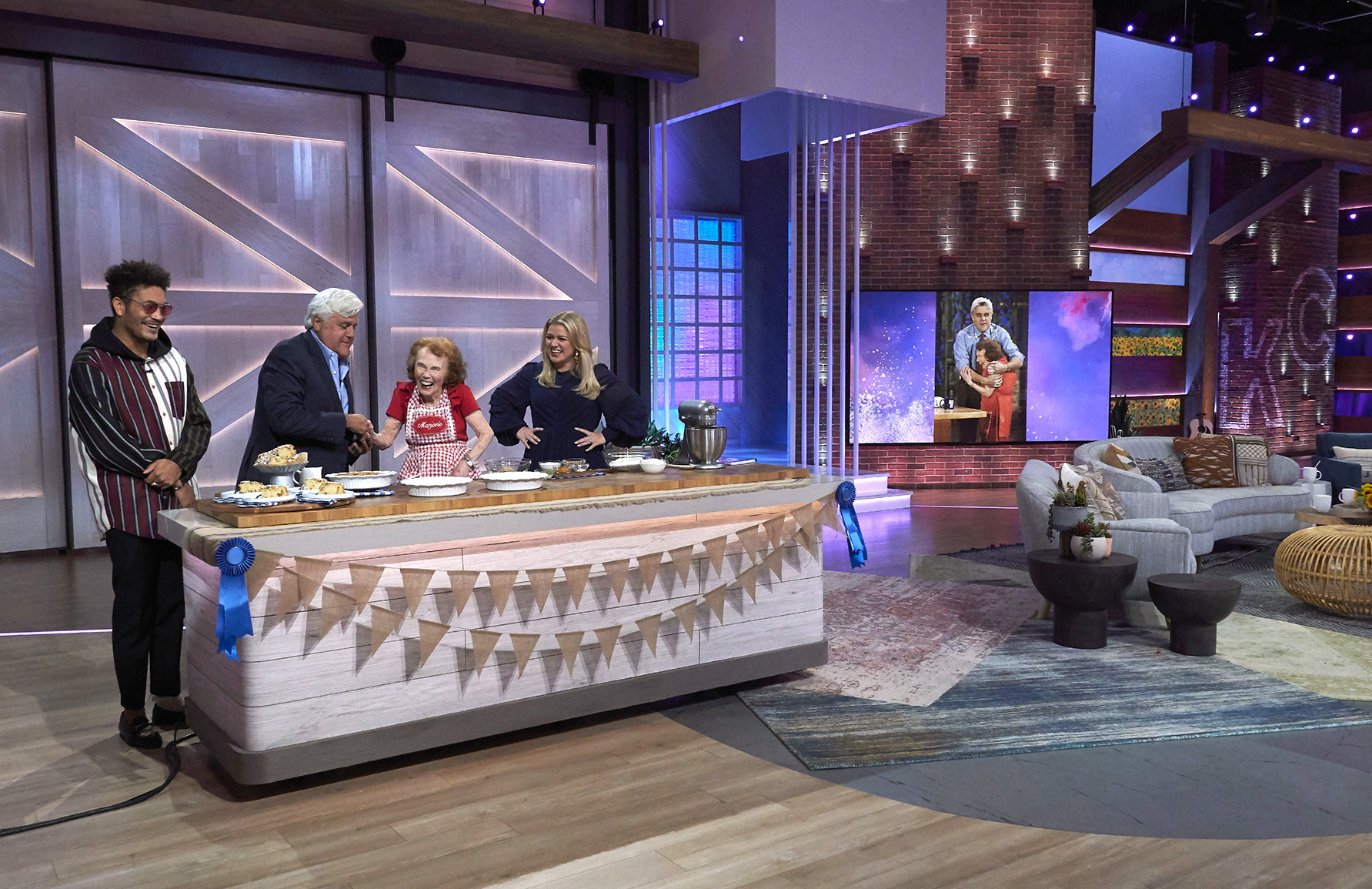 Not only does this motif play homage to barn and farm design, but it also appears to be a nod to the sharp angles in the letter “K” which, along with a “C,” is prominently featured on a faux brick wall off to one side of home base. 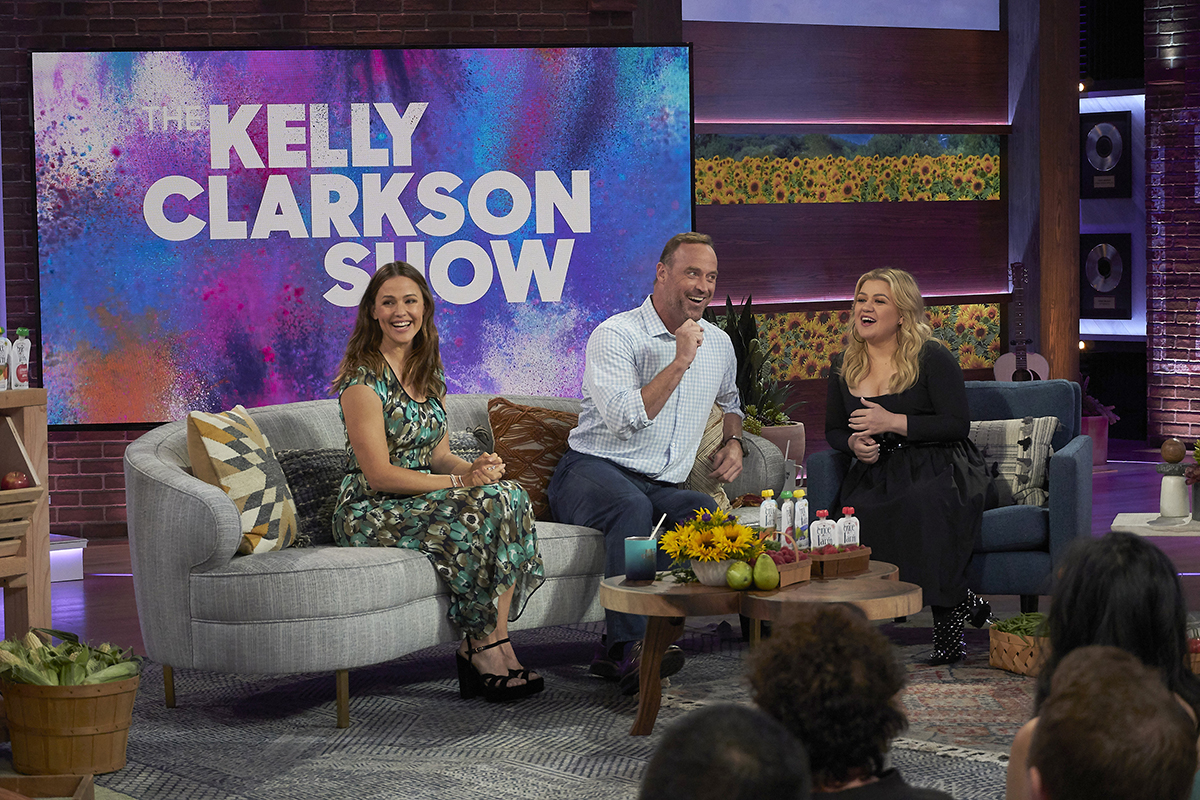 The studio’s main area, which sits in the middle of the studio, is backed with a giant video panel mounted on a faux brick wall with carefully curated furniture in front of it in earthy tones and textures.

The video screen can be used as both a background for interview segments and can appear on screen as a shoot-off element for the multipurpose area next to it. 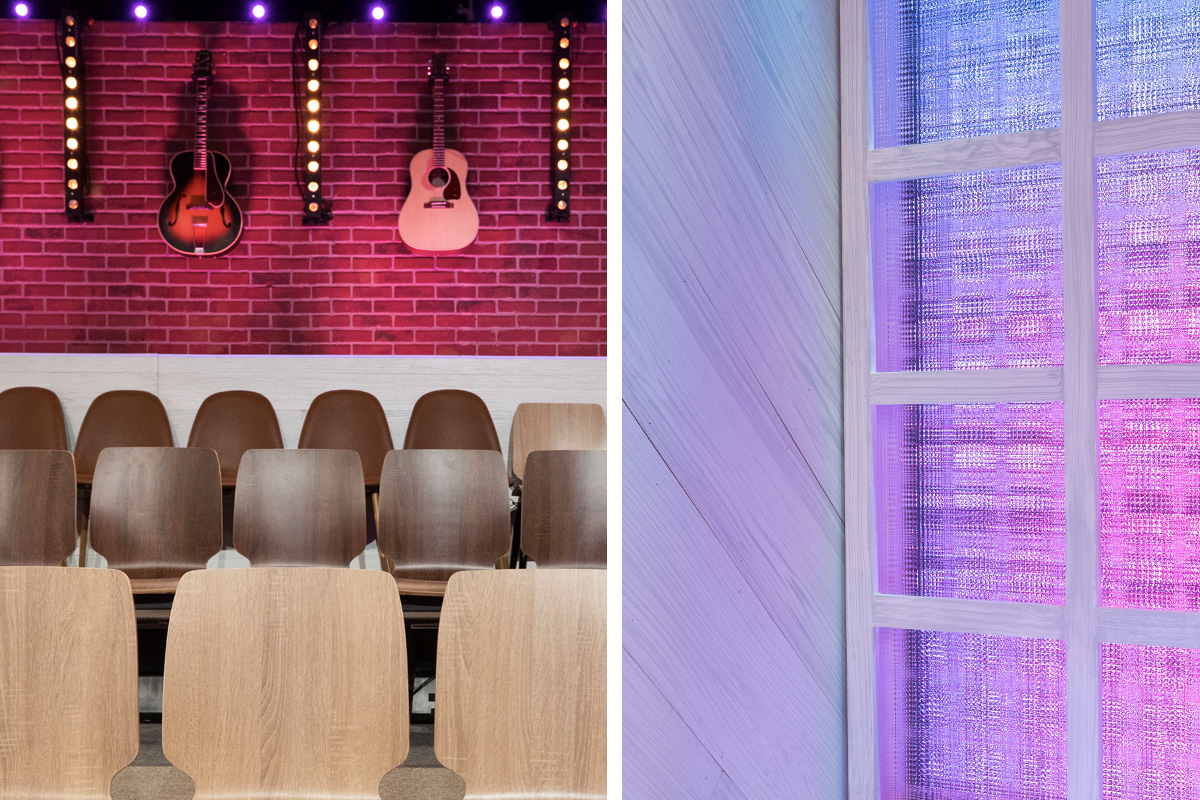 Home base also has its own entryway for guests — in the form a sliding blue and pink grid panel with a short “runway” that also frames the background in many of the home base shots as a bold pop of color.

This area also features a bit a more modern “glam” — including thin vertical partitions and a boxy header element that frames the space. Its standout look appears to be aimed at drawing the eye to guests’ entrances and adding a bit of dramatic flair to them.

Behind Clarkson’s armchair, meanwhile, are colorful bands of backlit sunflower graphics — another touch of country that also brightens up the space with the floral equivalent of a bright smile.

These panels alternate with thick, rich wood surfaces — perhaps inspired by rustic barn or wood slats with light “peaking” through.

In addition to her Texas roots, Clarkson’s country music career that started on “American Idol” is represented by the barn-like space.

Walls of the “barn” are decked out with guitars and music recording certification record plaques, while the set also features multiple runway-style pathways for Clarkson to move around the audience during musical numbers or interaction shots.

The role of lighting

In addition to the carefully crafted farmhouse textures and colors, lighting plays a key role in the show’s set as well with Darren Langer providing the design.

The space includes multiple neon-sign inspired versions of the show’s logo that can not only change color but also give off concert-inspired burst effects.

Miniature globe string lights are carefully suspended above the studio and audience — and often appear in wide jib shots, with the spots of light providing an artful shift in perspective as the camera moves.

Other lighting includes modern interpretations of chandeliers — including ones that pay homage to both mid-century design and more traditional farmhouse fixtures.

In addition, many of the brick surfaces are also dotted with powerful uplights built into a brick that projects slightly from the wall, which creates a sort of modern interpretation of a candlelit sconce.

And, while these lights can be left set to a steady beam of light, they’re also able to turn on and off in tune to music.

The set also features an area for Clarkson’s house band — which also happens to be the one she uses on tour — as well as, on the opposite side of the set, a wall that blends horizontal wood slats with a cityscape view peeking through, record plaques and flat-panel monitors — one of which is designed for remote interviews while the others can display topical graphics.