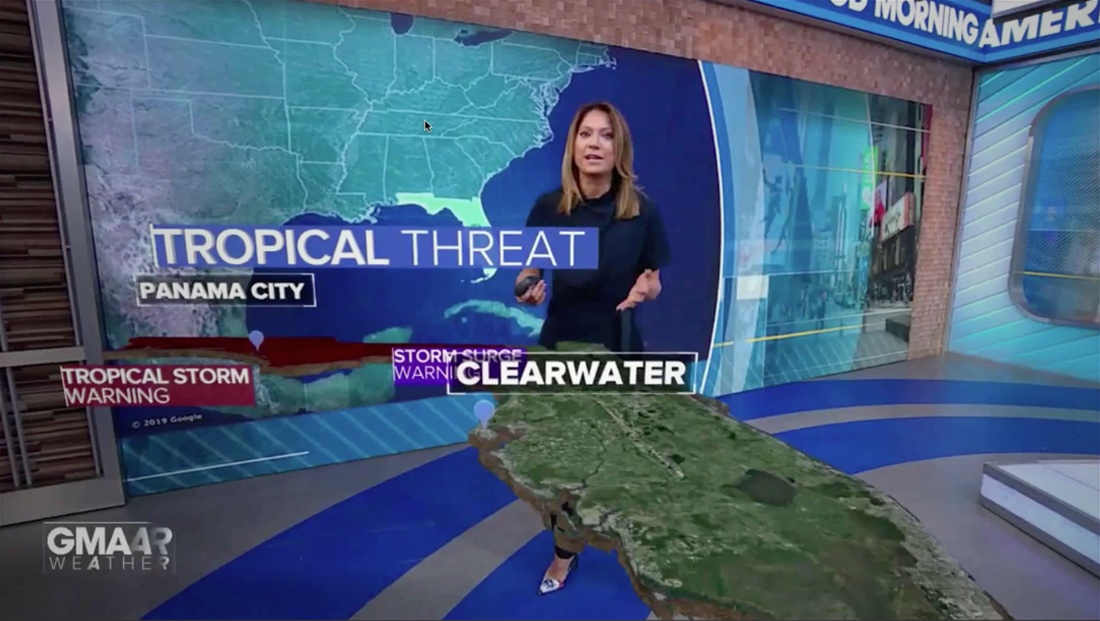 In each segment, the seamless video wall behind Ginger Zee (or, in one case, Rob Marciano) changes to a monotone map with a “target” effect that highlights a specific state where a weather event is taking place.

The segments are branded as “GMAAR Weather.”

The camera then pulls out as a white wireframe quickly fills in with satellite imagery powered by Google Maps.

Different layers, including a headline banner, city labels and other key facts can be added and removed as the weather patterns are explained.

Other layers include animated depictions of wind flow, sinking air, tornados or storms that the forecaster can interact with.

Each segment typically explains multiple weather concepts on the 3D map, which floats in the air at approximately table height and labels and other text floating above that.

All of the segments are captured using a handheld camera, with the operator often moving in close on specific cities or areas as the meteorologist discusses it.

It’s worth noting “GMA” doesn’t use the AR every day — instead saving it for when there’s a significant weather event taking place in the country that can be effectively illustrated with an interactive virtual map rather than an ordinary weather map.

That said, the shape of some states, such as New York and Florida, seemed to work better.

In fact, Zee even “tucked” herself into the Long Island Sound while giving a play by play of the windy patterns facing New York.

Meanwhile, Montana and New Mexico didn’t quite have the same impact, with the 3D model of the state looking more like a generic flat map segment since the state borders here aren’t as distinct.

“GMA” also wisely drops the ticker (at least in select markets), bug and any lower thirds during the segments, ensuring that the full screen is available for the map.