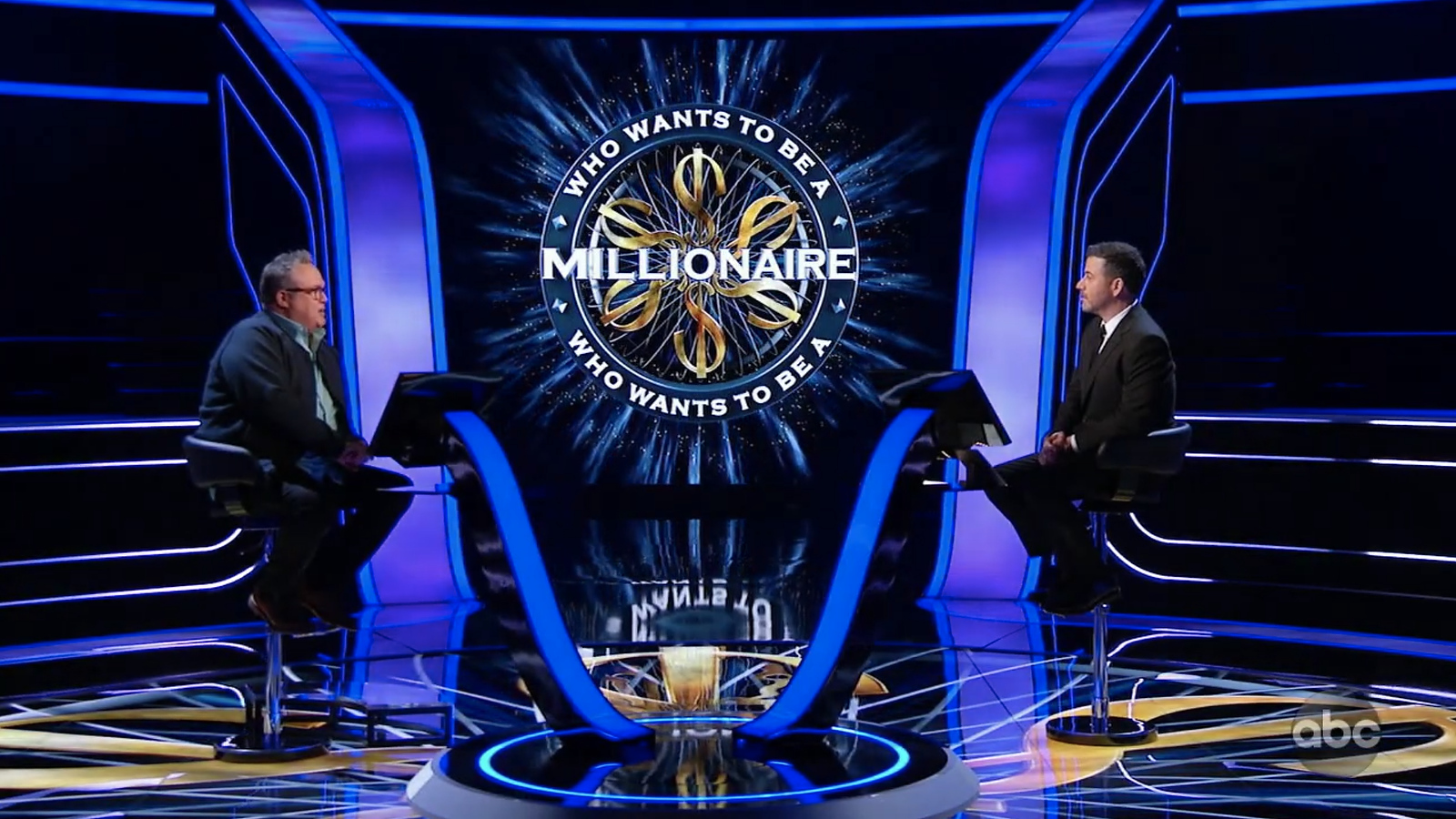 The game show that made the phrase “final answer” popular almost overnight is back — with all the lighting effects, musical cues and its famous circular set.

“Who Wants to Be A Millionaire?” originally aired on ABC starting in 1999 and was one of many British TV imports adapted for American television.

Since then it’s been through many rule changes and host changes, the latest being a Jimmy Kimmel-hosted celebrity version on ABC.

The show retains many elements of the original set, including the in-the-round set, darkened areas and dramatic lighting effects, but key changes have also given it an updated look, designed by Florian Wieder.

Many of the updates, however, appear to be influenced by the current British version of the show, which is still on the air.

When “Millionaire” first came the U.S., the licensing deal required American producers to keep much of the same on-air elements — including the set, lighting, music and even host wardrobe similar.

The original U.K. set design was created by production designer Andy Walmsley and has influenced all the subsequent designs. It took the approach of trying to create an uneasy environment for contestants — with the high stools, chiaroscuro lighting, and the feeling of being, quite literally, the center of attention.

Perhaps the most notable change in the 2020 version, however, is the floor, which has been updated with full LED video panels rather than just glass laid over with metal supports above reflective material. This allows for more dynamic video cues during gameplay as well as when coming to and from breaks.

The set also has eliminated the “cash box” that sits between the contestants — and the two monitors the contestants and host use have updated, internally lit supports with more organic shapes.

That more organic look is carried through to the uniquely shaped supports that also divide key areas of the set. The new look has  a flowing, cascading feel, where the old ones recalled heavy plinths with soaring support beams.

Another big change is the introduction of horizontal bands of color-changing LED around the upper parts of the set as well as the knee wall divider between the audience risers and the central arena. 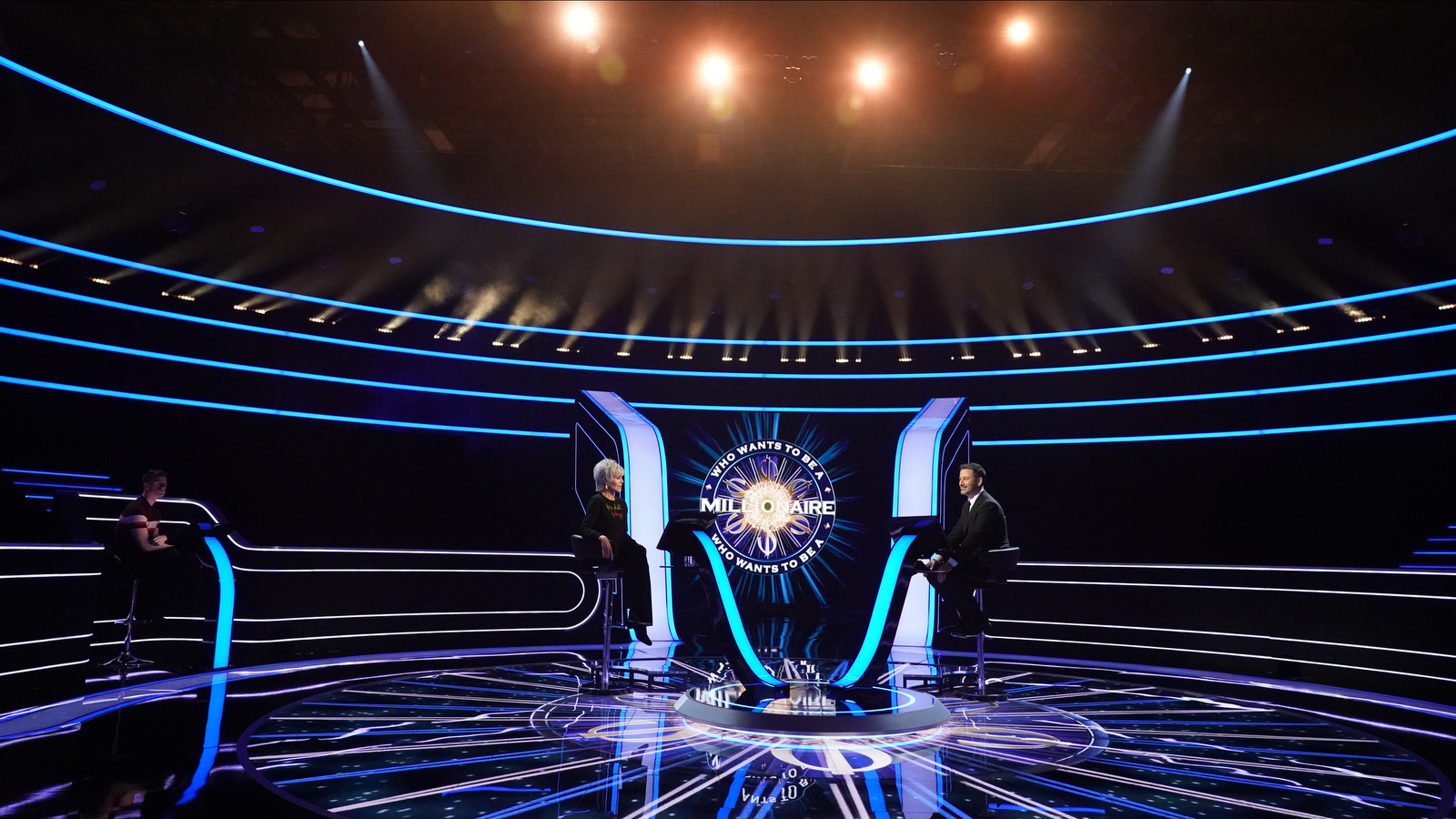 These frame the upper parts of the set as well as a frame for a ring of lighting instruments aimed inward. Unlike in previous versions, there’s no structural circular element floating above, but rather one created, once again, by lighting units.

In the initial episodes of Kimmel’s version, there is no studio audience beyond a handful of crew members. The shows were taped in mid-March, when audiences were beginning to be banned from TV studios over coronavirus concerns.

Incidentally, because there is no audience, the “ask the audience” lifeline was replaced with “ask the host.” 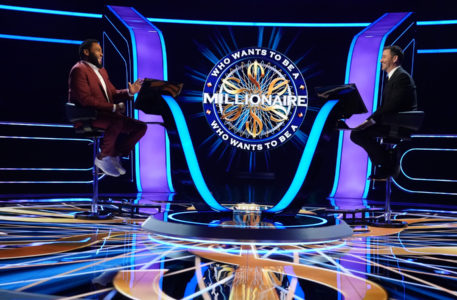 Who Wants to Be a Millionaire

Since the audience areas were typically kept rather dark the empty risers are largely unnoticeable except in wider shots when light hits the edges of the tiers. Even then, it could be interpreted as a design element that matches the horizontal banding.

There are no chairs on the risers, which also probably helps make the lack of audience a bit less obvious.

The stairs that audience members would have used to access their seats are only edge-lit on the shows that aired, rather than having the entire front of the tread illuminated, which ties into the motif of horizontal strips of light. 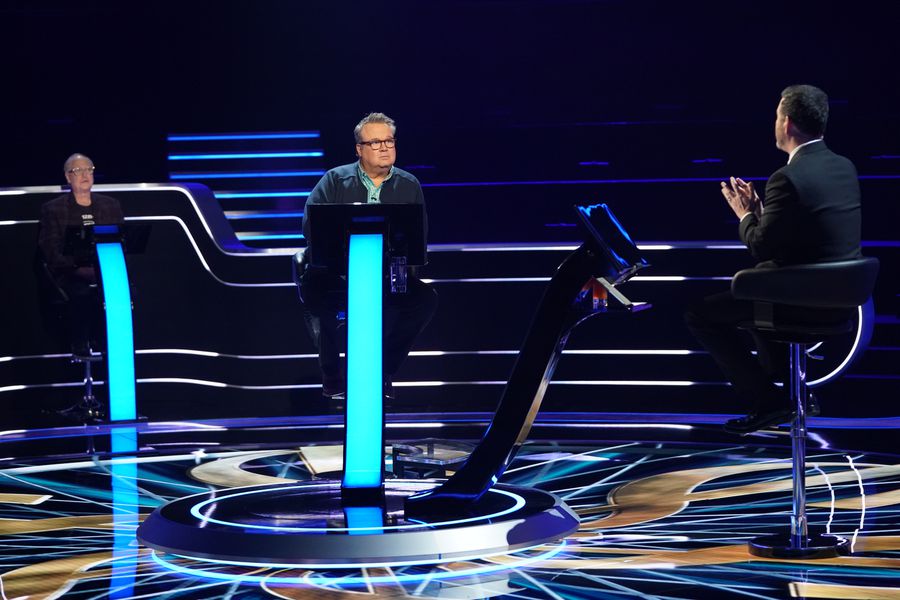 There is a place for a friend or family member, who can help the celeb for the first 10 questions, at the outer edge of the ring. The wall and lighted elements curve up and around this area, creating a sort of niche for the seat that’s emphasized by lighted bevels curved together to create rounded caps — another instance of the new look’s organic design direction.

Of course, it wouldn’t be “Millionaire” without dramatic lighting effects, which were designed by Mick Smith for this installment. Chuck Noble, who was the show’s original lighting designer, was brought in to consult on the new look.

Potion Pictures created an updated graphics package for the new show, including a rendition of the circular logo used on some previous iterations. Much of the logo is shown in the studio floor video panel. 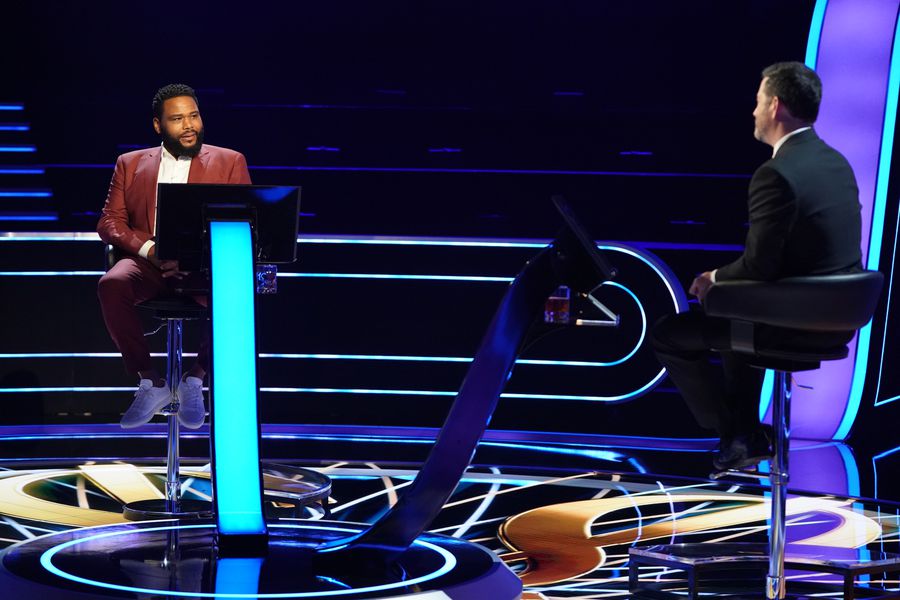 The on-screen question and multiple-choice graphics use the same general shape and style as many of the earlier designs, but with updated typography, animations and other elements.

In the U.S., “Millionaire” debuted in ABC primetime in 1999 and ran, with varying degrees of frequency, until 2002.

That version was hosted by “Live with Regis and Kelly” host Regis Philbin.

In 2007, a fire damaged the studio that “Live” shared, at the time, with the ABC affiliate’s Eyewitness News, so the show relocated to the “Millionaire” studio, which was being used for a syndicated version.

That syndicated version had debuted in 2002, but after the network version was already canceled.

Meredith Vieira was tapped to host that version, a role she held for 11 seasons, even after joining NBC’s “Today” in 2006. Her deal with ABC required typically required her to be off NBC air after 9 a.m. to avoid competing with taped versions of herself.

Vieira left in 2013 and was replaced by Cedric the Entertainer for one season, after which Terry Crews replaced him.

Chris Harrison, the host of ABC’s “The Bachelor,” took over until the show was canceled in 2019 with the show taping in Las Vegas.

While the syndicated version often aired on ABC stations, it also aired on stations associated with other networks during that run.