As part of an overhaul of its on-air look, Al Arabiya (العربية‎) constructed a massive newsroom and studio with sweeping views of Dubai that’s also packed with loads of LED video panels and a sleek, modern design with daring and dramatic twists. 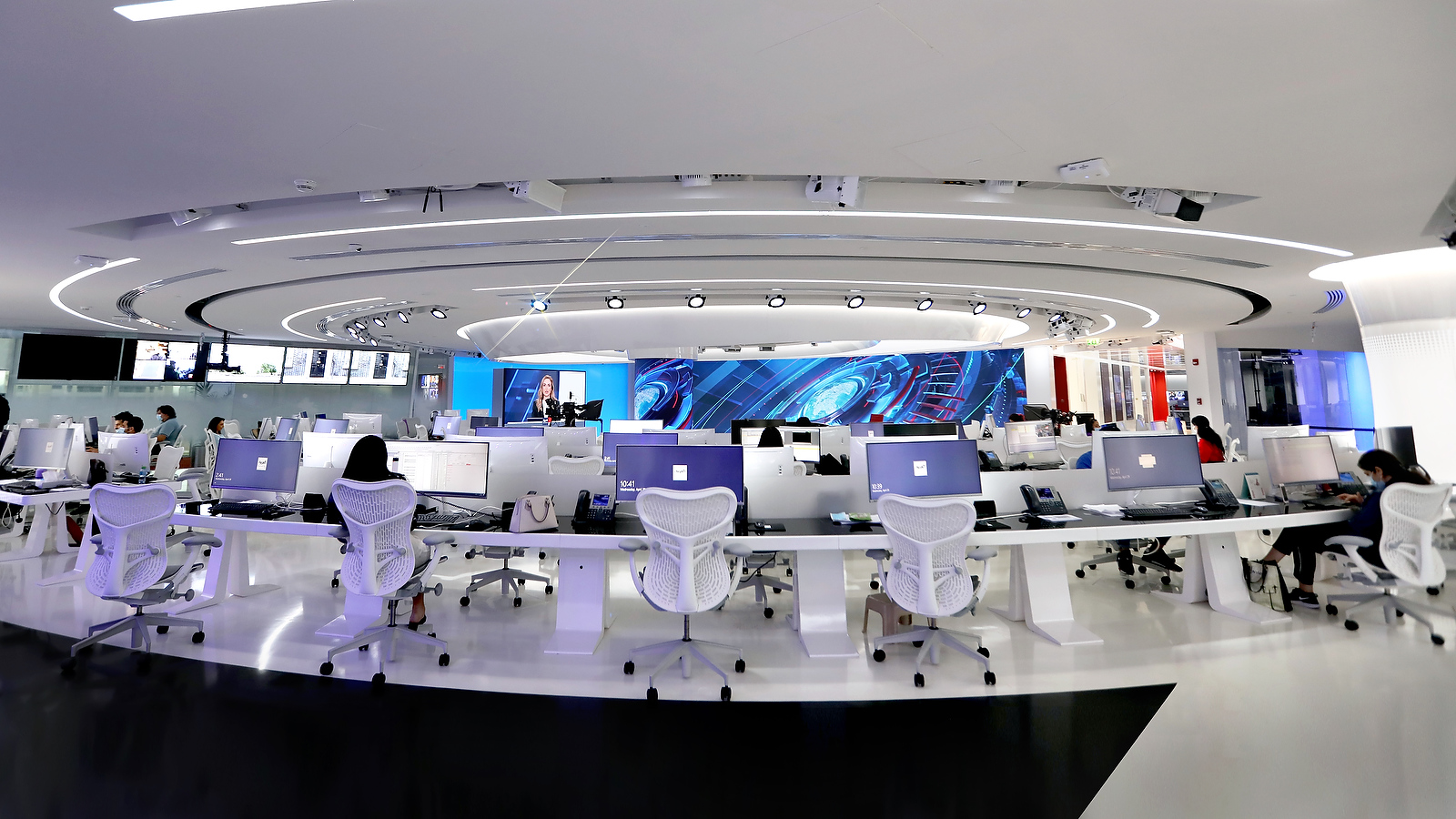 “We are relaunching with new studios, a new design and more importantly, taking advantage of new technologies that will take the viewer into the next generation of journalism across not only our television screens but also our social media and digital offerings,” said Mamdouh Almuhaini, general manager of Al Arabiya Media Network.

The new studio and workspace is designed to accompany a new logo, graphics and music package.

The overall space was strategically “designed (in an) organic way to bridge the gap between the screen and the audience and connect smoothly into the latest technologies (in) digital and … broadcast,” said Fadi Radi, Al Arabiya’s head of creative.

The 26,000-square-foot facility is located in a somewhat standard office tower not originally intended to be TV studio space, so fitting a multivenue studio along with 238 editorial workstations, 10 private offices and more was just one of the initial hurdles the design team at Clickspring Design needed to overcome, notes senior design director Murat Ustuner.

“Because the whole floor houses both editorial working space and broadcast shooting locations, we tried to find a way to isolate shooting locations in a way that works with the high-end design look,” explained Ustuner.

In addition, the space, like most multi-floor commercial real estate properties, has a utility stack for elevators, mechanical rooms and restrooms smack dab in the middle of the floor plan. This, along with the rectangular footprint of the building, creates two rather narrow spaces that needed to be quite literally designed around.

Throw in structural support columns that couldn’t be moved and you’re left with a space that provided plenty of challenges for the design team.

The tracks in the ceiling were meticulously mapped out and coordinated with workstation and scenic placement, including flowing glossy white headers, in order to allow the camera here to capture wide, sweeping views of the newsroom and production areas.

The two more open pockets on either side of the core stack were identified as being ideal for the main newsroom and studio spaces, while the narrower of the two passages connecting the two spaces was filled in with enclosed areas for media management, IT racks and HVAC equipment.

Meanwhile, the elevator shafts and other support facilities were wrapped on three sides by curved swaths of video walls that, when viewed from above, form an organic, ovoid shape tilted slightly to one side, emphasizing the concept of natural, free flow that is found in much of the design.

These curved walls also gave designers a way to tuck in an employee lounge and kitchen, green room and lighting rack room as well as some glassed-in conference rooms.

Wrapping around roughly half the oval in the middle of the building are two tracks with one robotic camera each. One is mounted on the ceiling and the other on the floor. This gives the broadcaster the opportunity to “shift the vantage point from high to low, creating additional perceived height on air,” pointed out Steven Dvorak, Clickspring’s vice president of design.

The tracks in the ceiling were meticulously mapped out and coordinated with workstation and scenic placement, including sleek glossy white headers, in order to allow the camera here to capture wide, sweeping views of the newsroom and production areas.

The glossy white high-end look was achieved thanks to custom epoxy coatings, including careful planning of the floor markings in white and bold black and grays.

The structural columns were “hidden” by constructing sleek, internally lit scenic elements with frosted design accents and outfitted with convex LED on the inner faces. 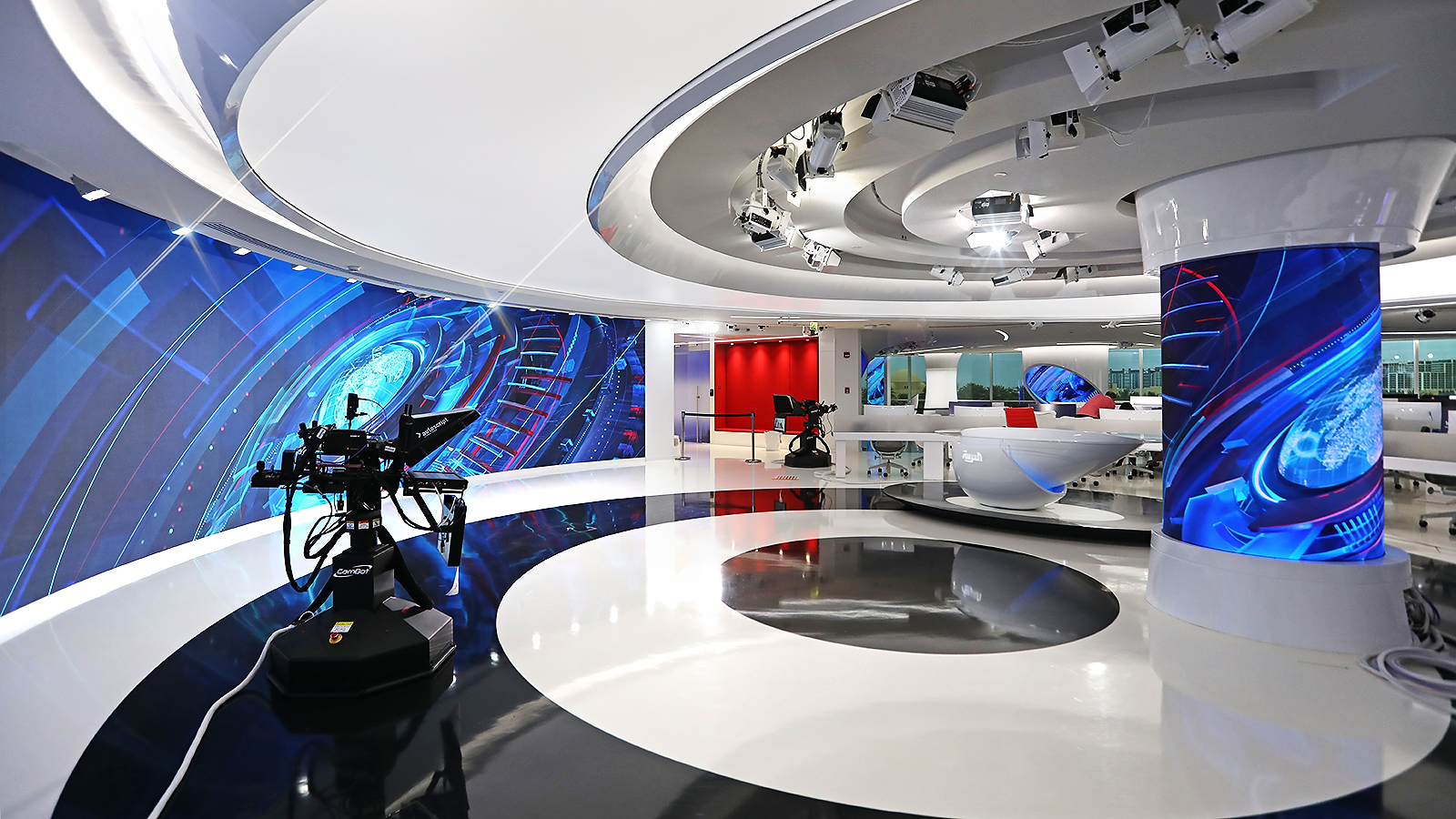 In an area known as the “Command Center,” a small but impressive curved video wall sweeps around an oval, glass-top anchor desk with a glossy segmented base. There’s also a standup area set up to allow for toss shots and the space can be reconfigured to support everything from a single person or panel discussions.

Ringing the command area are concentric rows of curved workstations that closely match the path of the circle markings on the center of the floor. 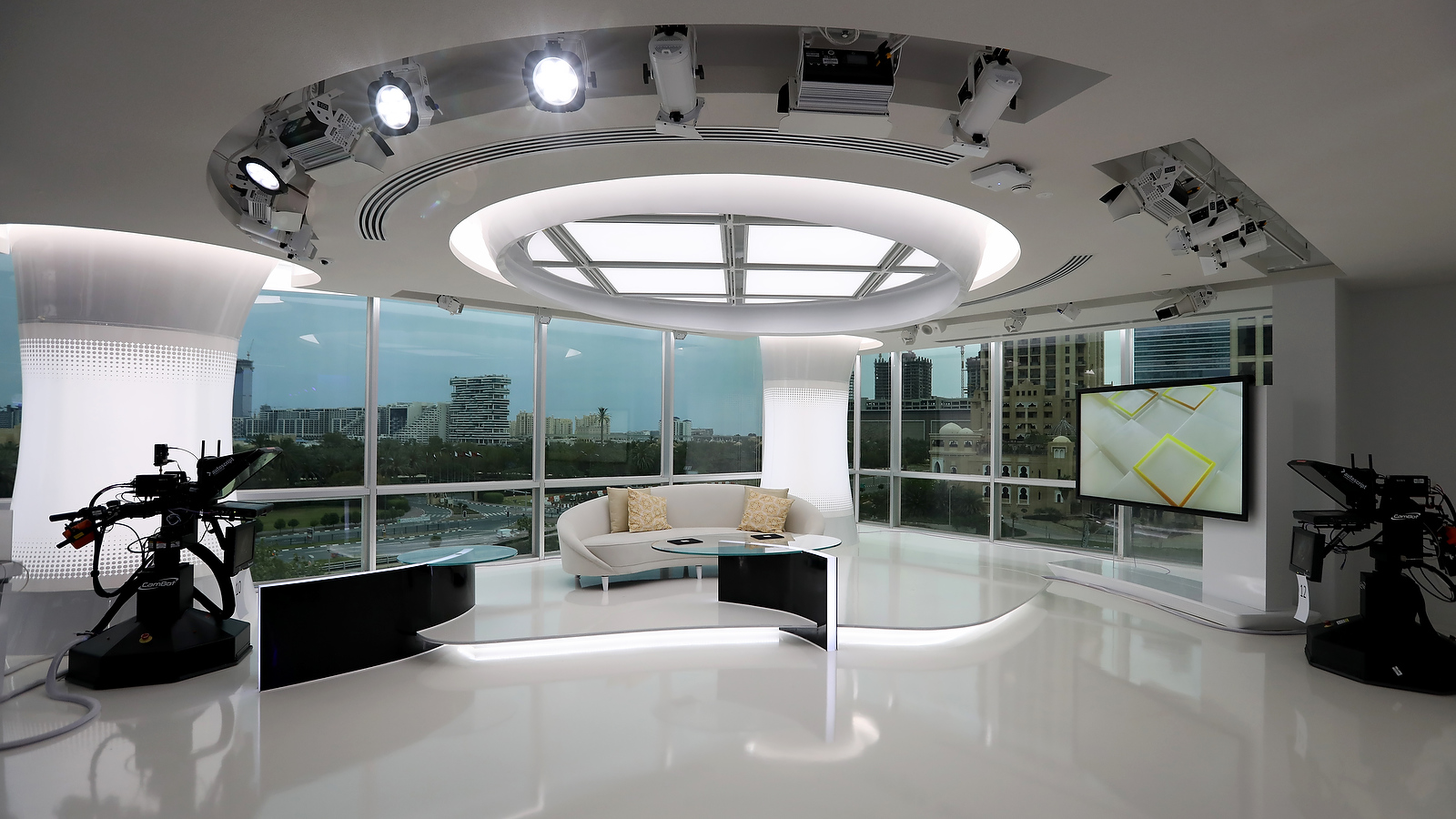 Nearby, in a prized corner position, is a flexible space that allows for a less formal discussion set.

There’s a wild riser with bold black curved elements that form a unique take on coffee tables as well as a movable monitor for both standup graphics and remote guests. 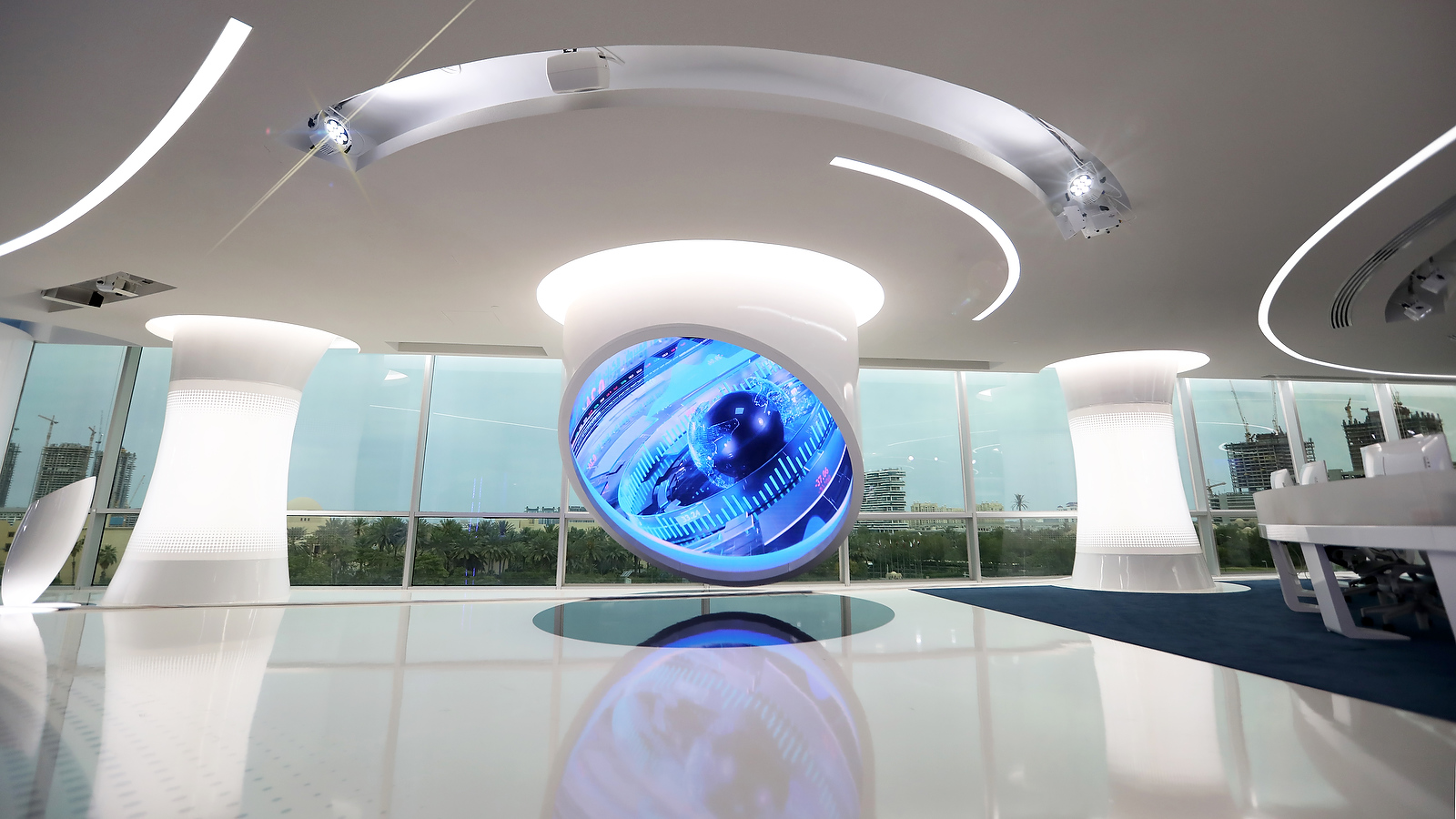 A smaller ring of workstations separates the corner area and a ceiling-mounted “shroud” that looks a bit like a futuristic portal. Instead of being a gateway to another dimension, though, the interior is outfitted with LED video panels.

Clickspring’s team carefully applied LED video technology according to the ‘size and proportions that respond to the needs of the content and the nature of the narrative used to communicate the story.’

“This serves a cool looking jewel hanging down from the ceiling and provides the ideal support for the camera shooting plans,” said Ustener.

While the shroud was designed with weather segments in mind, it’s already been used for a variety of other segments. 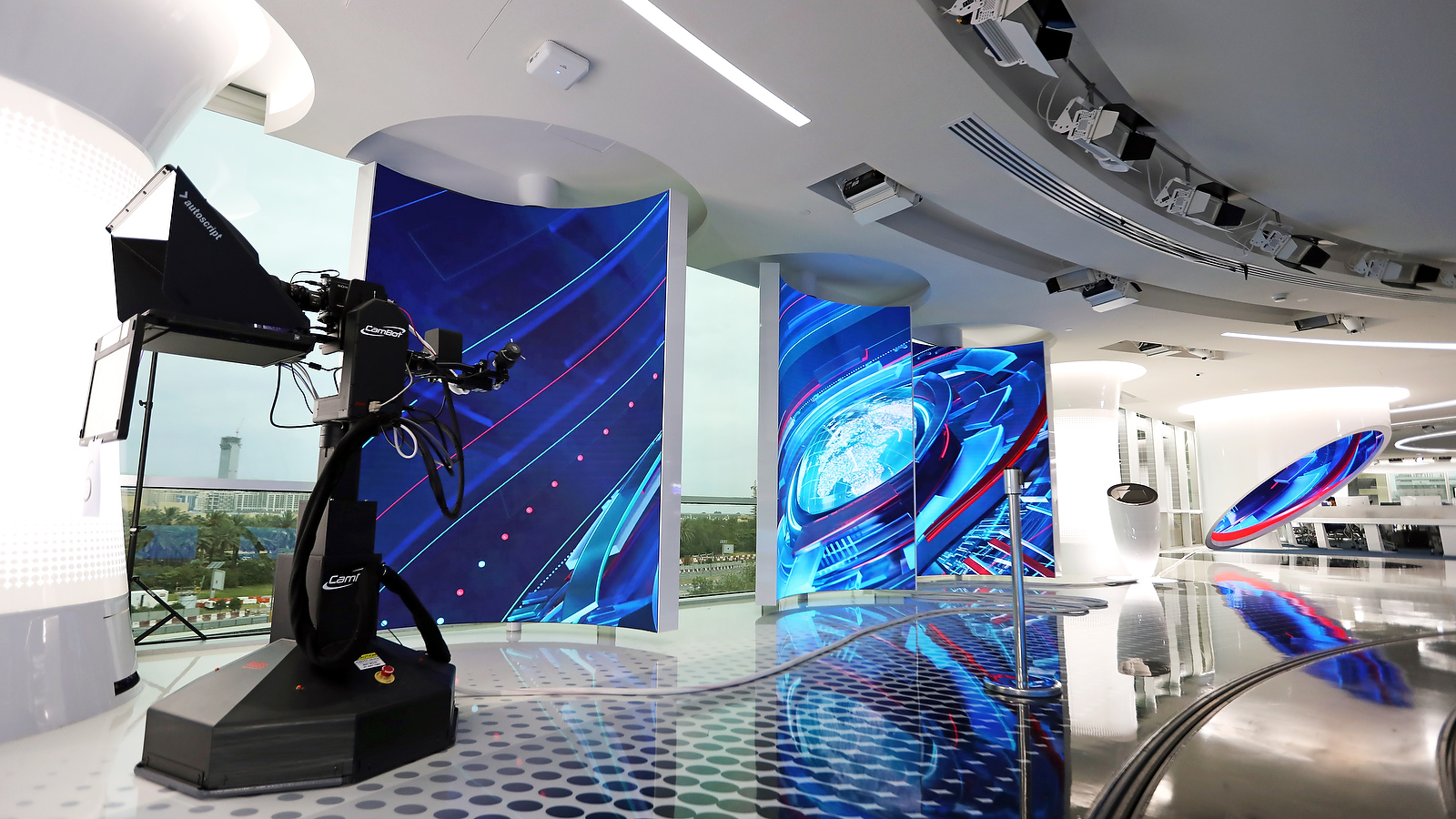 Next to this area is the social media center, which features three concave curved LED towers that pivot, backed by sweeping exterior views.

Because of how narrow this area is, the pivoting mechanism gives the option to shoot from either side rather than straight on.

During the design process, Clickspring’s team carefully applied LED video technology according to the “size and proportions that respond to the needs of the content and the nature of the narrative used to communicate the story,” said Dvorak, rather than adhering to the traditional 16:9 aspect ratio.

“News coverage of longer more in-depth reporting, encompassing a variety of related events, long LED ribbons support multiple highlights and a walkalong, linear narrative from beginning to conclusion,” said Dvorak. “(For) reports with heavy analytics such as business news, the arrays were given enough area to present multiple graphics in a dynamic dashboard format.”

The social media space flows into another anchor area designated for business news that serves as a transition between the narrower social media area before opening up to create a sort of high tech “tunnel” complete with circular decals and an LED floor panel installation along with a curved header element that “curtains” the inner video wall. 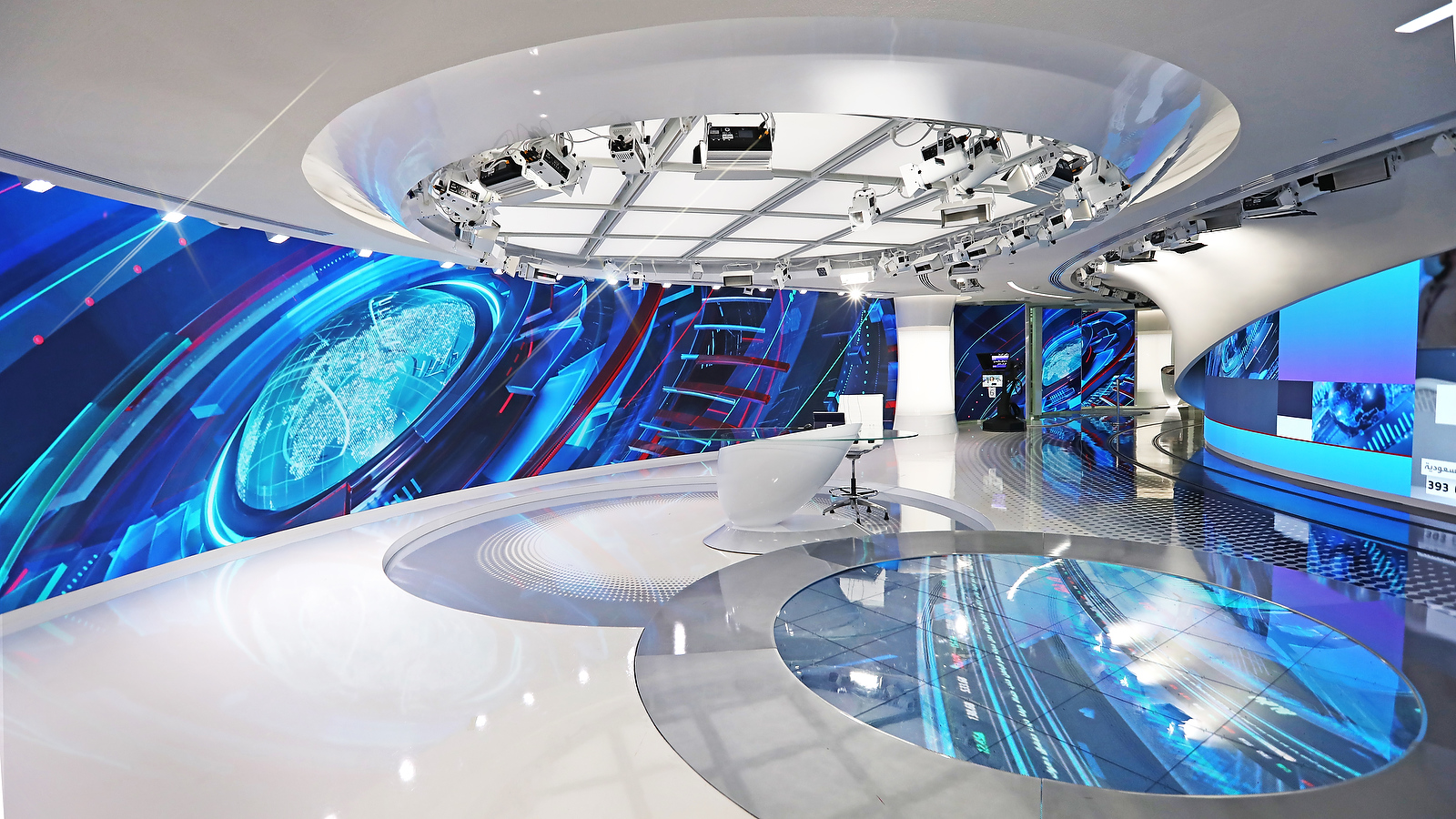 The business area with LED panels in the floor.

Another section of workstations sits behind the freestanding LED wall in this area as well as the middle of this side of the space while a “current affairs” broadcast venue is nestled among some smaller curved segments of desks and enclosed offices. 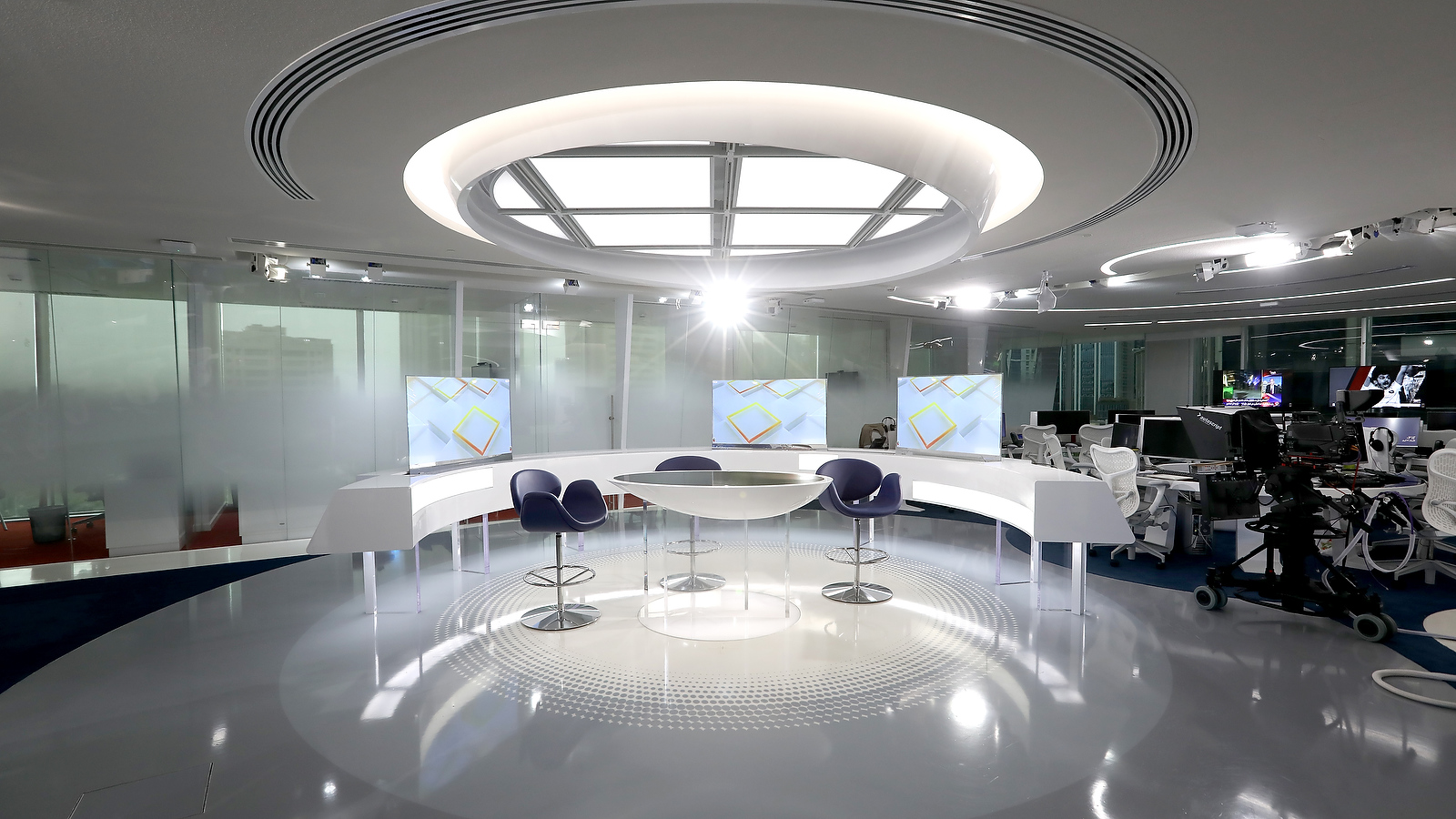 Think legs support a glossy curved desk within a semi-circular half wall topped with semitransparent video panels that can slide around in a variety of configurations — allowing it to be used to bring in remote guests or as background elements.

Behind this area is a wall of small glassed-in private offices fronted by large glass walls with a band of frost running down the middle. The frost gently fades out into clear glass above and below its center, creating an eyecatching background that echos a similar pattern found in other elements of the facility while also offering privacy and removing distractions from behind talent.

In addition to the extensive hard scenic options, Clickspring also created spaces that were specifically designed for augmented reality. They included countless examples of storytelling in the renderings shown to Al Arabiya.

The circular LED floor tiles are primed for augmented reality applications, as is that ceiling-mounted “shroud.” The set’s various LED video walls also become windows for virtual reality extensions to add layers to a story