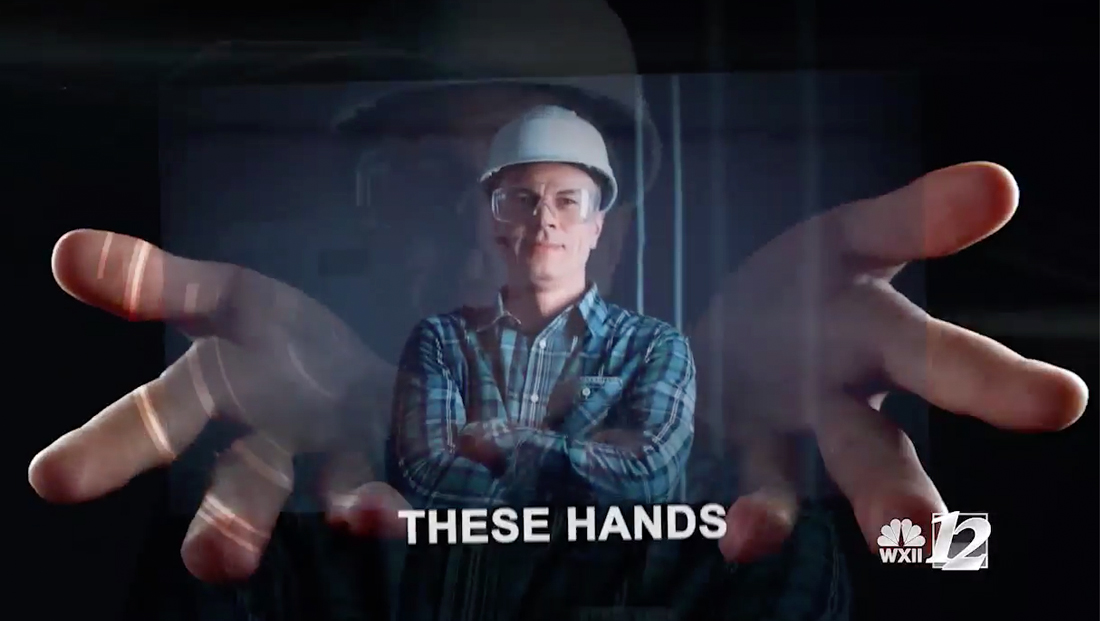 Winston-Salem, North Carolina’s NBC affiliate is emphasizing the contributions its new set made to local small businesses that may be facing challenges due to the coronavirus pandemic.

In the slowly paced, elegant promo, WXII, which is owned by Hearst, starts by noting that “everyone needs small businesses … and we do too.”

“During these times, these hands have helped to shape the future of WXII,” the female announcer continues.

Meanwhile, on screen, viewers see a close-up shot of a pair of hands opening toward the lens as a floating graphic appears between them, with its transparent green-blue frame tracking along with the subtle movement of the person’s hands.

Overall, the effect is sort of a blend between a holographic augmented reality element and a futuristic “handheld” hologram.

The image inside the pair of hands is a construction worker with a white hard hat, protective eyewear and a shirt that matches the color scheme of the floating frame he’s in. The same worker’s face is visible in the background, albeit in shadow.

Next two other construction workers appear, though one, a man in blue painters’ overalls, isn’t wearing the same shirt as the other two.

There is then a series of shots showing various construction work being done, following by a quick view of a timelapse set construction image and mostly tightly framed views of talent on the new set.

Finally, the spot ends with another view of opening hands “holding” a translucent card reading “Coming July 2020” along with the station’s logo before it disappears when the hands close.