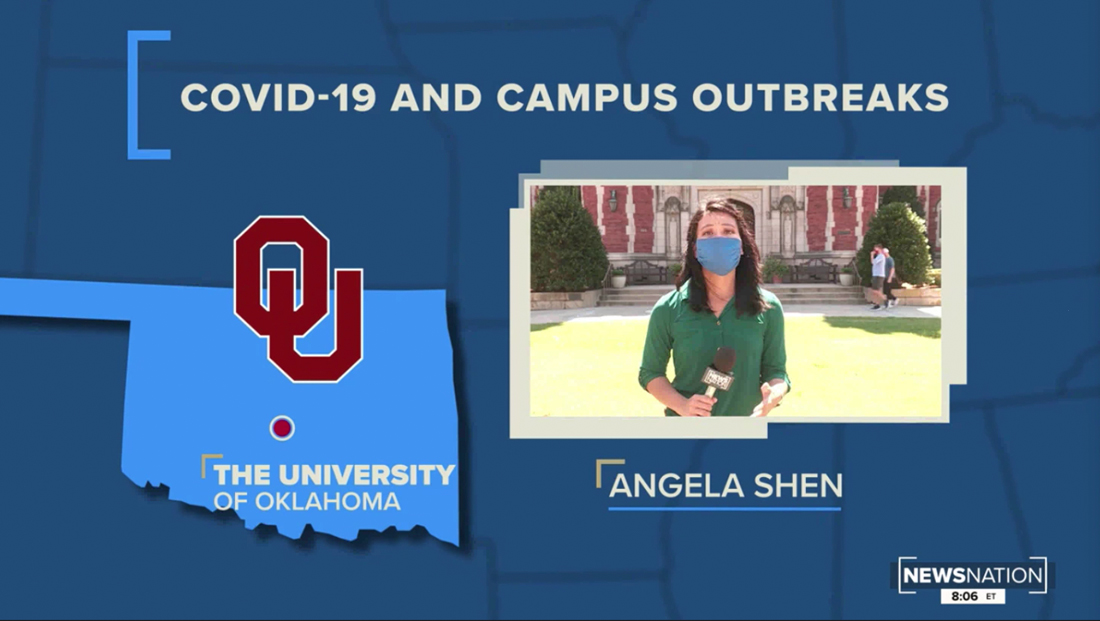 The segment aired Sept. 3, 2020, the new primetime newscast’s third night on the air.

While the newscast has, in its short time on the air, been focused on national news, including state, regional and local stories, this segment’s strength was that it was able to take a single story and show off related reporting from across the country.

The broadcast used an animated fullscreen map that would zoom in on the correct state, along with a subtle “blip” sound effect, and highlight the state in question.

A reporter’s standup and name would then appear next to his or her location and, in this case, college logo before the standup was taken fullscreen.

Between each report, the map in the newscast’s signature dark blue and beige graphics package, would change focal points with the same information appearing on screen.

Participating in the segment were Aaron Cantrell from WXIN in Indianapolis, reporting from Indiana University, Angela Shen from KFOR in Oklahoma City and the University of Oklahoma and Jamie DeLine from WTEN in Albany at SUNY Oneota.

Cantrell, Shen and DeLine all appeared on camera with “NewsNation” branded mic flags that Nexstar shipped to all of its stations earlier this year.

While “NewsNation” does include coverage from around the nation, including footage gathered by local stations, this has been largely relegated to anchor voiceovers until this point.

In an interview with NewscastStudio, Blake Russell, the company’s executive vice president of station operations and content development, noted that the broadcast would not roll out all of its features at once but instead take a phased approach introducing new features as the newscast settled in — and the story demanded it.

So far, the broadcast has featured a local news roundup that hopscotches around the country, delineated by state themed wipes and locator lines, but the college report was notable in that it tied local reports around a single, cohesive theme.

While it could have been tempting to use the multiple video walls and monitors on the two story set Nexstar built for the show to facilitate the transition from location to location, the fullscreen approach kept the focus on the locations and reports themselves.