When Nexstar Media Group embarked on the ambitious plan to launch a three-hour primetime national newscast in less than a year, there was no way to predict the world would change shortly after work began.

In part one of our extensive look behind the launch of “NewsNation,” we uncover the unique beginnings of the newscast and its creation during the coronavirus pandemic.

The coronavirus pandemic would prove to be a monumental shift that would both affect how Nexstar’s planning would proceed while also increasing the demand for the very product it would be producing.

At the same time it revealed its plans, Nexstar indicated that the newscast, which would air from 8 to 11 p.m. eastern, would be based in the heartland of America — Chicago.

Originating from the historic WGN studios in the North Center neighborhood in the Windy City, plans called for the newscast to link every Nexstar newsroom across the country.

The geographic placement, along with the brand, would become symbolic in the sense that this would be a different kind of national newscast.

“We’re utilizing 5,400 journalists from across the United States — that’s over 100 news producing markets,” said Blake Russell, executive vice president of station operations and content development for Nexstar who headed up the project from the corporate side. 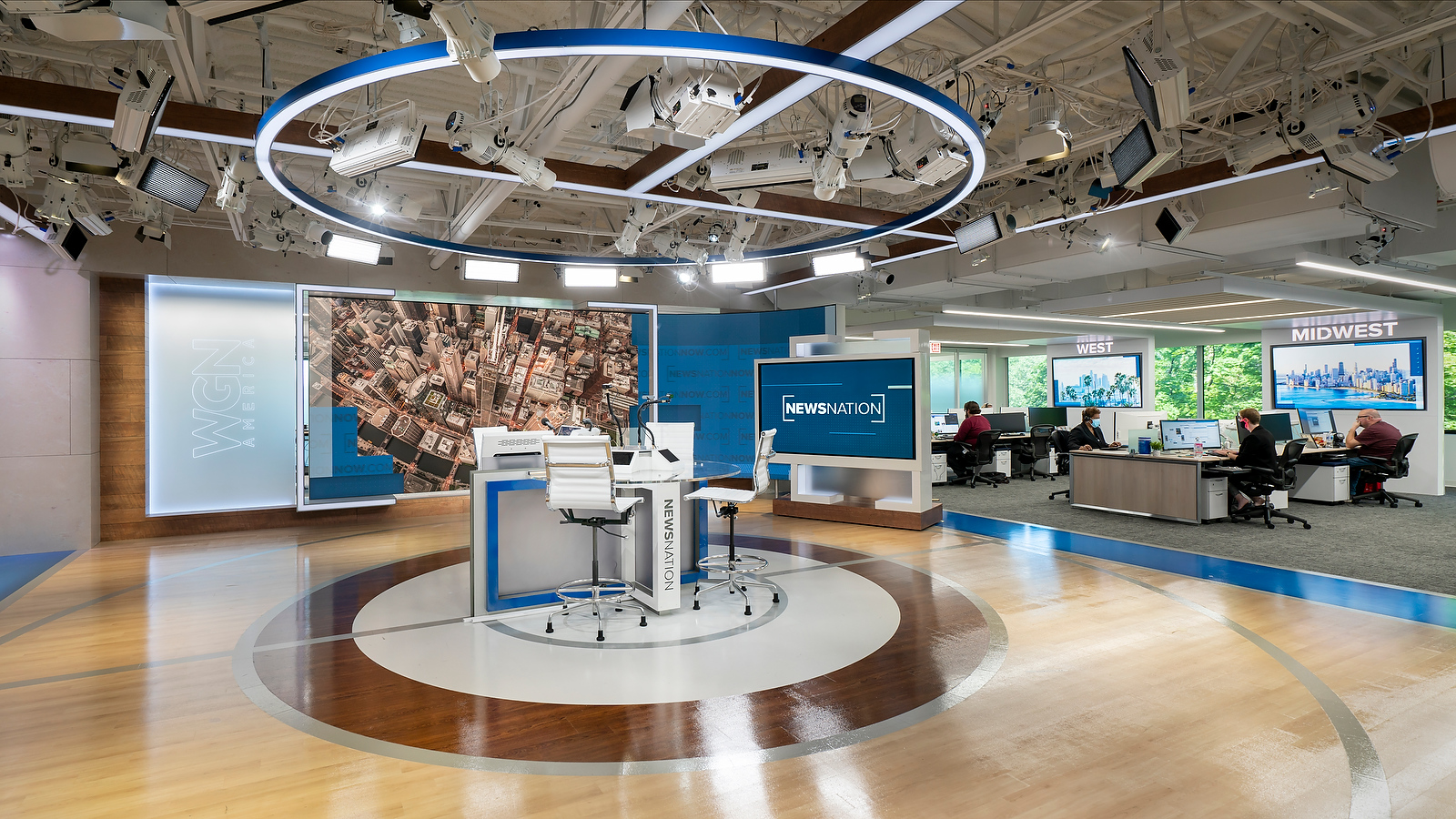 Russell noted that the Chicago facility has been engineered to be able to take content from a myriad of live field sources from any of its stations. “NewsNation” producers and directors can dip in to live feeds from across the country, giving them the opportunity to leverage the power of the organization’s massive footprint, spanning most of the continental U.S.

It’s that approach that Nexstar hopes will make its offering stand out in a crowded news scene and bring viewers a dynamic newscast that spotlights local stories on the national stage that is WGN America.

While Nexstar was already large before its 2019 acquisition of Tribune Media, the sale, along with a series of other strategic purchases prior, has created the largest TV station group in the country — hence its ability to draw on over 5,000 journalists.

Russell noted that not only was this the most extensive project he’s worked on in his 20-plus years with the company, it also had the added challenge of having to be done not only on a short turnaround but also, in turned out, during a pandemic.

When coronavirus hit the U.S., Russell was able to keep the project momentum going, meaning that there was only about a week where physical work stopped completely. He kept managing it nonstop from afar.

‘Building this in the timeline that we did was amazing but when you throw the COVID piece in there, it was just extraordinary.’

Chicago was hit hard by the pandemic, which upended the construction industry of a city that’s famous for its buildings — with many projects coming to a halt or being canceled.

Nexstar, as an essential business, was able to bring on some of these displaced workers for the “NewsNation” project while following the state and city recommendations on PPE and social distancing.

All told, Nexstar overhauled Studio 3, formerly the home of the local newscasts produced by WGN with a sprawling multistory set. It also built out a combination newsroom and open studio on the second floor of the station in space that was added during a building expansion about a decade ago. 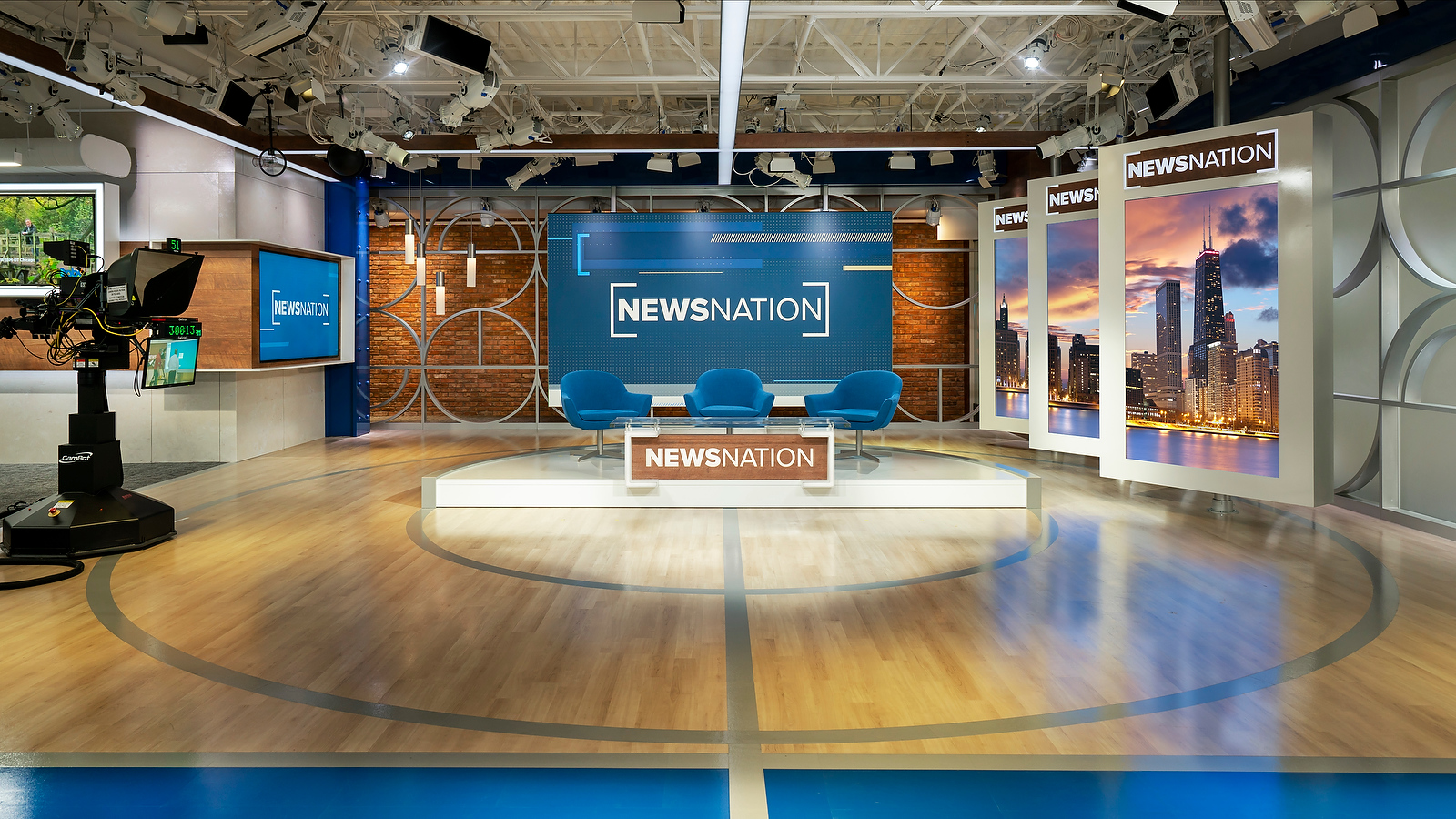 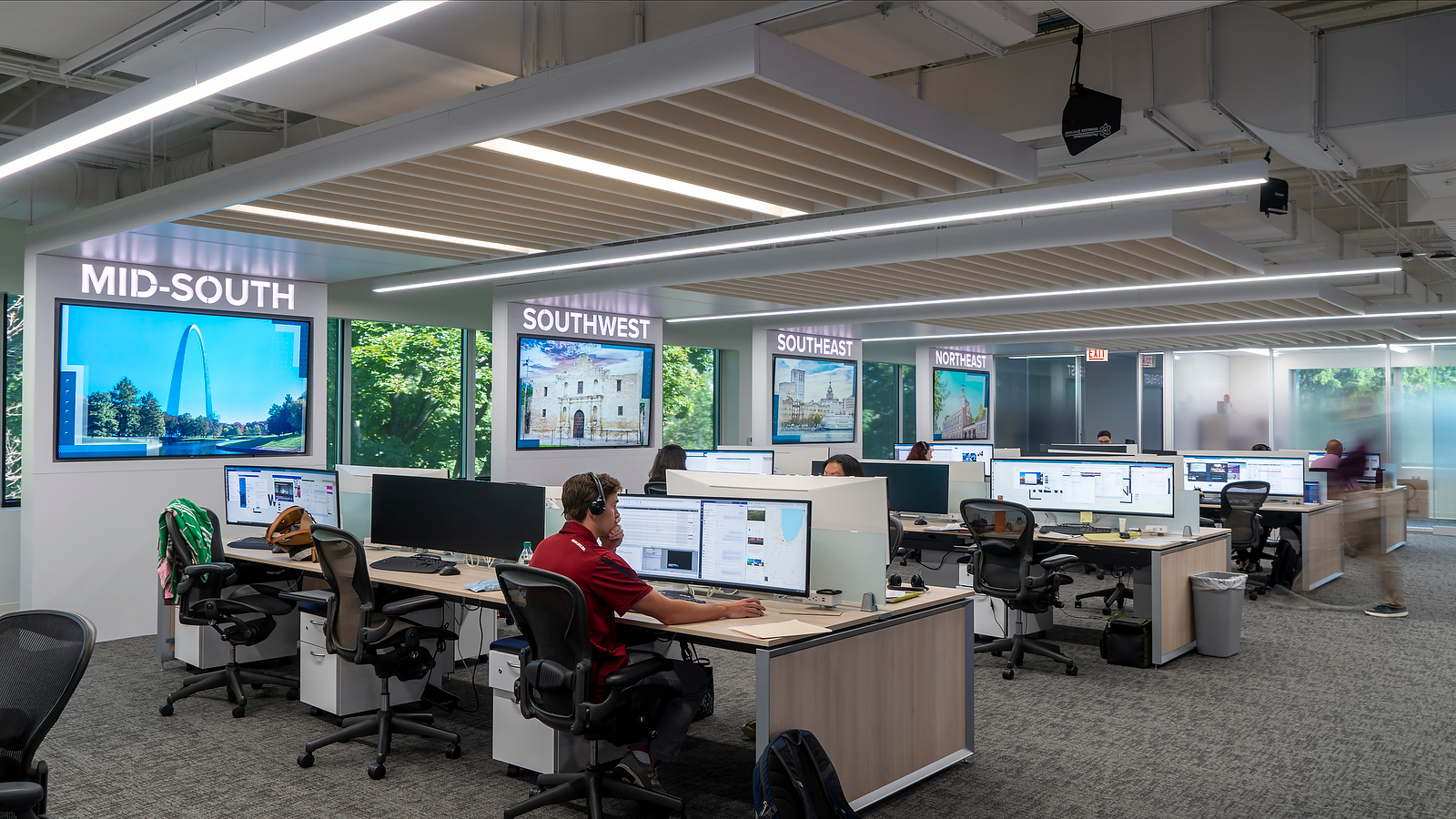 Shortly after the announcement of plans to create “NewsNation,” Nexstar also got a meeting with the strategy team at Troika on the books to discuss its branding and graphics needs.

Troika was tasked with creating a slew of creative assets while also developing a branding strategy simultaneously. Some of those creative needs were almost immediate — Nexstar needed materials to help present the newscast to advertisers in its WGN America upfront. 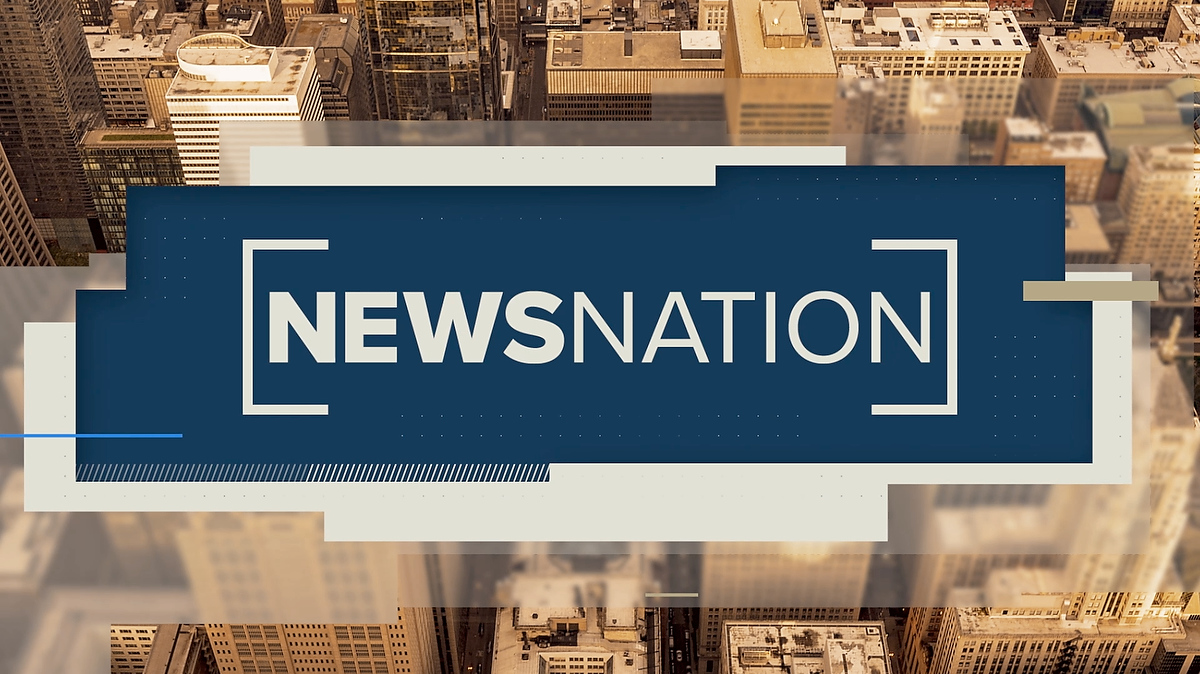 Troika went to work and, working closely with the team in Chicago and Russell, who is based in Texas, created the bracketed “NewsNation” logo that would later drive much of the on-air look — both in terms of the set and graphics — as a way to emphasize its focus on straightforward news.

The teams created an overall sense of the brand, distilled into two taglines: “Your news. Your nation.” along with “News not talk. Facts not opinion” as a way to express the mission of “NewsNation.”

“We definitely wanted it to speak to the aspects of being personal and relevant, but also having a broad reach,” said Kevin Aratari, head of business development at Troika.

For its part, Troika was already well equipped to serving clients remotely since it works with brands around the globe. The team was able to slip in an in-person “intake” meeting before the coronavirus pandemic hit, but did the rest of the work remotely.

Meanwhile, back in Chicago, as the backbones needed to make the broadcast possible were installed, attention shifted to the on-air look and sound.

This included a custom set design from Clickspring Design, insert and fullscreen graphics from Troika as well as visual guidelines on how to fill the numerous on-set video walls and panels with fresh and topical graphics — and bespoke audio branding from Stephen Arnold Music. 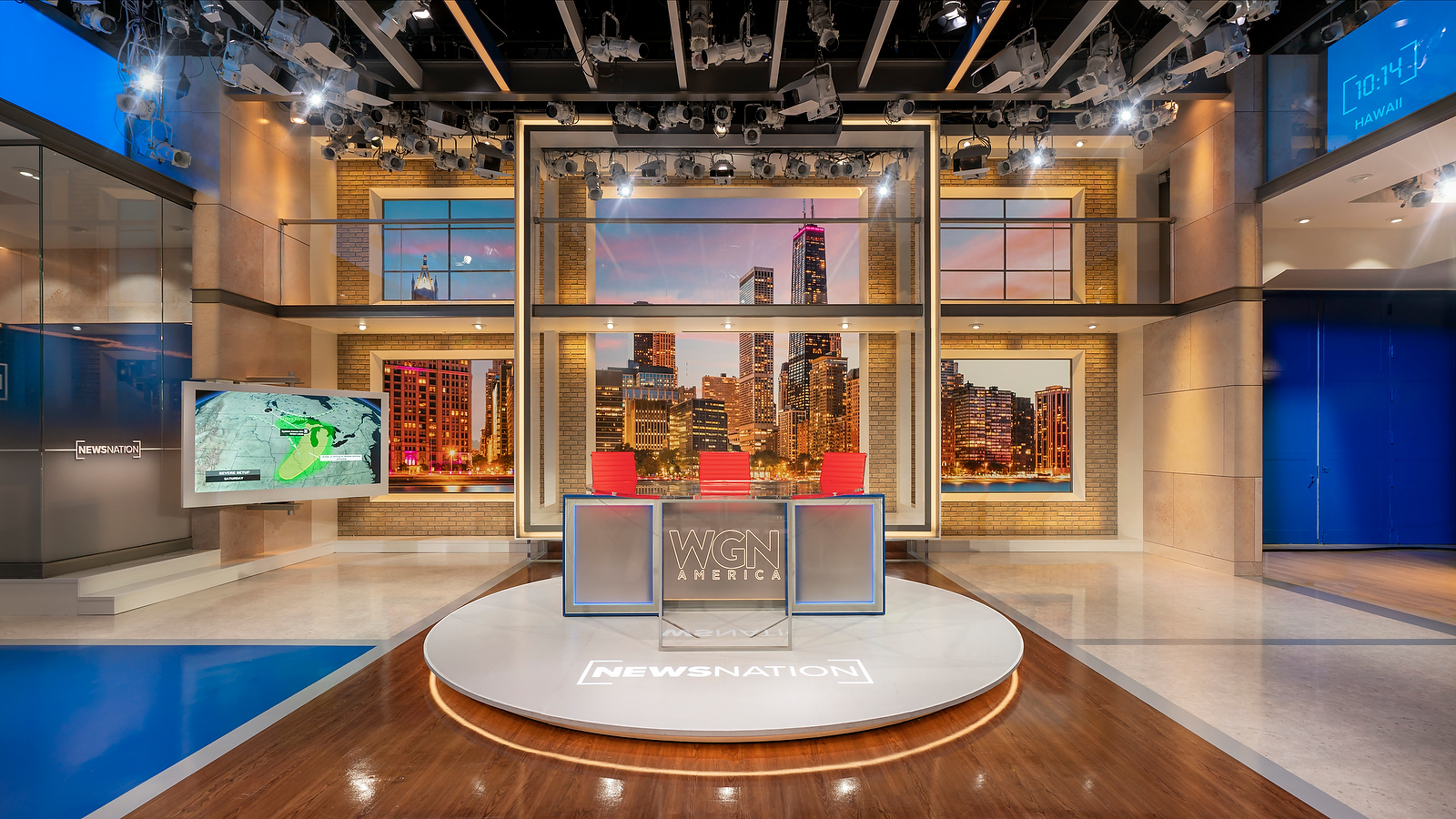 The set of ‘NewsNation’ in Studio 3 at the historic WGN studios in Chicago.

For its part, Clickspring started by creating a rough layout of how the set would fill the studio — and then quickly identified the brackets in the logo as a strong structural look that found its way into numerous parts of the set.

“It’s not often we get to design a set at the genesis of a brand, so we certainly wanted the two things to correlate. I don’t think we went too far hitting people over the head with it but we leaned in heavily as a motif,” said Clickspring’s Vice President of Design Emmett Aiello.

“They wanted the whole presentation of this to come from the fact that Nexstar has all these newsrooms scattered across the whole collective country, not just in the top 10 markets,” notes Chad Cook of Stephen Arnold Music. “We wanted the music to have a sense of authenticity and trust, very organic and something that would appeal to someone in a large city or to someone in a smaller rural community. Something that felt genuine and had a little bit of a Heartland in it.”

However, that primetime timeslot is just the start for what Nexstar hopes to do with “NewsNation.” Plans are already in the works to offer news and original content throughout the day via digital platforms.

As for the look of the three-hour production, expect that to evolve and grow over time as well.

That consistency will always include a focus on generating straightforward news without bias while also drawing on its talent from across the country and give viewers a unique perspective of what’s happening across the U.S. every night.