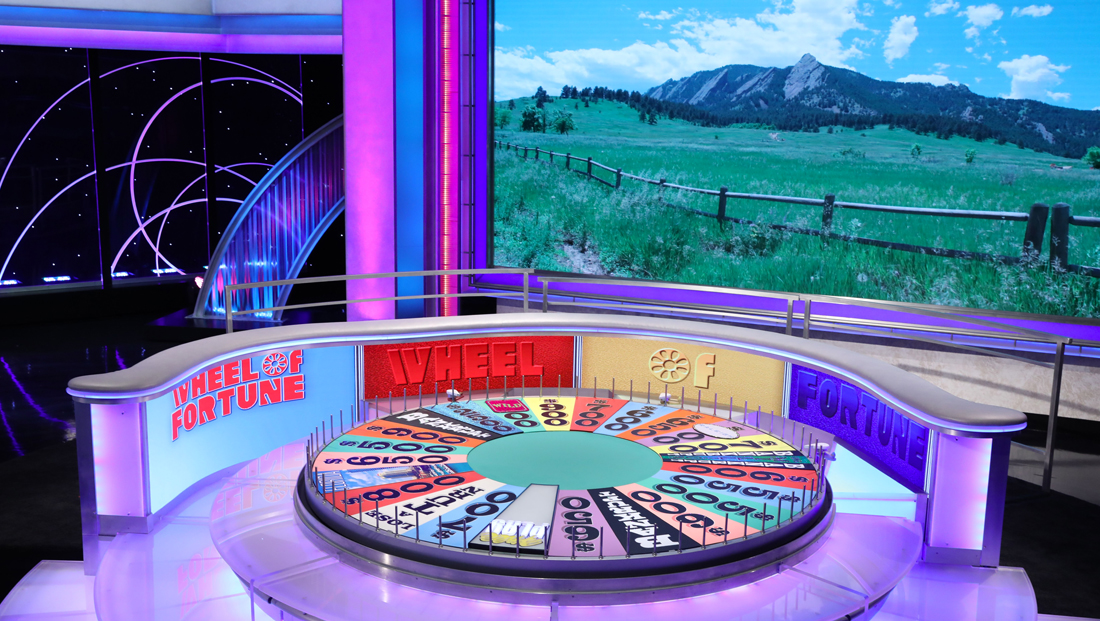 “Wheel of Fortune,” like many TV productions, has had to adapt to the world of coronavirus and, in addition to a socially distanced set update, the show also had to tweak how contestants spin the iconic wheel.

What’s the big ‘never before happened’ surprise ‘Wheel of Fortune’ has in store? https://t.co/U6e62FaTlB #TVNews #BroadcastNews

For its 38th season starting Sept. 14, 2020, “Wheel” updated the half wall that host Pat Sajak and contestants stand behind to be much wider, allowing for six feet between everyone.

The result is an almost half circle installation.

The expanded structure also required the show to expand the size of the LED panels that front the half wall and that display various graphics, including, during normal gameplay, the “Wheel” logo, color coded contestant scoreboards and flashing indicators to show whose turn it is.

In addition, the white arrow “flippers” that help point to the wedge a contestant lands on remain installed in the half wall. 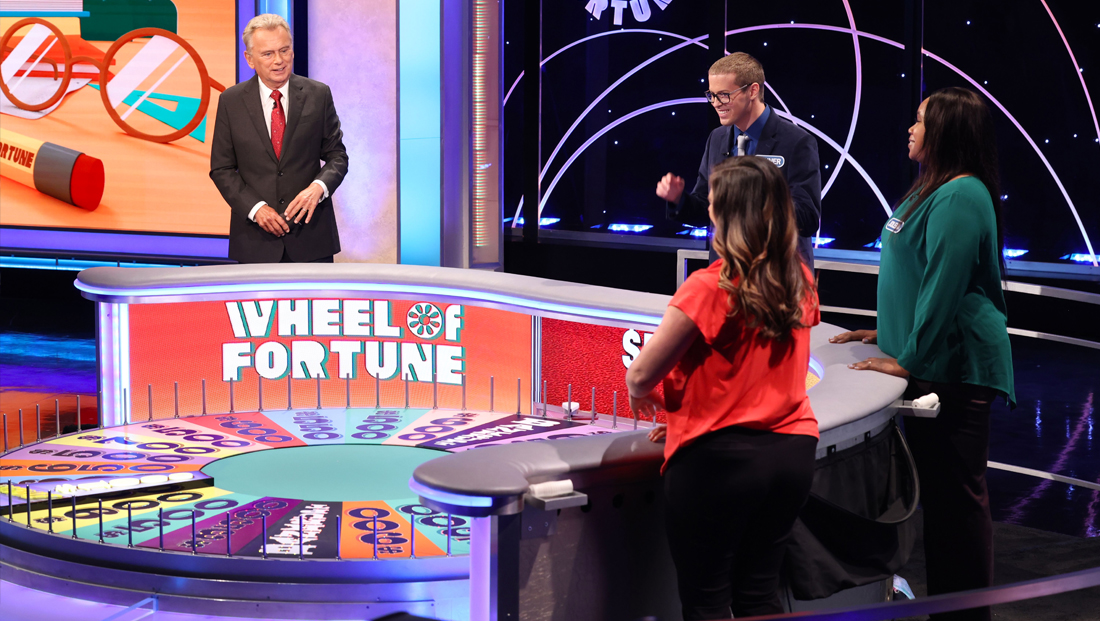 Producers also had to rethink how contestants would spin the wheel, since it normally requires direct contact with one of the 37 metal pins that ring it.

The solution was elegant — a white “cap” that contestants hold in their hand and place over one of the metal spikes — thus preventing any direct contact with the wheel but still allowing for control over the spin.

Not surprising given the show’s name, spinning the wheel is a key part of gameplay, with a variety of “superstitions” involved — so it was key to let contestants continue to determine the amount of force or “technique” to spinning (some of that tradition can include the rally cry of “Big money!” that many fans have a love-hate relationship with). 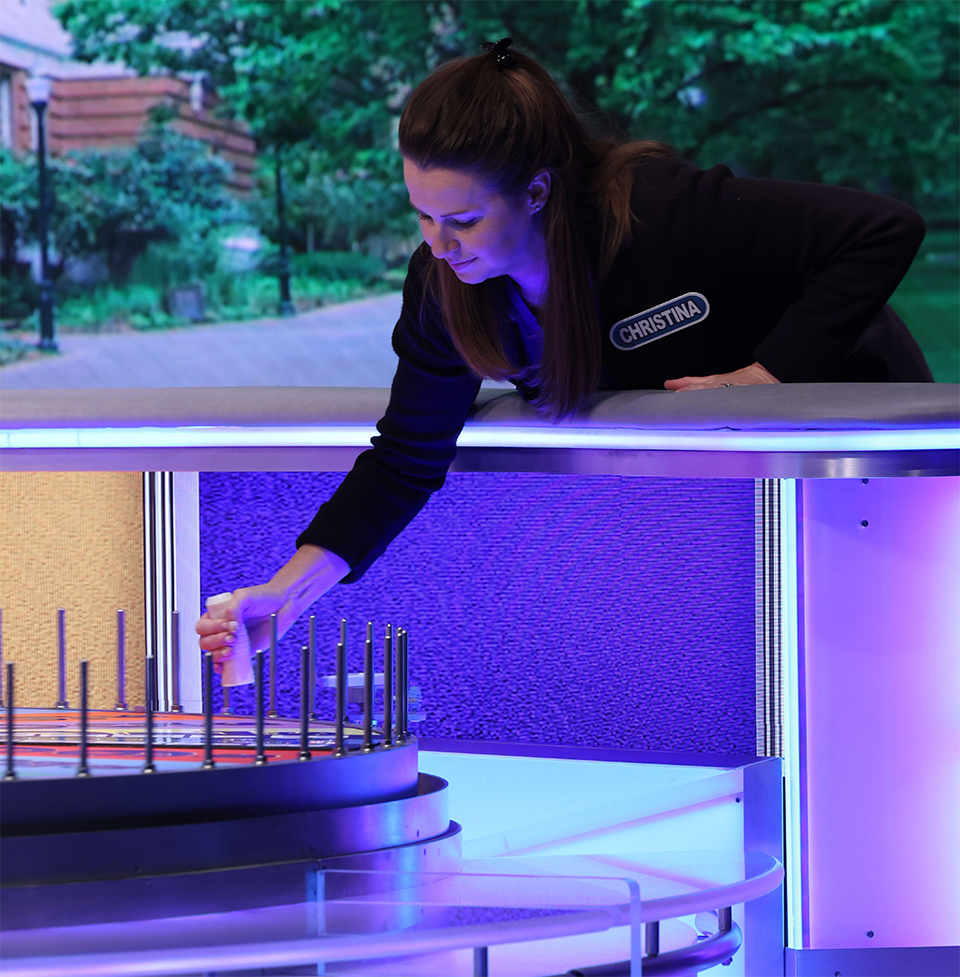 Detail of a contestant using one of the ‘caps’ to spin. Photos courtesy ‘Wheel of Fortune.’

Crew presumably can swap out or sanitize the caps between each taping when contestants switch out.

In some ways, the caps look similar to the handheld buzzers use on many game shows — including “Wheel” and sister show “Jeopardy!,” which also had to adapt its set due to COVID.

The wheel, which purportedly weighs over two tons, has been largely unchanged over the past few decades — with the color scheme and font shown on the wedges getting only minor updates.

The wheel’s wedges can be changed out as needed for gameplay.

(In other news, “Wheel” says something that’s never happened before on its show happens in the first two weeks of Season 38).

However, one of the big additions over the years was a custom manufactured “video wedge” that creates an “animated” segment that can be changed electronically.

In previous seasons, the wedge would even change values during spins and, if a contestant’s flipper landed on it, they would be subject to whatever action was displayed on the wedge.

The new half wall features small trays for storing “The White Thing,” as Sajak has coined it, when not in use.

Vanna White, who serves as co-host, has always spent most of the show well away from the main contestant and host area, so her role has, in a way, always been at least somewhat socially distanced, though she does typically enter the studio with Sajak and joins him in the center of the set for sign off.

White is typically the only person who touches the puzzle board — which was converted from trilons that White had to turn manually to individual video screens in 1997.

That update included the addition of touch sensitive border elements that White would “press” to reveal the letter behind the particular screen. The screens show a teal “Wheel” logo pattern for spaces not part of the puzzle and become white to show a “blank” for each letter or punctuation in the puzzle.

After a contestant calls a letter, the corresponding panels, if any, turn blue along with a sound effect, before White’s touch causes the letter to be revealed.

The game board is controlled using custom software.

“Wheel” has also implemented “rigorous” testing procedures for its talent, crew and contestants, though it did not provide details in a statement.

Despite all these changes, the show’s popular format will remain the same — the only exception being the now annual increase of the minimum prize for bonus round winners to $38,000 (the show typically changes it to the season number multiplied by $1,000 each year).