How the networks covered the Friday evening death of RBG 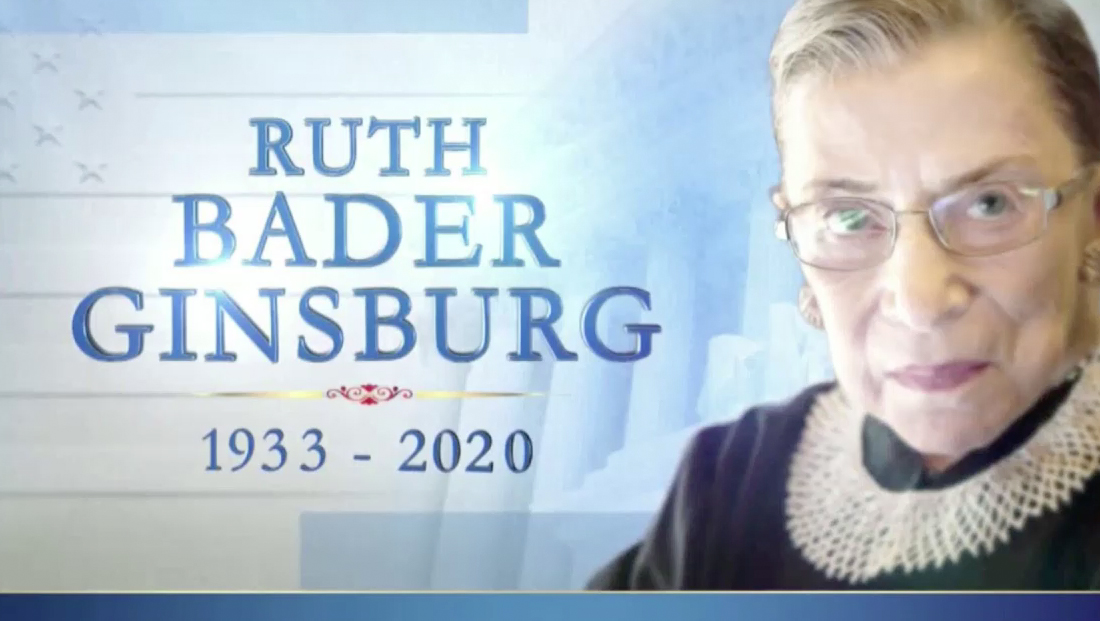 The death of Supreme Court Justice Ruth Bader Ginsburg on Friday, Sept. 18, 2020, appears to have caught TV news at varying degrees of preparedness with one’s coverage complicated by the oddities of how time zones and sports coverage affect program schedules.

On the east coast, U.S. Open coverage on NBC pre-empted “NBC Nightly News” and local news in many markets, while many central time zone stations took what was likely a tape delayed broadcast at 6:30 p.m. local time after a half hour of local news.

Despite golf covering its timeslot in some easterly markets, NBC still produced its signature newscast so it would be available for markets farther west who record the feed and broadcast it later, typically at 6:30 p.m. local time (5:30 p.m. in most central time zone cities).

Sports, in general, are typically aired live across the country so coverage would have wrapped at 4 p.m. local time in Los Angeles, for example, letting Pacific stations air almost their full slate of afternoon and evening programming as planned.

NBC took network air at about 7:22 p.m. eastern time for a special report on the death of Ginsburg that was carried live by nearly all of its affiliates.

This resulted, in many central time zone markets, having anchor Lester Holt “interrupt himself” for the network special report in the middle of a taped package.

In at least the Chicago market, there was a glitch at about 6:14 p.m. local time, with the NBC News special report live bug appearing on a black screen briefly before bars and slate appeared identifying the feed as “Control Room 71 NBC 30 Rock NYC.”

In the background the words “Chuck Todd here … 1, 2, 3″ could be heard, presumably uttered by the network’s political director and “Meet the Press” moderator doing a soundcheck.

Sources say the glitch was due to NBC preparing to go on the air with a special report and inadvertently cutting into “Nightly” in some markets.

Control Room 71 is one of the “hot” control rooms NBC can use in the event of breaking news that requires interrupting normal programming.

Meanwhile, CBS and ABC aired newscasts in their normal time in most markets and broke in at about 7:19 and 7:20 p.m., respectively with special reports.

CBS had “CBS Evening News” anchor Norah O’Donnell on hand to anchor, while ABC had Byron Pitts anchor. Chief anchor George Stephanopoulos, who would typically be the first choice to anchor a special report, joined later via phone.

Over on NBC, Lester Holt anchored the special report.

MSNBC was about to start a segment of “The ReidOut” on recordings of depositions in related to legal issues surrounding Trump University when it had to shift gears around 7:34 p.m. eastern to cover the breaking news with anchor Joy Reid leading.

CNN returned from a break around 7:30 p.m. eastern in the middle of “Erin Burnett OutFront” and aired its breaking news stinger before Burnett announced the news.

The network had Dr. Sanjay Gupta, the network’s medical correspondent, on camera discussing the medical angle of Ginsburg’s death. Gupta had been slated, according to the tease before the break, to appear on “OutFront” discussing a possible coronavirus vaccine at the time the bulletin came across.

Fox’s conservative commentary channel was airing a live Donald Trump rally (it’s typically the only cable network to regularly cover these events in full live) when its “Alert” stinger interrupted Trump’s speech and the network cut to host Martha MacCallum, whose show, “The Story” would have normally been on the air, to provide coverage.

'NewsNation' live shot from SCOTUS gets F-bombed (and then some)… pic.twitter.com/iDtWXaLweB

Newcomer “NewsNation” on WGN America went on air at its normal time about 30 minutes after news of Ginsburg’s death was confirmed (8 p.m. eastern) and opted to use a cold breaking news open but its coverage began to fall apart a bit when it lost a phoner to separate times (with the same person) and a passerby F-bombed a live shot outside SCOTUS.

'NewsNation' live shot from SCOTUS gets F-bombed (and then some)… pic.twitter.com/iDtWXaLweB

On Saturday, Sept. 19, 2020, the weekend edition of network morning shows picked up coverage of Ginsburg’s death.

Only NBC’s “Today,” anchored from Washington, D.C., devoted its entire teases and headlines to Ginsburg — also opting for a somber musical cue and the look the network often uses for coverage of prominent deaths.

“Good Morning America” on ABC and “CBS This Morning Saturday” did lead with the Ginsburg news and featured it prominent in their teases, but also mixed in other stories of the day.

It’s likely that Ginsburg death and already brewing political battle it will bring will be featured prominently on the Sunday morning public affairs shows as well.

Most networks also have prepared reports and biographical packages ready to go for prominent celebs and other public figures — especially those who are very old or in ailing health, so it’s likely that much fo the content shown Friday and Saturday had been pulled from these sources.