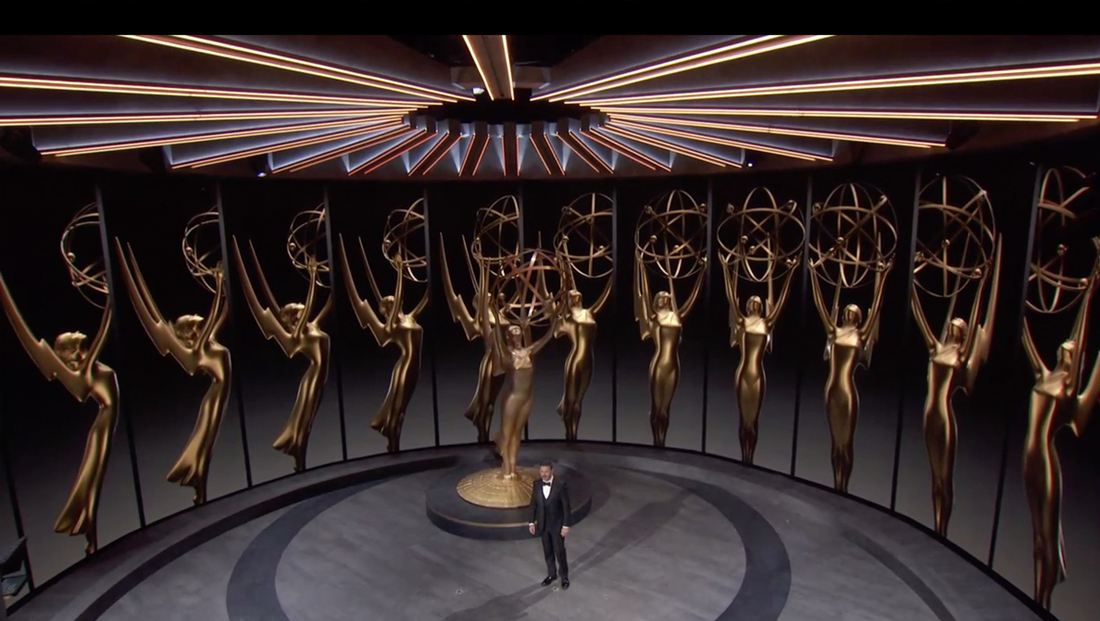 The 72nd Emmy Awards will likely go done as one of the most unique shows of all: Forget experimenting with no hosts, multiple hosts and other gimmicks — this year’s ceremonies were changed due to necessity thanks to (all at once now) the coronavirus pandemic.

With the idea of bringing together thousands of celebrities, crew members and other support stuff in an enclosed auditorium hardly ideal, ABC and the academy reimagined the entire approach with production designer Florian Wieder.

Instead of using its typical home of the Microsoft Theater, ABC moved to the Staples Center, the massive L.A. arena that’s home to the NBA teams the Lakers and Clippers (at least for now), NHL team the Kings, plus the city’s WNBA franchise the Sparks as well as the Avengers arena football team and numerous concerts and other special events, including the Grammys.

Somewhat ironically, the huge arena had most of its thousands of seats empty (some were filled with cardboard cutouts of celebs and a real Jason Bateman as a part of an opening gag) and built a draped off enclosed set in the middle of what appears to be the ice hockey configuration (hopefully sans the ice). 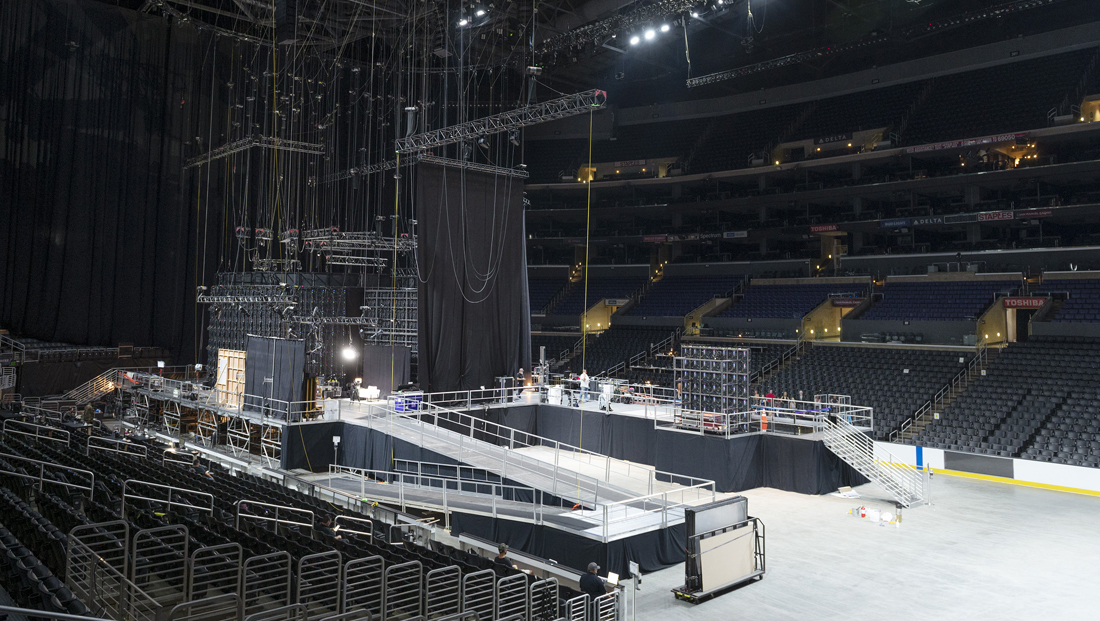 The set for the 2020 Emmys under construction in the Staples Center. Photo courtesy ABC.

The show started with Kimmel coming out on stage and, thanks to a visual effect, making it appears like he was in front if a real audience in the Microsoft Theater, with audience reaction clips of laughter edited it in response to his jokes.

However, the trick was quickly revealed and showed that he was facing empty seats and standing in front of a relatively small video wall. 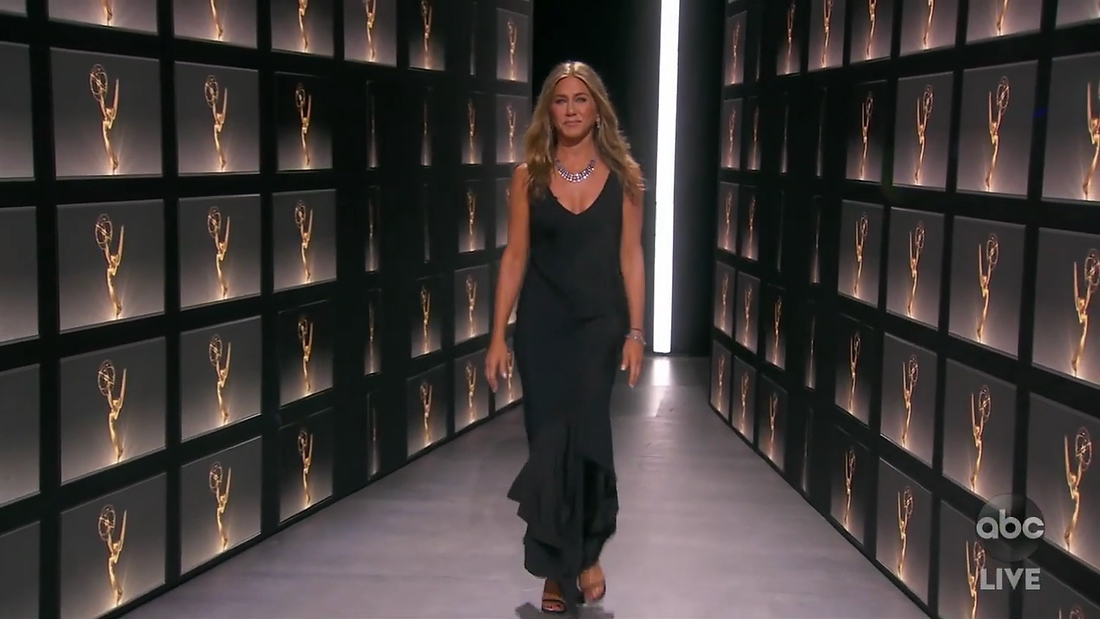 The area also featured an oversized Emmy statuette sculpture as well as large theatrical style lighting pointing inward and was topped with dramatic “beams” radiating outward to form a sort of “crown” above the space.

The circular studio was equipped with multiple robotic cameras that could move around the space on tracks hidden around the edges of the circular floor. At times, a handheld camera operator and assistant were also in the space to capture additional views. 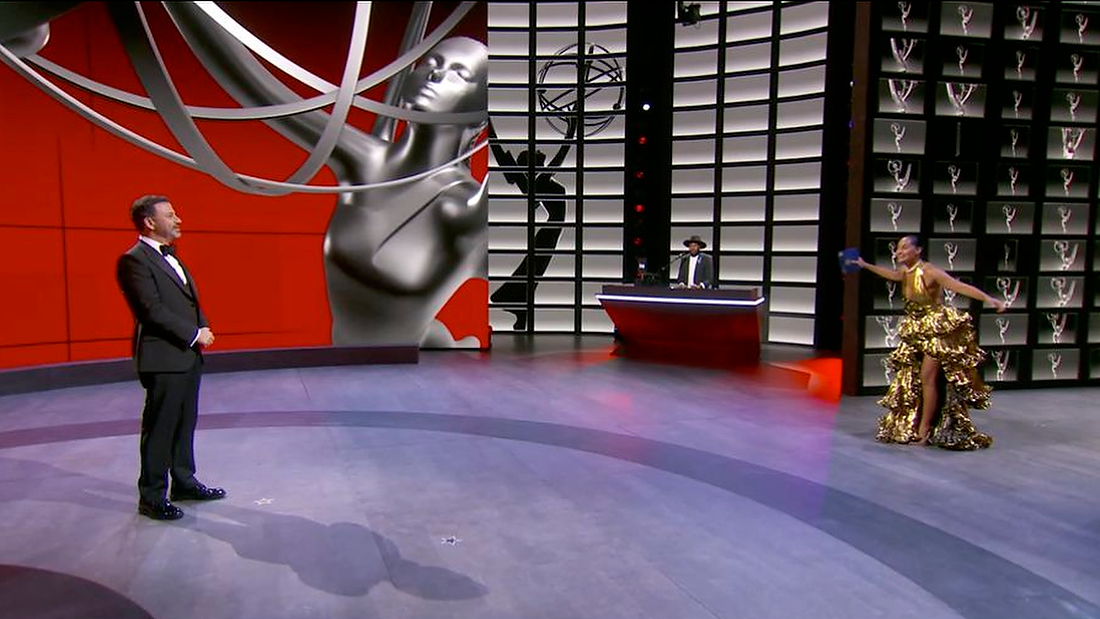 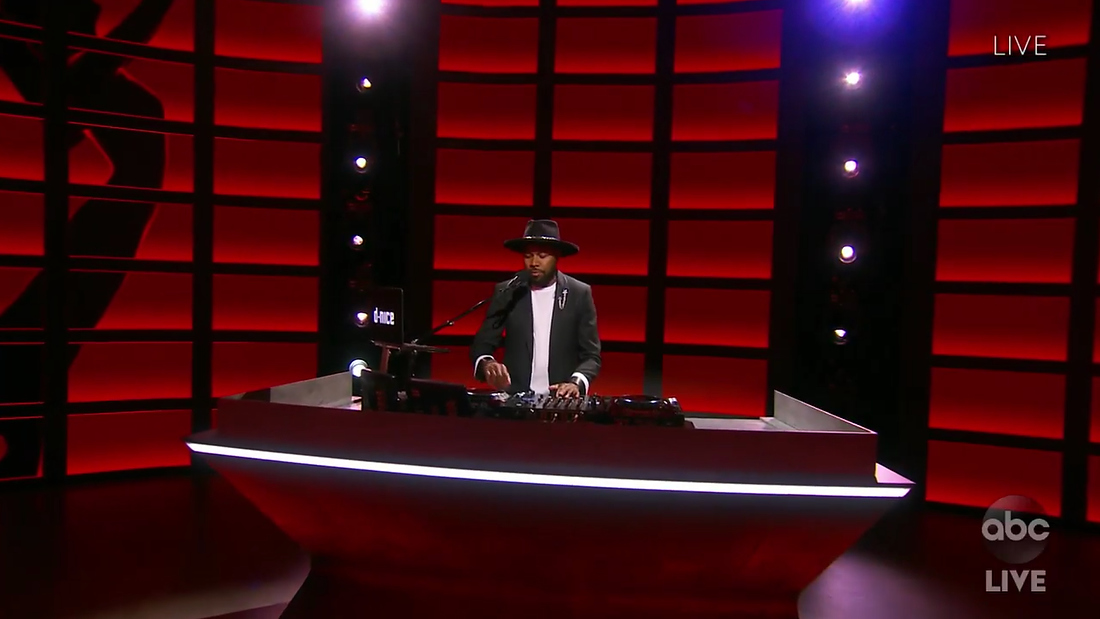 The Emmys also forgoed its traditional orchestra in favor of a DJ with a special DJ booth in the 360-space.

While the script font looks that ABC used in its key art released earlier this year was used on the enveloped opened to reveal winners, the show graphics themselves used the familiar all calls, generously spaced and elegant rendition of the word “Emmys” in its titles, jumps and rejoins. 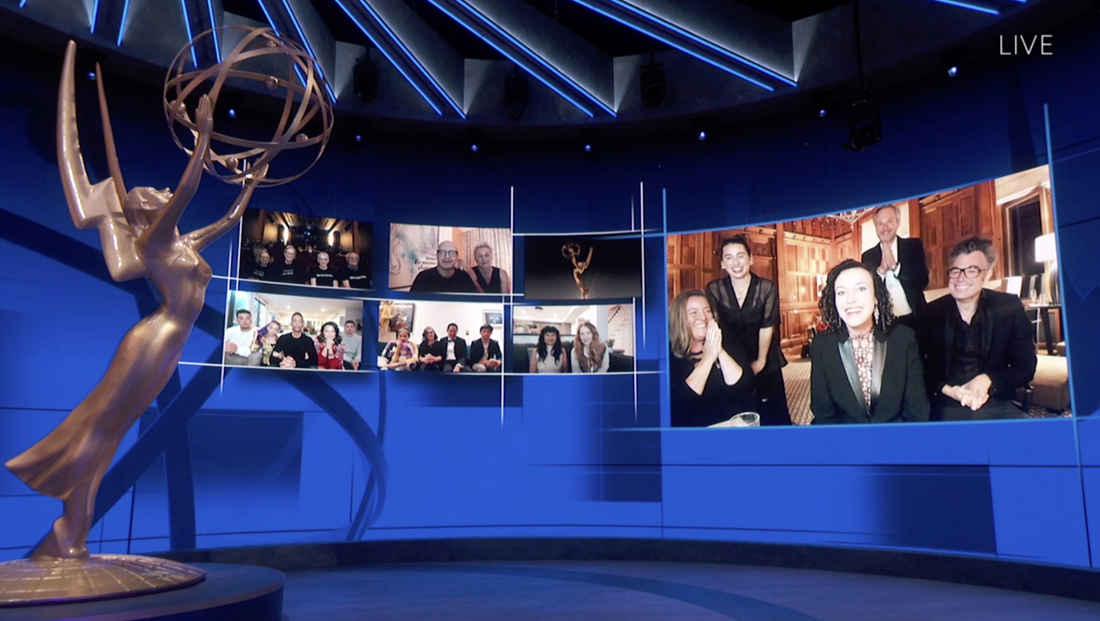 A common theme of the video wall graphics was a series of wide and narrow gradients that intersected with each other to showcase imagery of the statuette, nominees and a “virtual audience” wraparound graphic of the 100 feeds ABC had coming in from around the world. 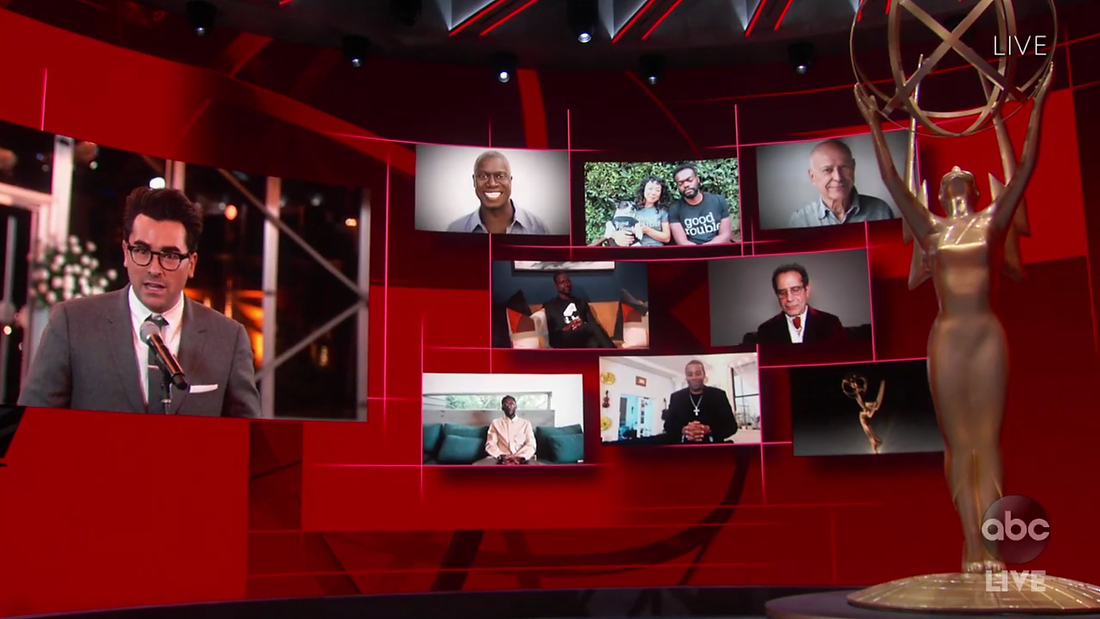 The production also smartly used rectangles — some with an image of the statuette and some without — on the video panels, but left a generous amount of black space between each element. 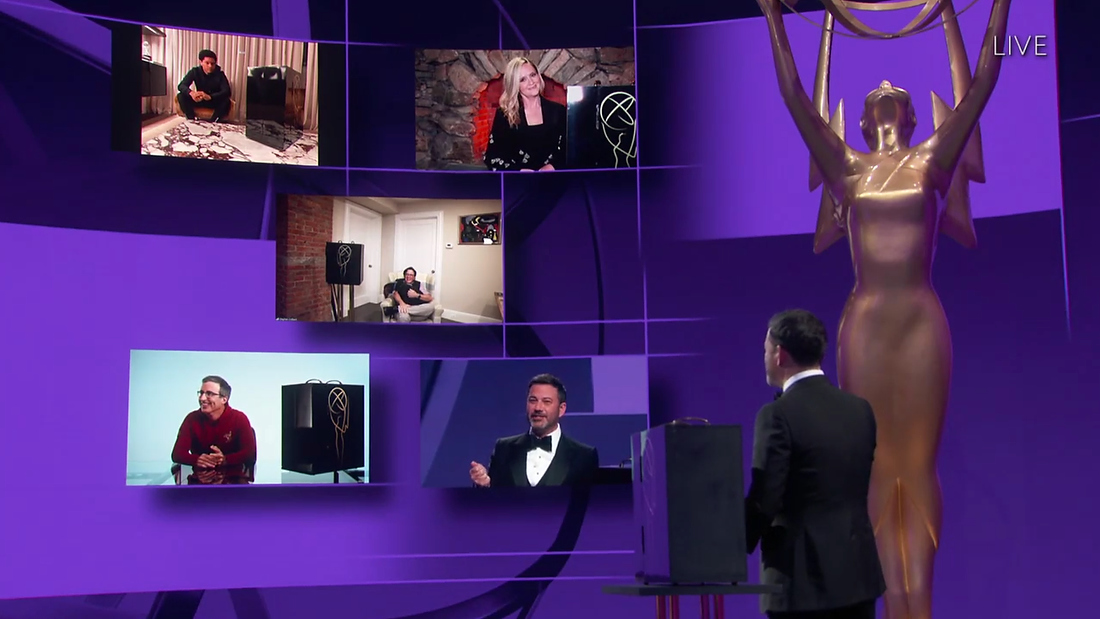 These shapes could “flip” around. creating the effect of “floating” panels or “cubbies” that had the physics-defying ability to move. Thanks to careful lighting from Al Gurdon at Incandescent Design, there was almost no light washes on the panels, which, had beams of light reflected off the LED panels, ruined the effect.

This look was also frequently used in the wedge-shaped tunnel area to make it look like the person entering or exiting the space was walking down a hall of Emmys (though, again, with the supernatural ability to rotate in midair).

Insert graphics, which are typically used to label nominees and winners, features a simple gradient-based design with similar typography as the broadcast graphics package logo.