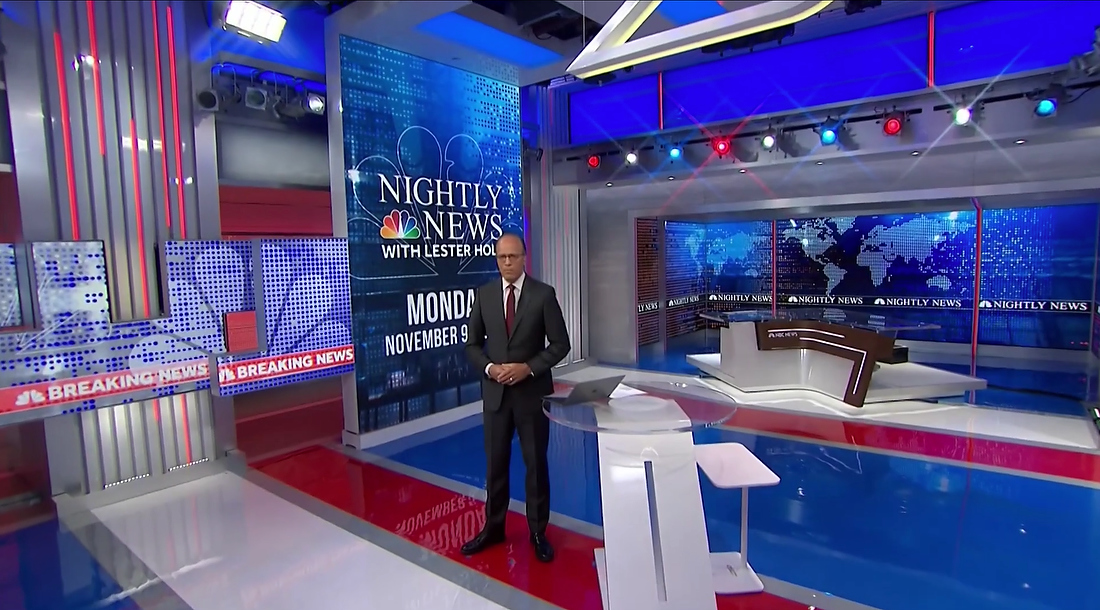 In addition, these shooting techniques allowed the broadcast to showcase multiple video walls in a single shot — including many instances where some topical graphics would appear as a sort of “secondary” element on one with the primary one and a headline on another. 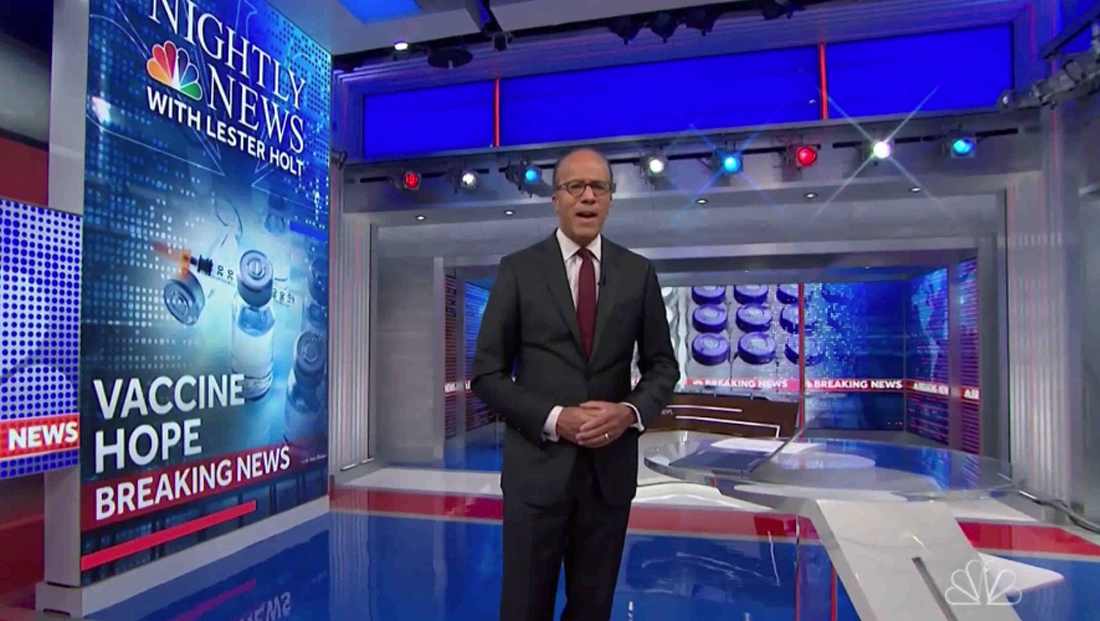 The top of the show used the “tower” as the primary background and featured the show’s logo above set against an outline of the NBC peacock along with imagery of vaccines with large typography reading “Vaccine Hope” and a red “breaking news” flag near the bottom (a ribbon with the same label ran across all of the other visible LED panels in this shot).

Red was also used in a decorative bar under the text, which is reminiscent of both the network’s Decision 2020 and “Today” graphics packages.

Although the broadcast began with an extremely wide view of this part of the studio, the shot quickly moved in and swung to one side to frame Holt appearing next to it. 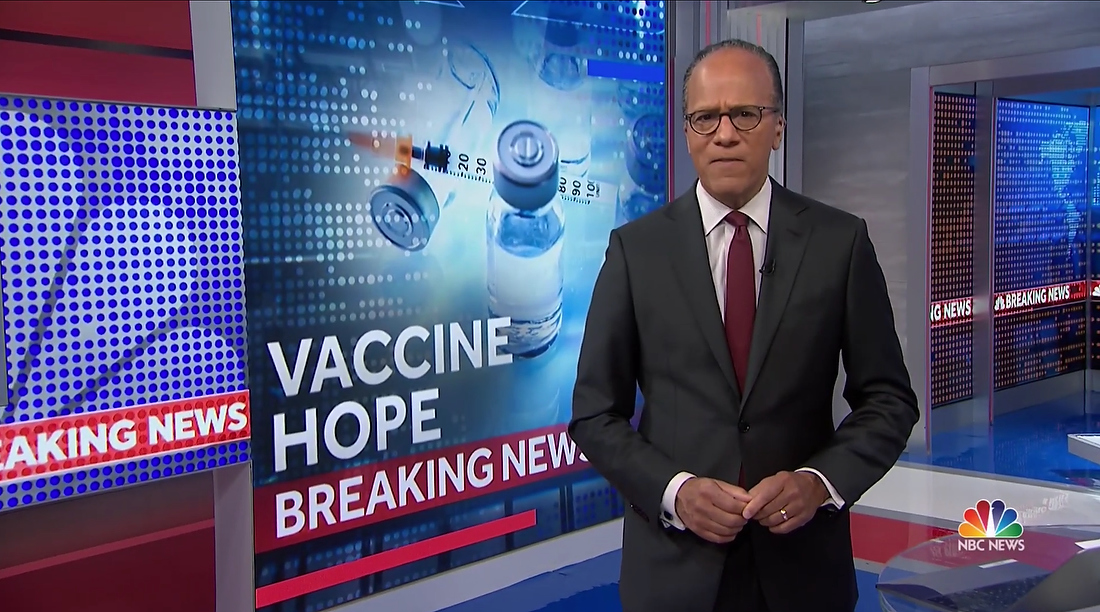 After a dramatic push in, the top story shot was framed like this.

The video wall graphics themselves, meanwhile, introduced a new “dot matrix” motif that was used as a textural pattern behind other elements, a sort of “transitional” element between topical imagery and completely computer-generated backgrounds as well as to form the outline of world maps. This dot grid also appears in a portion of NBC’s Studio 4E.

Most of the on-set graphics retained the sans serif font Efra that had been used in OTSs, video wall graphics and lower third banners previously (the insert graphics were not updated and continued to use the rich blue-violet background with light bursts and Efra headlines and identifiers).

Also missing from the Nov. 9 broadcast, however, was the angled OTS style graphics the network started using in the spring of 2019, or the more traditional overlaid OTS style that NBC has been using when Holt is not in the normal studio space.

Also not updated were the lower third style banners used during the show’s headline teases as well as previews of what’s coming up.

The new on-set graphics also went with a blend of blues ranging from a bold primary shade to teals. Breaking news designators added red to the color palette while white was a background color used less frequently — mainly in the “jigsaw” LED panels to the left of the video tower. 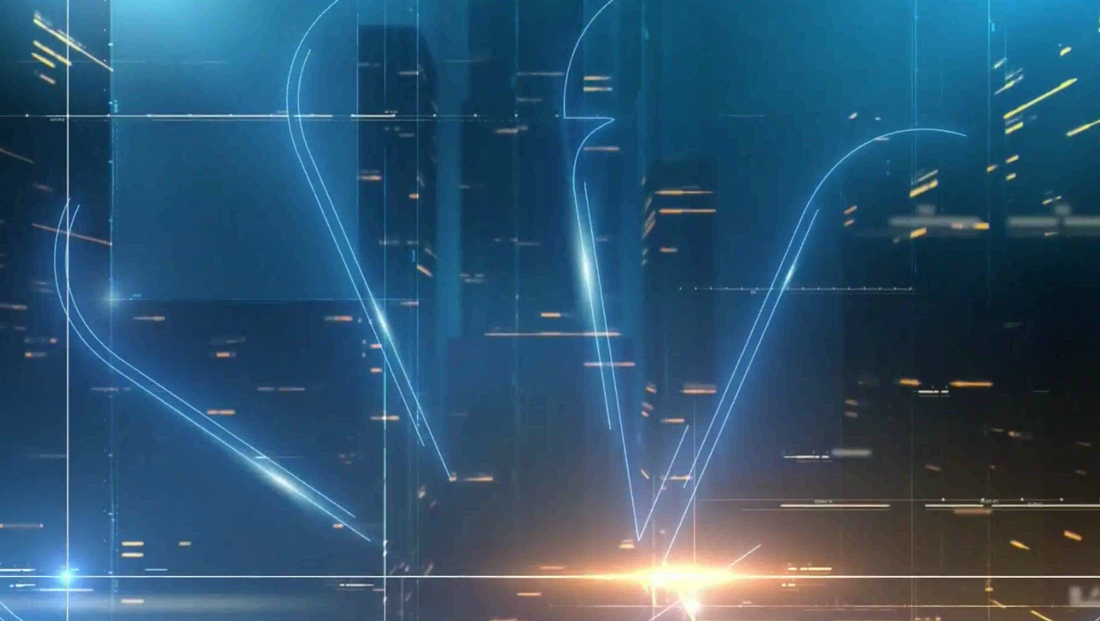 This frame, which appears as a fullscreen wipe between elements in the ‘NBC Nightly News’ tease headlines among other places, showcases the show’s old color palette as well as the 3D drive and horizontal bar and light burst accents that could be read as a series of skyscrapers.

This is a fairly big departure from the more blue, orange and gold palette the show still technically uses. This look also has elements of thin 3D grid lines and micro rectangular elements that would often “slide” around on screen.

Sources tell NewscastStudio that the graphics and set updates, including the removal of the wood finishes, are meant to be permanent but the network is still debating what to do with the red, white and blue floor that was updated for election coverage (the studio was home to various MSNBC programming, including as a home base for Brian Williams). 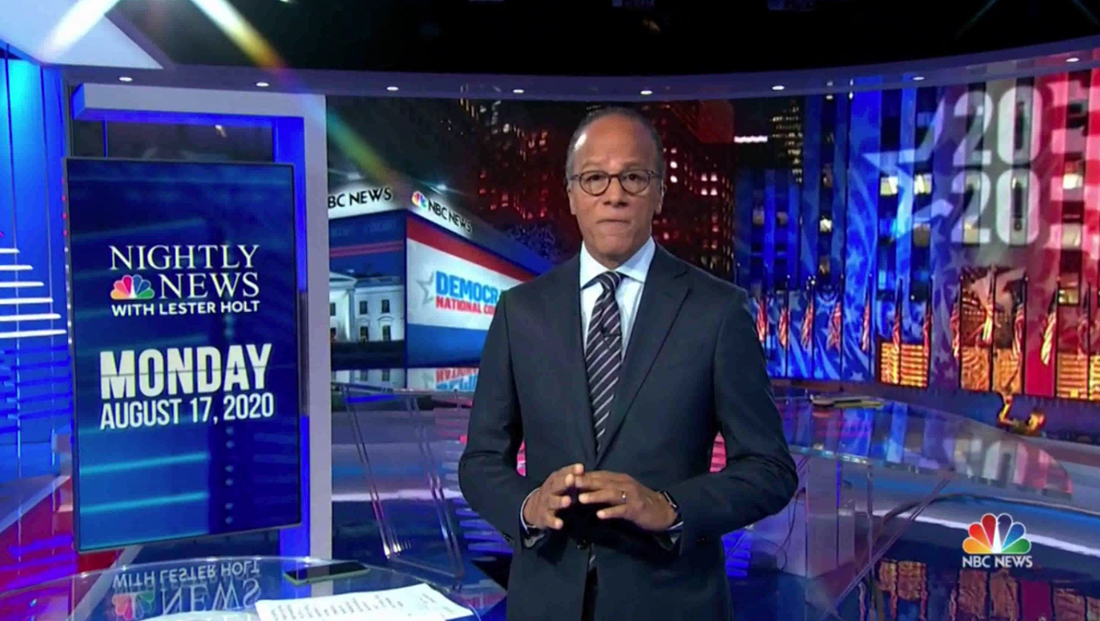 If any of these production techniques look familiar it’s because many of them closely mirror the dynamic shooting and graphical approach that “Nightly” started using earlier in the summer during the Democratic National Convention when Holt would anchor from Studio 1A, normally the home of “Today.”

Those vertical screens were often used to display graphics that were similar in layout to the “overlay” OTS graphics used prior to November from both the home studio NBC built-in Lester’s home and, most often, when he was framed against the small working newsroom area in studio.

That small newsroom area was temporarily removed to provide a “stage” for augmented reality elements during election coverage, while a large vertical LED array was covered the window between spaces, also for the special coverage.