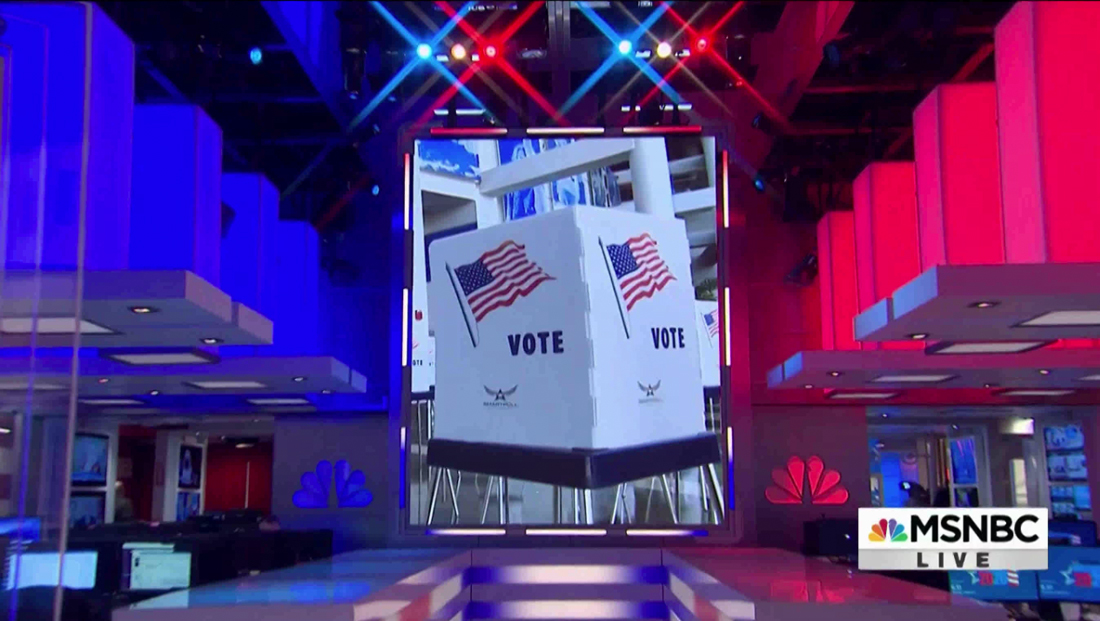 Over the past few weeks, various tweaks have begun popping up in Studio 3A, including the additional of floor decals in the newsroom area.

The network has also installed a large, vertical LED “billboard” — complete with skinny LED strips around the edge to make it look like a real life version of the digital ones found in “Decision 2020” graphics package, in the open space between the internally lit “lanterns” that date back to the original set installed in 2007.

The network has also replaced (or perhaps covered) the two rows of workstations that run down the middle of this same space with an internally lit U-shaped installation. 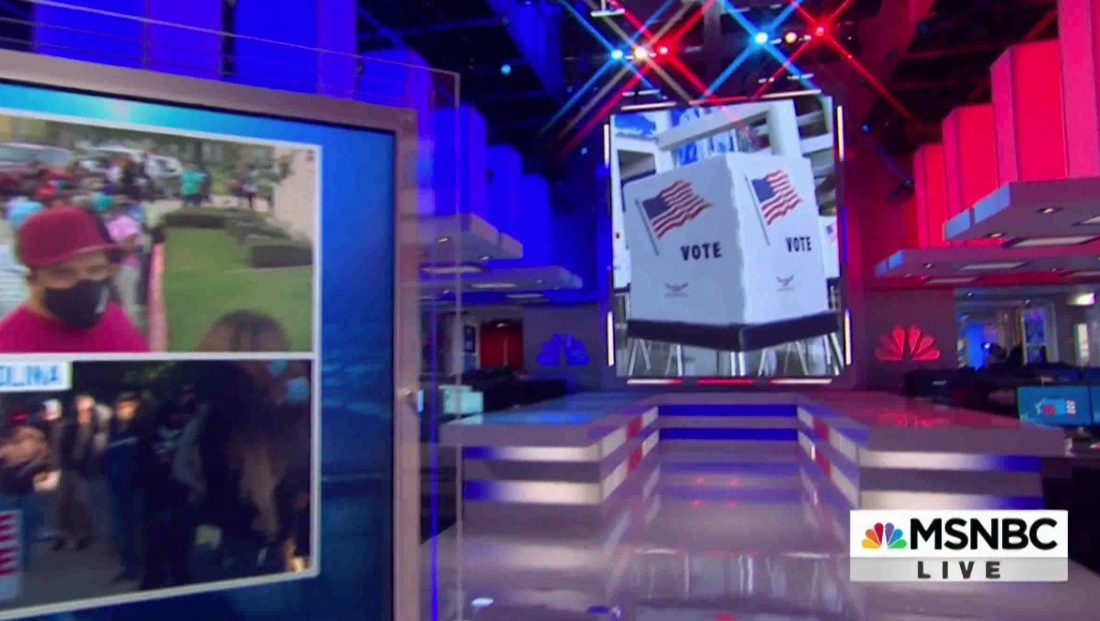 It’s not clear if it will be some kind of desk for analysts or is a way to make the space look less empty given the reduced newsroom staff. Another possibility is a platform for augmented reality elements.

The element itself sits on a large glossy riser but does not appear to have enough space to allow for chairs on the left or right side, so anyone working at the desk would likely need to stand.

Overall, the structure has that “oversized” feel that many anchor desks have taken on during the coronavirus pandemic.

And, while a U-shaped arrangement would require talent to face each other (assuming they sit on the longer sides), there appears to be generously spaced out.

As in the past, the network has continues to use LED video walls to display data visualizations.

MSNBC first updated Studio 3A from its 2007 look in 2016, removing the double height stack of “windows” and silvery gray walls in favor of a large swath of video walls that join at a 90 degree angle in one corner.

Another update in 2018 removed the space’s little used balcony and added a floor to ceiling LED wall with a ribbon that curves out of it.

Earlier this year NBC News proper used the former home of “Megyn Kelly Today” in Studio 6A as its Super Tuesday set, however, that space has since been modified for “The Tonight Show.”

The new, vertical video panel covers up an installation of framed monitors in the header above the window that connects the workspace from the studio normally used for “NBC Nightly News” as well as the window itself.

After “Nightly” moved to Studio 3B in 2011, the old set was demolished and a new set was installed that was home of WNBC’s newscasts.

Those renovations also included filling in the window with a wall (though video panels were added on the 3A side to keep the illusion of a “window”).

The footprint in front of this was also briefly home to a small glassed in studio designed for then ousted “Nightly” anchor Brian Williams to bring breaking news to MSNBC viewers.

WNBC moved down the hall to 3K in 2016, with its old set in 3C used for MSNBC programming, including election coverage, that November.

In 2017, “Nightly” moved back into the 3C space and restored the windows overlooking 3A.

However, that update included adding the option to roll a video wall segment behind the first zone of workstations to “cover up” any activity (or lack of activity) on the opposite side of 3A, though the change was subtle to move viewers become the network would often run a video loop of the space on the video panels.

Likewise, the opposite side of the moving wall features four video panels that appeared on MSNBC air from time to time, though some MSNBC shows have kept the wall out of the way, allowing for the floating square video panels along one wall of the “Nightly” set to appear on air.