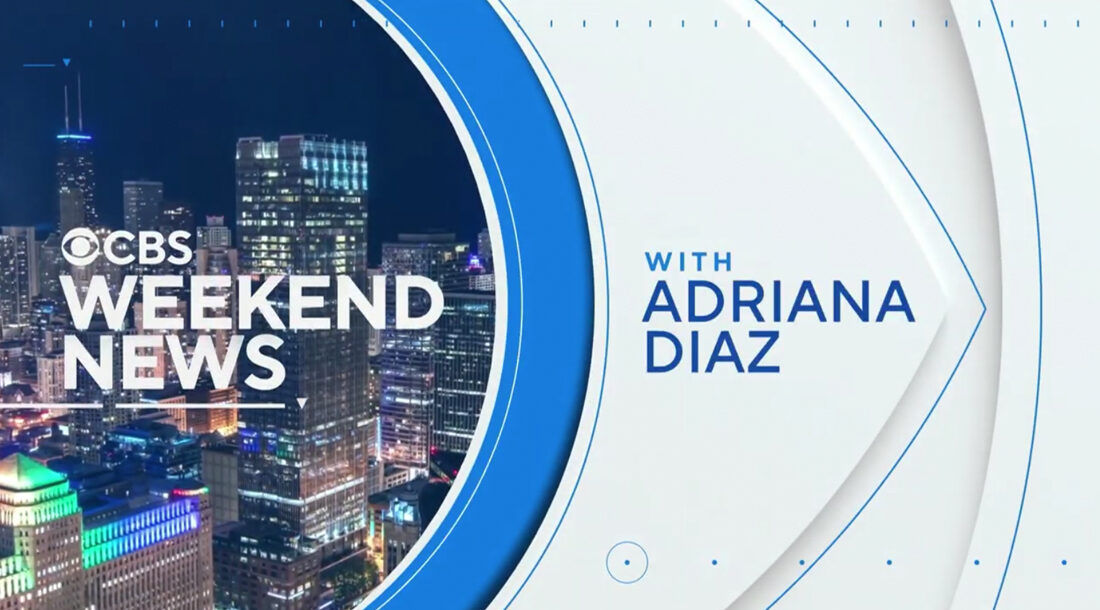 Despite the new open, the show is still using the angular tease headline banner graphics originally designed for when Norah O’Donnell took over the weekday “Evening News” July 15, 2019. “Evening” would get another graphics makeover when the broadcast moved to Washington, D.C. in December of 2019.

Since the coronavirus pandemic started, CBS has been farming out production of “Weekend News” to owned and affiliated stations across the country and using local talent.

Dec. 12, however, marked the first time WBBM in Chicago hosted the newscast since CBS announced permanent anchors and production locations for the weekend editions.

The new open draws heavily on the “deconstructed” eye look CBS rolled out networkwide in October 2019.

The open also includes places to insert local imagery and includes an announce with both the origination location and local anchor’s name, who also gets on screen “with” billing.

The female announcer intros the show by saying “This is the ‘CBS Weekend News’ from Chicago. Here’s Adriana Diaz…” as the regular “Evening News” theme plays.

Sunday editions will presumably get a similar open with updated imagery and anchor name (No “Weekend News” aired in the central time zone Dec. 13, 2020 due to other programming).

The new open also incorporates the white and gray shadowy circular and “football” shaped elements and uses the center of the “eye” as a frame for the localized clip, a look that has also been used for CBS News promos.

In addition to the new open, CBS Chicago also made some cosmetic updates to its newsroom.

It’s possible that this update could be an early stage of an overall redesign for some or all CBS News programs — all designed to fit the network branding better, though CBS has not confirmed any such plans.

CBS has also been rolling out new graphical elements to its owned stations and some network sources report a complete graphics overall is coming.

The “CBS Overnight News,” meanwhile, which was created at the same time “Weekend News” debuted in 2016, has kept its open, which was redesigned previously to match the “Evening News” graphics.

“Overnight News” typically features a portion of recycled content taken directly for the “Evening News” feed of the previous evening, even including anchor intros — meaning it makes sense for the shows to share looks. Typically the network tapes a modified open and also blends in original content with a separate anchor.

“CBS Morning News,” which airs in many markets right before early morning news, retained its look borrowed for “CBS This Morning.”

Editor’s note: A previous version of this story did not clarify that WBBM would be the permanent production location for “CBS Weekend News” Saturday editions. The story has been updated to reflect that.