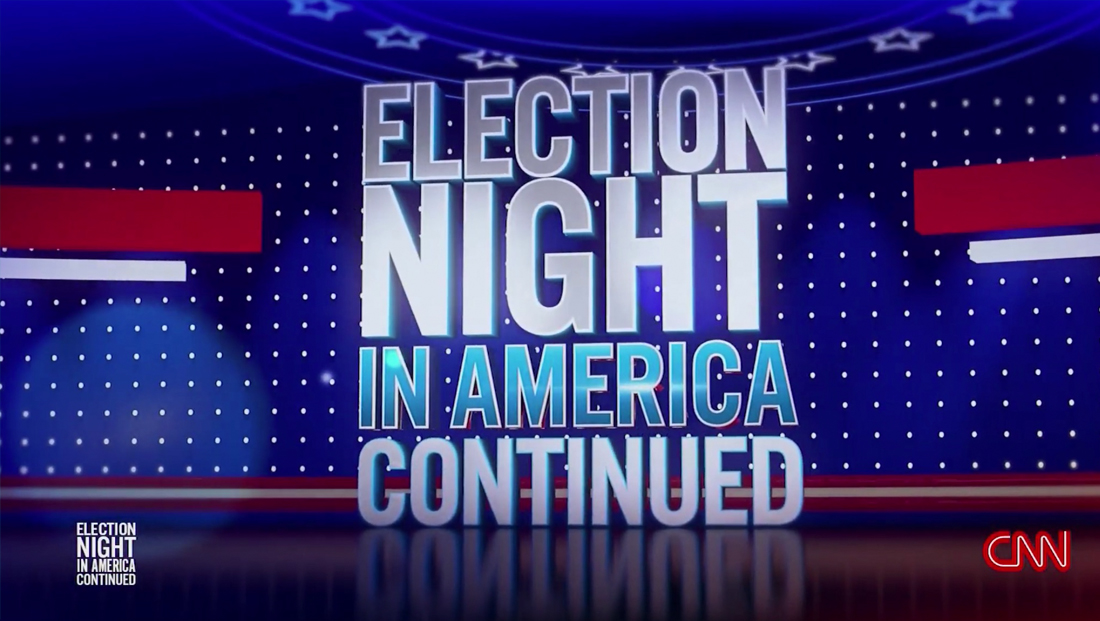 CNN, MSNBC and Fox all offered extended coverage of the Jan. 5, 2021, Georgia senate runoffs that extended into the early morning hours of Jan. 6, 2021.

For its part, CNN lived up to its “Election Night Continued” branding by serving up an epic extended open that continued on and on at 4 p.m. eastern Jan. 5.

In many ways, it actually felt like three opens, in stark contrast to the comparatively short open for most of its 2020 election coverage, including in the “actual” election day open shown here.

The network started with a dramatic summary of the stakes of the runoff after anchors Wolf Blitzer and Jake Tapper briefly appeared on camera.

After about 90 seconds, the announcer proclaimed “This is CNN’s coverage of ‘Election Night in America: Continued,'” as that branding appeared on screen.

That seemed like a natural end of the open — but wait, there was more — another 30 second segment that emphasized key points using large, 3D “WordArt” added to B-roll imagery.

Both of these portions used angular accents borrowed from the network’s main election package, but the overall look was darker than the lighter look used in other opens.

The network then cut away from that to run a Georgia-ized version of the “Election Day in America” open.

Over on MSNBC, coverage officially kicked off at 6:30 p.m. eastern with a toned down version of the extended opening segments used for other 2020 political coverage that involved multiple choreographed camera moves zipping from video walls and panels to other parts of Studio 3A.

Like during previous election coverage, Brian Williams was in the “NBC Nightly News” studio and Rachel Maddow was at at the other end of the space in front of the corner video wall installation.

What was different is that Joy Reid and Nicolle Wallace, who appeared during most other key political coverage on the network in 2020, were in separate studios from Maddow. Previously they had been seated — socially distanced — on either side of Maddow.

Of course, the network revived its famous election theme music, for the occasion.

Fox, meanwhile, broadcast from outside the Georgia World Congress Center in Atlanta where it installed a large “Battle for the Senate” banner on the side of a portion of the complex.

The network ran an extended open with a U.S. map as a backdrop and a slightly flatter look than the normal “Democracy 2020” open.

After that initial segment the network used a brief Georgia runoff themed version of its “Democracy 2020” open that transitioned to an augmented reality shot of the exterior of Fox headquarters in New York before switching to its makeshift studio in Atlanta.

The network also used Studio F back in New York with AR elements showcasing the Senate balance of power, live shots and other visuals.