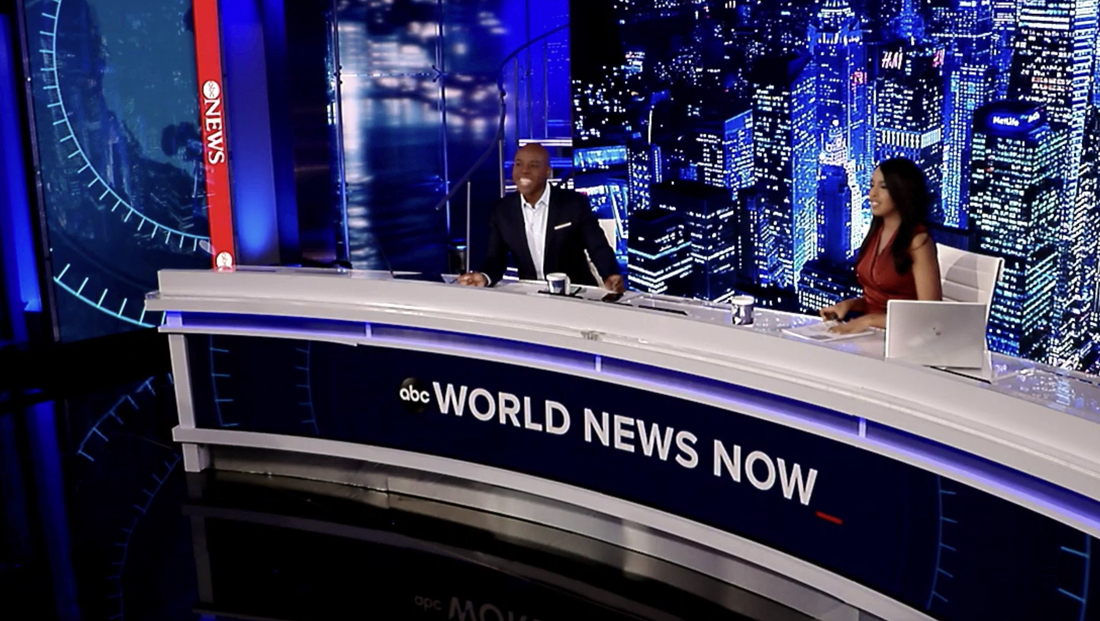 ABC News‘ overnight and early morning newscasts have made the transition over to the main part of the network’s primary studio.

Both “World News Now” and “America This Morning” moved to the primary space at the heart of Studio TV3 inside the network’s New York City studios Feb. 15, 2021.

These shows had been originating mostly from Studio TV3B, a small, semi-enclosed area that was also the temporary home of “ABC World News Tonight” during much of the construction to redo TV3 and prior to it moving to the main part in September 2020.

During construction, “WNN” and “ATM” also used a secondary set in the same complex that was designed for ABC News Live programming but has also been used for network special reports and other purposes.

Both shows are now produced from in front of the large, “hinged” video wall that’s been the primary background for the network’s political coverage, among other productions.

The practical spiral staircase is visible on the far left and also appears behind the camera left anchor one shot, while the camera right one shot is mostly just the video wall (at least in the socially distanced blocked setup).

During “WNN,” the background is a dramatic view of a darken city with a blue tint. Co-anchor Mona Kosar Abdi (perhaps jokingly) noted that she could even “see” her apartment in the video on Feb. 15’s edition, though she quickly released that pointing it out might not be the best move.

She also expressed relief that she no longer no longer feels like her footwear is under scrutiny like “The Wendy Williams Show” show cam.

Since social distancing guidelines started, the show has mostly placed one anchor behind the desk and one  in front of it in a debrief-style setup. This meant her entire lower half, including shoes, appeared on air in the off axis two shot, a la Fox.

Adbi and co-anchor Kenneth Moton also showed off the set briefly, including what appeared to be a fixed overhead camera showcasing the dark video ban graphic on the front of the desk with the show name.

These shots also showed the edge lit staircase treads were let in blue and white and at least one of the side LED columns featured “WNN” branded graphics.

For an anchor desk, the show uses one of the large curved LED fronted desks ABC first used for Super Tuesday coverage, which has the advantage of being able to space out anchors more naturally.

Previously, the two shows had used the L-shaped desk that “World News Tonight” also uses, with two anchors along on arm of the L — which worked better in a non-coronavirus era. 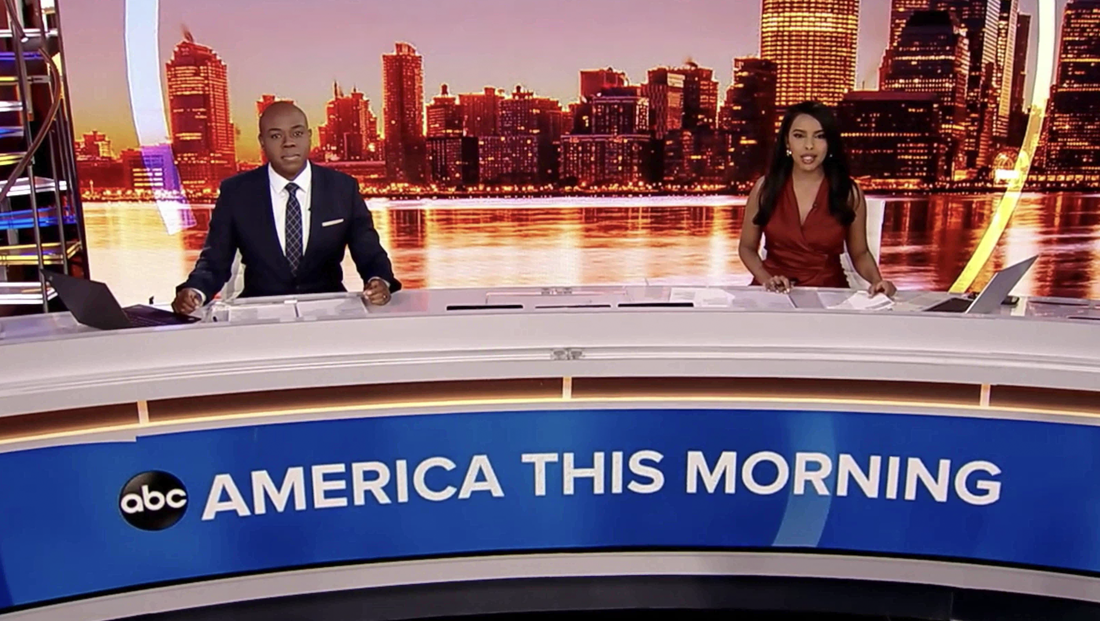 Meanwhile, the early morning “America This Morning” also used the same new setup — but with an updated shoreline view of New York City in a harder, orange-gold hue and ring segments borrowed from its graphics package which itself is inspired by the “Good Morning America” look.

For “ATM,” the staircase gets white, blue and yellow accents, which also happen to be the main colors in the “ATM” and “GMA” look.

ABC overnight and early morning broadcasts have shared studios with “World News Tonight” for years, often positioning its anchors along one side of the previously mentioned desk and using the small workspace that sits camera left of the “WNT” main camera position as its background prior to the studio remodel.

The small newsroom often appeared on wide views of “Tonight” when a correspondent joined the anchor desk for a debrief.

“World News Now,” which starts live at 2 a.m. eastern on weekdays and continues on a loop for stations across the country, notably stopped airing on network owned stations in major markets in the summer of 2020, but is still seen other affiliates and ABC News Live, the network’s streaming news service.

Meanwhile, most stations continue to carry “America This Morning” right before local news, with the show fed live at 3:30 a.m. eastern and repeated for stations in other time zones.

Many ABC owned and affiliated stations carry the show for 30 minutes immediately before local news starts at 4:30 a.m. local time.