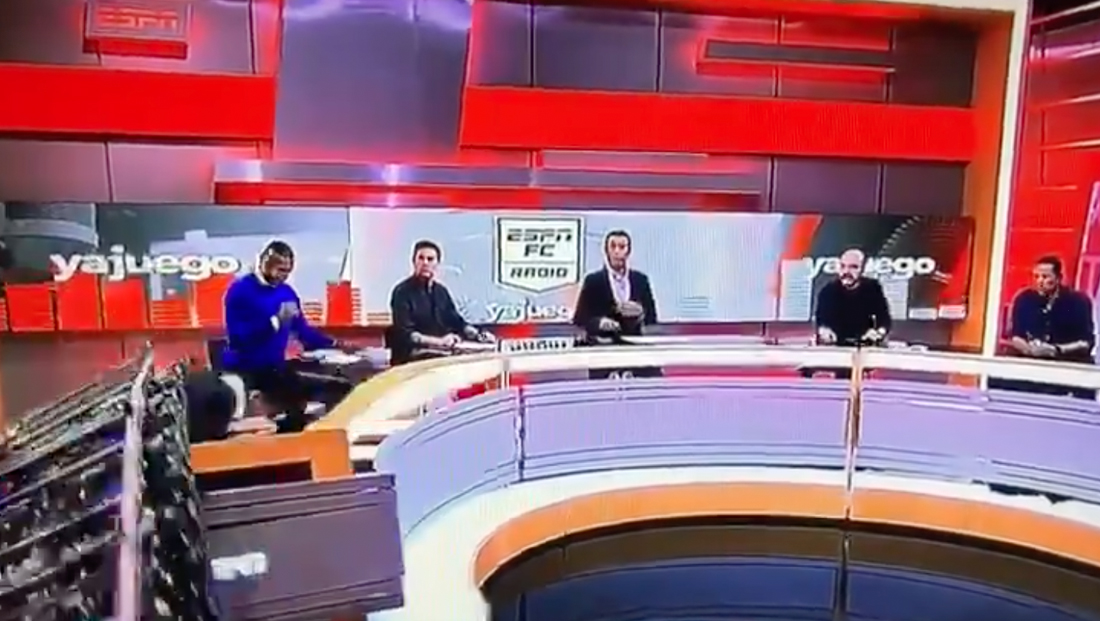 A large segment of LED panels fell during a live broadcast on ESPN Colombia — landing on one of the commentators.

Q&A: The importance of display tech installation planning and safety

The scary incident happened during coverage of the Champions League while host Francisco Javier Vélez was talking while a wide view of the horseshoe shaped desk was shown with six people visible on screen.

While Vélez continued, a large section of video wall (not the “entire wall” as some outlets have reported) could be seen crashing off the camera left wall onto the person sitting on the far left of the desk, Carlos Orduz.

Closer examination of the clip shows Orduz, who appeared to be looking down at the desk at the time, shoved forward and practically flattened against the top of the desk, which seems to at least partially buckle under the pressure.

It also appears that at least some of the desk’s body, mostly on the left side, was shoved forward from the force of the falling LED.

There was an accompanying loud sound as the view cut to Vélez, who was noticeably shaken by what he just witnessed.

Thankfully (but somewhat surprisingly given just how bad the incident looked), Orduz was not seriously injured by the collapse, he tweeted later.

“To those who wrote to me and greeted me about the accident last night, I must tell you that I am fine,” he tweeted in Spanish.

He goes on to report he was examined by a medical professional and only suffered bruising and a blow to the nose (with “no fracture”).

He thanked viewers for their concern and well wishes.

Based on a clip from earlier in the same broadcast, it appears the video wall that fell is one that’s used mostly for standups.

Vélez himself had been standing in front of the wall shortly before the incident before walking back to the anchor desk on camera.

Only a small part of the video wall is actually directly behind that far left desk position — and it appears that only a few feet of the LED came direct contact with the desk and Orduz when it fell forward.

Had the entire video wall been installed farther back toward the rear wall of the studio set the injuries could have been much more severe — and hurt more than one person.

Likewise, a collapse during Vélez’s earlier standup could have also been much more catastrophic.

Video walls have become almost ubiquitous on the sets of TV productions of all types ranging from networks to small TV stations.

They are typically filled with animated graphics or other imagery — with the advantage of being able to be changed with just a few clicks on software or a switcher, depending on the studio’s configuration.

In many installations, multiple video panels, including seamless ones often no bigger than a medium sized framed picture, are placed side by side to form a wide swath of LED canvas — which can be as small as a large household TV screen or multiple stories tall and 50-plus feet wide.

LED arrays can be quite heavy, so most set designs call for heavy duty support structures, often metal, to hold the panels on place.

This helps ensure the structural integrity of the video wall but also keeps panels from moving, even slightly, which can cause the smooth imagery to become oddly distorted.

ESPN Colombia’s set features a solid wall fronted with glass panels with horizontal banding — and it appears the video panels are placed in front of these elements.

This type of design isn’t uncommon and often requires some creative engineering to ensure there’s enough support to hold up the LED panels while still creating the “illusion” that the video unit is “floating.”

Of course, no construction is immune from failure or collapse for any number of reasons.

However, a look like ESPN Colombia’s, by design, often doesn’t have as many points where the support structure can be secured into a solid mounting surface.

Many other LED video walls have most or all panels mounted directly to a wall or allow at least part of their weight to be distributed to the floor of the studio.