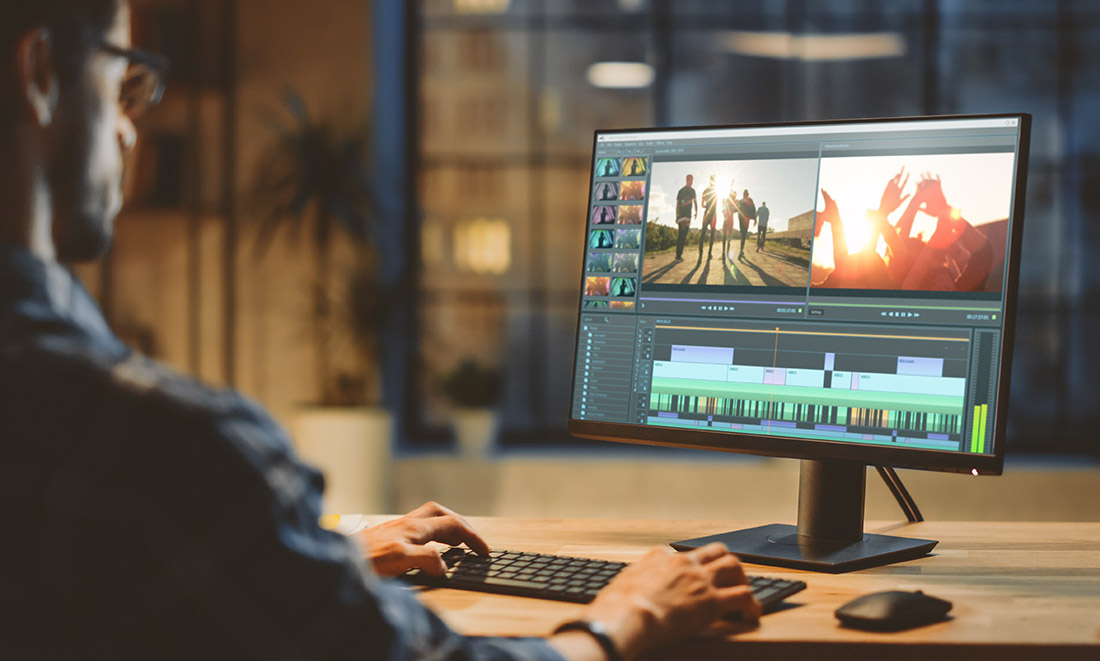 The threat to traditional broadcasting comes from clever kids making increasingly popular shows at a fraction of the traditional cost. Even if traditional content looks better, costs are stupendously higher and are often less ‘personal’ to people. The cost of creating content has plummeted, resulting in more interesting content being made. The drop in cost and the complexity of making shows combined with internet distribution puts the traditional business model very much at risk. Broadcasters must resolve this challenge at a time when traditional advertising revenue is clearly declining.

The solution is software. Equipment makers have traditionally relied on a model built on broadcasters buying gear in the same way farmers buy tractors. You buy it, you own it. While software may have the same development cost as hardware, it can be offered more affordably to customers in a lot of different and innovative ways. In an industry that is changing very quickly, customers can try new ways of making shows, try new concepts, and new business models to get more channels online. It’s extremely flexible and affordable by comparison. What is crazy is that it took us so long.

Software is changing the world of broadcast because it is built on top of the economics of commoditization in technology coming from other sectors. Computer games drive down the cost of GPUs and drive up the performance for processing video. CPUs and memory are very affordable and deliver incredible performance. Adapting these commodities is causing broadcast workflows to change dramatically. The internet makes distribution affordable. Mobile devices that shoot great video use the same sensors used in higher-end cameras. The 4K selfie trend has lowered the cost and increased the availability of high-quality equipment, even outside of the tools used by broadcasters.

The cost of storage, computer power, and LED lighting have also all come down because these technologies have become commoditized in other markets. This all benefits broadcasters greatly. Software is now the icing on the cake of commoditization. Smart companies ride the wave of commoditization instead of ignoring it. They are the ones that disrupt the industry they work in. We have seen this time and again whether in online sales, phones, delivery and much more.

Ultimately, we are in the process of making shows, which means we will always need cameras and monitors, but even those have been commoditized by the broader consumer markets. Software sits in the middle. You no longer need to be in one place tied to some big piece of equipment.

For the last 50 years, live sports producers have believed they gained something by showing up on site and they are entirely correct, the big shows like the Super Bowl will always be better on site; there is a feel that exists in the stadium that you need to make an amazing show.

But for most other events it is becoming clear that a remote setup using broadcast talent in their own home or local office has the potential for ten games to be produced for less money and less time than it took previously for a single game. That is nine more games now taken to air that would never have made it before. This means more people are watching their teams more frequently, and the feeds can be made more personal to them.

This drives engagement and is ultimately how we make a difference. It might be on channel two, three, or four for a particular network, but they are still there where they weren’t before. Imagine getting a 10x salary increase and how that would change your life; remote production just gave you one.

The only way you get to that scale is by allowing the internet to bring camera feeds back and produce it remotely. There are companies and leagues that revolutionized this before COVID. What COVID did was reaffirm that we’re heading in that direction and force us to get serious about changes. For now we probably still need a camera operator on-site – although even that may change with affordable PTZ cameras and AI software with the potential to revolutionize the process even further.

In newsrooms you have people who gather the news and write the stories. That will hopefully remain a vibrant component of newsgathering – and it may be invested in even more – because we need quality stories and information. But something will change significantly. The distance between the written story and taking it to air as a show should be minimized as much as possible.

The industry has looked at automation for years, but there is still room for huge innovation. Software is going to bridge that gap significantly. A journalist should be able to write a story out using word processing software – both for the script and for production automation – and go to air very quickly with very few people while still looking great. This helps make more stories and gets them onto air into more places.

This fails when a journalist writes a story but needs 10 highly paid people in an expensive production room to take it to air. You’ve got a good story, but it costs you thousands an hour to produce it. Bring that down to hundreds of dollars and you’ll see more stories produced that serve more people.

Software reduces the friction between getting a finished story on air. You’re starting to see it now. Software exists that lets you take Microsoft Word documents and turn them straight into a rundown using AI to control the switcher. This makes shows quicker and easier to produce, reduces the number of skilled operators needed and reduces time to air. This significantly reduces cost and increases the amount of content you can create, which is just as important.

We often see linear, live production versus non-linear production as totally distinct things, but really they are not. Non-linear editors were just the way of editing before you could do it in real time. Real time and live are simply the ultimate evolution of non-linear.

Shows need to be edited, but if you shoot and switch live and only need very minor edits, you vastly increase your efficiency. Live TV production tools are as important for non-live TV as they are for live TV. Outside of the news and sports, every game show, every reality show, even first pass on sitcoms should be able to be produced live, and you get incredibly close to what would go to air, because live is so much easier. You might need to tweak a few errors, but the efficiency gains are huge.

A typical live show has a ratio of ten to one. If you shoot one hour, it’s going to take you ten hours to edit it. True live production is one-to-one, where a one-hour show takes one hour. If you can shave that down by a magnitude of 10, you’re talking about huge efficiency gains – potentially producing 10 times as much content or producing content at a tenth of the cost. Both are game-changing for any network. Live production tools are likely to revolutionize broadcast outside of traditional live sports and news.

Now is the time for a true software innovation in the broadcast realm. It is the enabling bridge that keeps content looking and feeling professional while reducing the cost of production. Tools that enable creators to craft content from anywhere – and without restriction based on location – are the next step in the modernization of broadcast.

In fact, they’re not next – they’re now. Now is the time to look at ways you can reduce your capital expenses moving forward, improve creativity and content output, and ensure you remain competitive in the long-term, ever-evolving world of broadcast.

Dr. Andrew Cross is President of Research & Development for the Vizrt Group. He is known for leading the development of NDI and multiple NewTek solutions, including the TriCaster, 3Play, and TalkShow. Andrew has a Ph.D in computer vision from The University of York, and has published more than 20 technical papers in peer-reviewed scientific conferences and journals. When Vizrt acquired NewTek in 2019 Andrew was named as President of R&D for the newly-formed Vizrt Group.