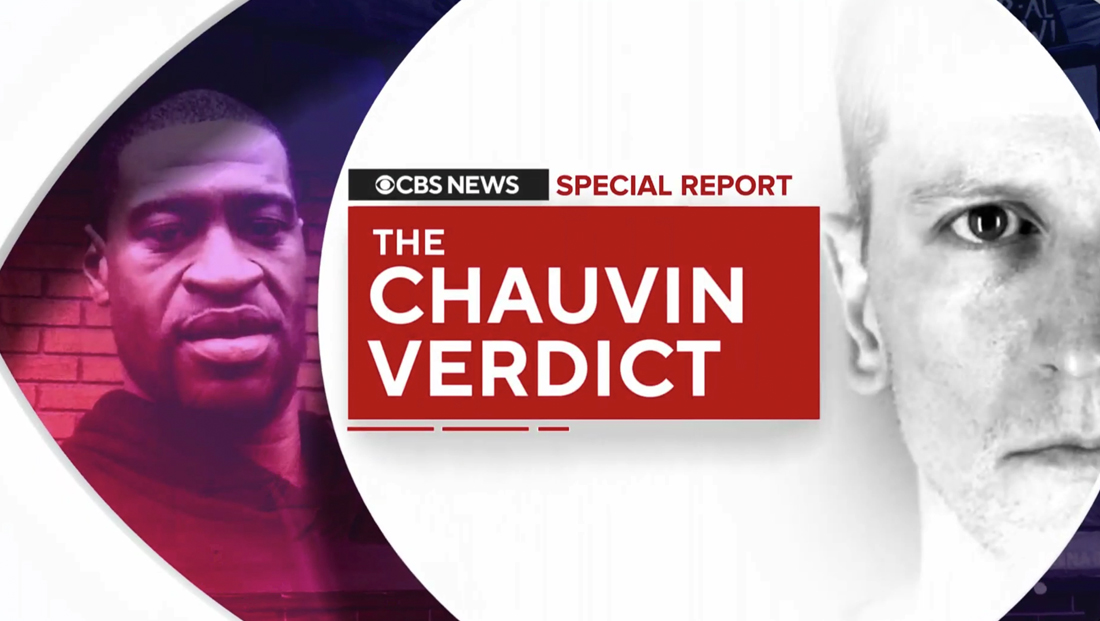 All major U.S. and broadcast and cable news networks interrupted regular programming for special coverage of the Derek Chauvin trial verdict when it was handed down shortly after 5 p.m. eastern time Tuesday, April 20, 2021.

Video feeds from inside the courtroom were provided by the county in a pool-style arrangement. The video appears to “freeze” or “glitch” several times, which are included in the clips captured below.

ABC used its updated special report look introduced in March 2021, including some matching fullscreens. The network used the title “The Death of George Floyd: Derek Chauvin on Trial” in the special report open.

Anchor David Muir was speaking at the time the judge took the bench and transitioned smoothly into the audio and video from inside the courtroom.

CBS News used part of its normal special report open with topical graphics under the banner of “The Chauvin Verdict” featuring a red and violet look.

The network also appeared to introduce updated fullscreen graphics that used either a white CBS eye backdrop or the negative space in the shapes forming the iconic logo as “frames” for imagery.

The network split anchored its special report with “CBS Evening News” anchor Norah O’Donnell in Washington, D.C., and “CBS This Morning” anchor Gayle King in Minneapolis. When the feed showed the judge getting ready to convene court, Jeff Pegues was reporting from the ground near the courthouse and was cut off in the middle of speaking to take the feed full.

CBS used a sidebar to showcase each finding.

NBC used its normal special report open without any modifications. It did put the feed from the courtroom in a three box with graphics showing the verdict of each charge in the upper right.

“NBC Nightly News” anchor Lester Holt hosted the report from the vista wall alcove part of the “Nightly” studio with the L-shaped anchor desk parked behind him and a video loop of the Studio 4E newsroom behind him on the video walls.

Like Fox and MSNBC, CNN was already in the middle of daylong coverage that jumped in and out of Chauvin coverage while juggling other big stories of the day. Even prior to the announcement a verdict was reached, many cable nets appeared to “vamping” to fill time — and that continued once the court announced the verdict would be handed down between 3:30 and 4 p.m. local time, a time estimate that ended up being a bit late.

CNN used a banner along the bottom of the screen reading “The George Floyd Killing: The Verdict is In” that uses an orange and black color scheme similar to competitor MSNBC.

Fox’s right leaning cable commentary channel was in the middle of opinion show “The Five” that featured Jeanine Pirro, who was speaking at the time activity began to be visible in the courtroom and was eventually interrupted to allow the network to take the feed.

MSNBC continued to use its gritty black and orange George Floyd graphics (similar to CNN’s look), including as the background to a split screen showing both the judge and Chauvin during the reading of the findings.

Nexstar’s NewsNation went on air prior to its normal evening and primetime news coverage and featured Ashleigh Banfield, who has a law degree, in coverage. She normally appears on the mostly pre-taped interview show “Banfield” late in the evening.

“Early Edition” anchor Nichole Berlie was on set with “Prime” anchors Rob Nelson and Marnie Hughes and had just tossed to a correspondent when court was reconvened. The network was carrying a small feed from one of the provided cameras, locked on the state seal affixed to the bench, in the lower right corner of the screen.