‘New Day’ recreates its NYC studio look in D.C. thanks to video walls 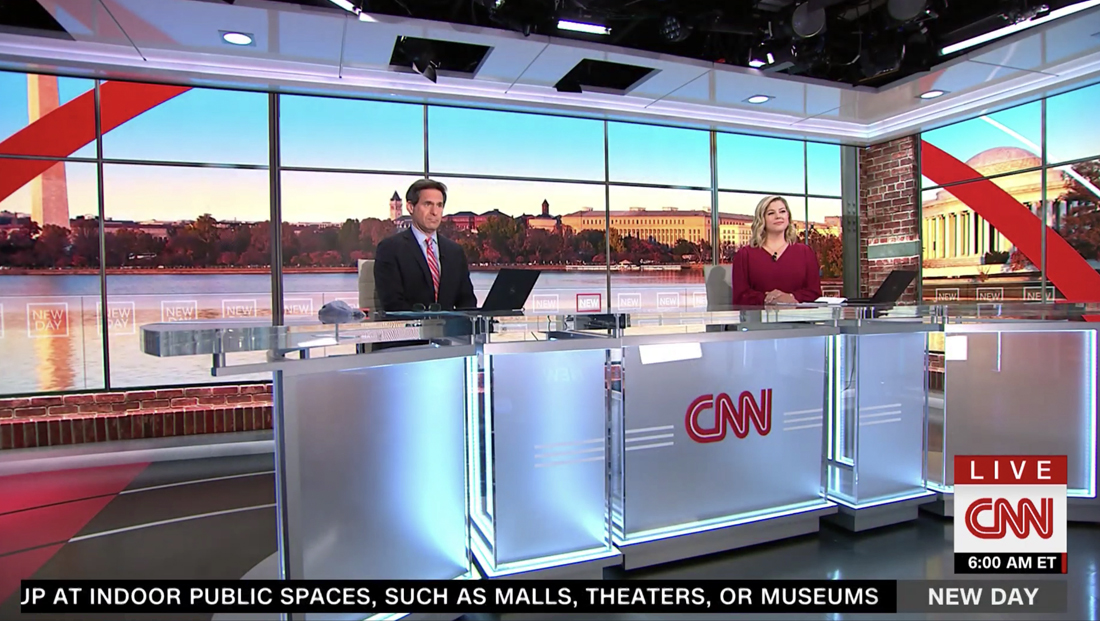 CNN’s “New Day,” which got an on air makeover earlier this month, carried through that new look as it hit the road ahead of President Joe Biden’s speech to Congress April 28, 2021.

The show, which welcomed Brianna Keilar April 19, 2021, and along with her debut updated its opens, graphics, music and on set imagery, originated from Studio D in the network’s D.C. bureau.

Studio D was formerly the “Capitol View” studio that allowed the network to put talent in front of real windows overlooking the Capitol done, but was renovated in 2018 to cover the windows and add an L-shaped video wall installation and circular LED video column.

For “New Day,” the network brought in a boxy, frosted glass fronted anchor desk and fed a graphic that showcased a view of Washington, framed out by simulated mullions and brick trim and columns in an attempt to match the look of the show’s New York City Studio 19Y.

In New York, the purpose built “New Day” set features large seamless LED video panels that are typically used to simulate windows, including with “frames” added in the imagery feed to the screens.

This studio also features generous used of faux brick walls as part of the hard scenery, so in some ways the video wall in D.C. was actually recreating a mix of video walls and the physical set elements back in New York, including the curved red arch that was overlaid on top of the cityscape views as part of the April 2021 updates.

The view of Washington, D.C., behind Keilar and co-anchor John Berman appears to be meant to showcase the city as viewed from the piece of land the juts out to form the western side of the Tidal Basin near the FDR memorial.

From this vantage point, the skyline has a bit of unique perspective that isn’t one of the more common views of the city.

It puts the obelisk of the Washington Monument on the left side with the Thomas Jefferson Memorial on the right, with the Bureau of Engraving and Printing building in the center. Also visible along the shoreline is the paddle boat house on the northwest side of the basin.