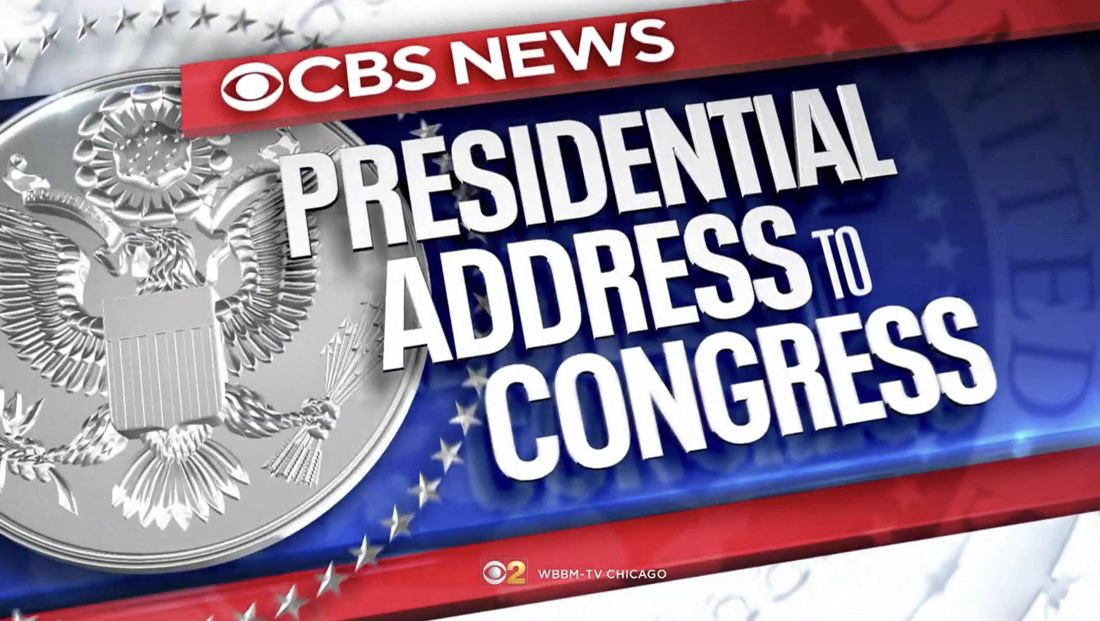 CBS News introduced a new look that combines a red, white and blue color scheme with a sharp rendering of the presidential shield, bold, angled typography and a bold ribbon and star motif.

Stars were also used in the network’s narrow insert banner, with an animated loop causing them to scroll by vertically.

This look was not used during coverage of March 11, 2021’s address, which used the network’s standard special report look. The network has also swayed form using its “America Decides” election branding.

NBC News and sister network MSNBC used the flatter, mostly blue and white look introduced for inauguration coverage back in January 2021, which appears to have become the de facto look of coverage of the 46th president’s administration.

ABC didn’t use a graphical theme per se, instead using the large text headlines on screen in a pre-produced open with its now trademark female announcer.

CNN used its election America’s Choice look with some minor modifications for an open of a special edition of “American Cooper 360.”

The aggressive, typography driven look it used for debate and election coverage promos for spots previewing the coverage that aired throughout the day.

Like election coverage, CNN used some augmented reality elements to showcase Biden’s photo along with COVID-19 modifications as well as photos of Nancy Pelosi and Kamala Harris, whose presence behind Biden in the House chamber would mark the first time two women would sit there in the roles of VP and Speaker of the House.

The network also placed a heavy emphasis on a countdown clock in its “pre-game” coverage, with it often appeared on video walls behind anchors.

Fox stuck used hints of its “Democracy 2020” look but with more of the flat, red, white and blue elements it often uses for promos throughout its normal broadcast day.

NBCUniversal’s Spanish language Telemundo used a biege, tan and blue look mixed with black and white photography and the outlines of portions of the presidential seal under the name “Mensaje al la Nación” (“Message to the Nation”).

The April 28 address is largely considered similar to the State of the Union address given by U.S. presidents, but it was officially known as a “Joint Address to Congress” (referring to the fact both houses typically meet in House of Representatives chamber for the event).

However, State of the Union addresses, which typically take place in February, aren’t usually delivered on inauguration years, since the president just took office a month or so before. This year’s address was pushed later in the year and also only had a limited number of people in person due to the pandemic.