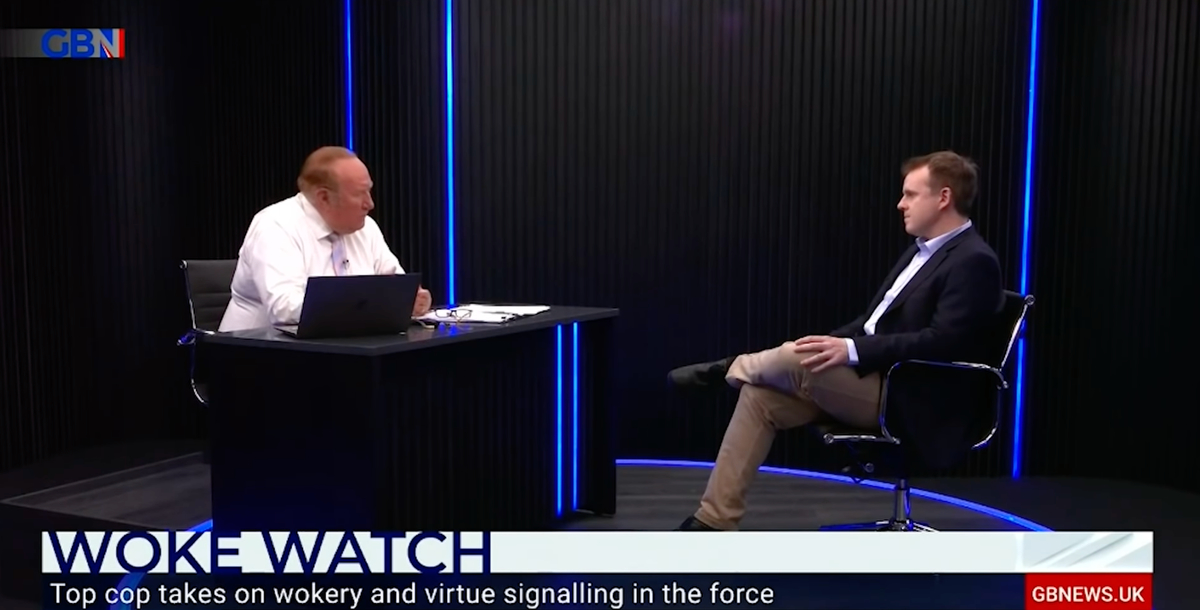 With segments like ‘Woke Watch’ and even a special guest appearance by Megyn Kelly to talk about “freedom from masks,” a new conservative news channel is now live in the United Kingdom.

GB News aims to be the antithesis of BBC News or Sky News, proudly displaying its perspective to viewers.

Andrew Neil, a former BBC presenter, is fronting the network, noting they are not conservative in the same vein as Fox’s conservative channel in the United States.

“In terms of format we are like Fox but we won’t be like Fox in that they come from a hard right disinformation fake news conspiracy agenda. I have worked too long and hard to build up a journalistic reputation to consider going down that route,” noted Neil in an interview with the Evening Standard ahead of the launch.

We’ll see if viewers agree those journalism chops are used to their full potential on his show’s “Woke Watch” segment or with guests like Nigel Farage.

Overall, GB News sees an opening to offer news from a specific perspective to viewers similar to the recent rise in channel offerings in the U.S., including Newsmax and OANN.

The channel was founded by Andrew Cole and Mark Schneider, with financing from hedge fund manager Sir Paul Marshall. Other investors include Discovery, which recently announced its acquisition of WarnerMedia (including CNN), and Dubai investment firm Legatum.

The new facility of GB News, with systems integration from Mediability, is built on a completely IP infrastructure with NDI at its core.

DiNA, a cloud newsroom solution from 7Mountains, interconnects producers, editors and presenters and is the starting point for production with Mjoll’s Mimir providing media asset management. While browser-based, DiNA allows staff to create and publish across linear television, to social media, and the channel’s website from one platform.

Vizrt’s Production Control Suite powers the operation with Viz Mosart for studio automation and the Viz Engine for graphics.

Inside the studio, a variety of PTZ cameras provide the main views with prompting from Autoscript.

For its studios, GB News has opted for a minimal presentation, much to the ire of some on social media.

They were so preoccupied with whether or not they could, they didn’t stop to think whether they should make it look like the Honey Monster ranting in a shipping container. #GBNews pic.twitter.com/OqBeXWoMop

While the studio sits adjacent to the facility’s newsroom, key hours of programming use the studio’s barren walls for their primary backdrop. These walls are covered in a dark texture that appears similar to acoustic foam and has slivers of color-changing LED inlays. The various risers also include muted wood tones with similar inlays. 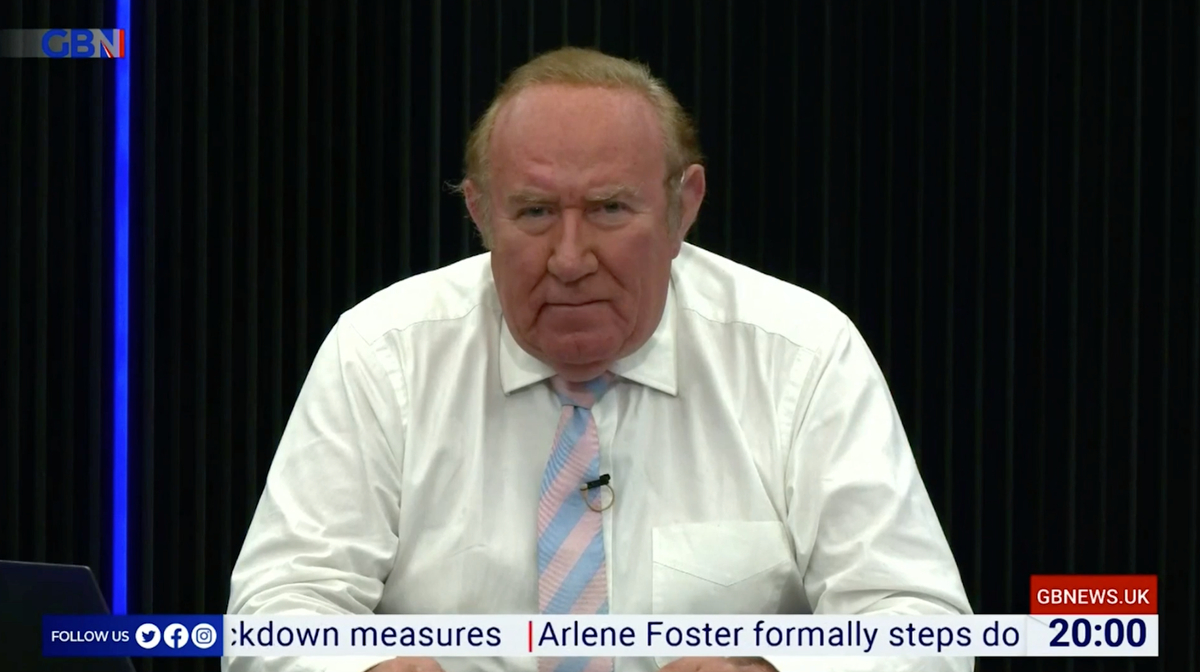 Very first impressions on GB News: jeepers that set is gloomy, so much is in the studio when joy of TV news is the showing not the telling, it does grate to have presenters constantly sharing their opinion – why should we care what they think? Feels similar to TalkRadio or LBC pic.twitter.com/HinM7DNBy7

This palette may have worked in the evening, but, for morning news, it is stark.

A secondary area includes bookcases and a large bar similar to what you’d see in a hotel lobby or conference center with a variety of cubbies.

Unlike many news channels, LED display technology is not present in the studio, with a focus instead on the presenters. 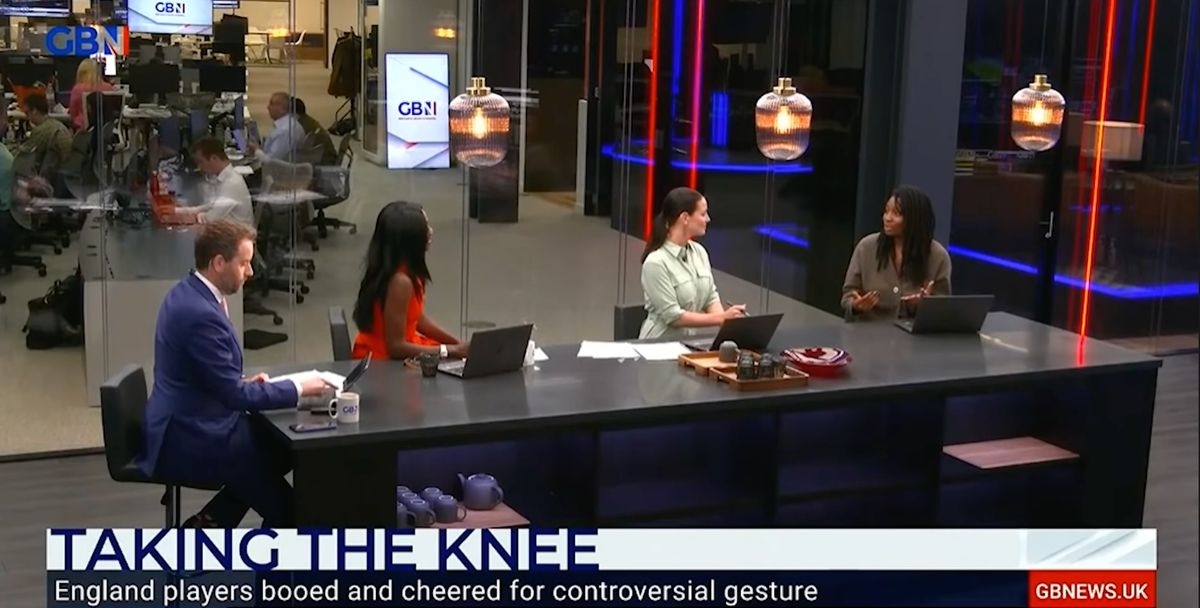 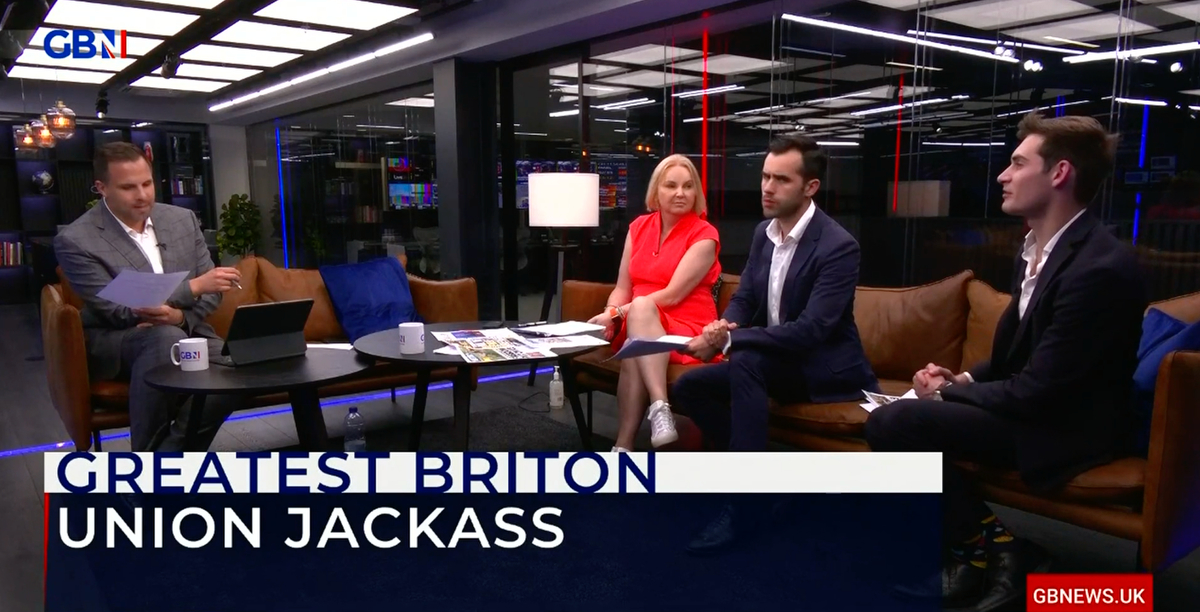 Overhead, the studio has a non-traditional grid with large softboxes that both light the space and become a scenic element in wide views. This approach, however, leaves something to be desired on the camera one-shots, with the talent lacking clean separation from their background and an array of reflections in the glass.

For its launch, GB News suffered multiple technical snafus with sound and transitions.

One reviewer writes, however, that the glitches might help GB News.

“At this early stage the glitches may well have boosted GB News’s cause, giving more credence to the idea that they are ‘disruptors,’ outsiders taking on the slick establishment. The BBC doesn’t have glitches,” wrote Chris Bennion in The Telegraph.

The network’s graphics, however, use all caps titling with a lack of padding around headline text, appearing a bit at odds with the overall understated look.