Even before the unprecedented delay to the 2020 Summer Olympics due to the coronavirus pandemic, NBC and HD Studio knew the sets for Tokyo would take a different approach — channeling a unique combination of environments while still incorporating a sense of global unity through sports — that ended up taking on an even more fitting tone than usual.

“The day we got the call of ‘pencils down’ from NBC was coincidently the same day we delivered files to the fabricator,” said Bryan Higgason, HD Studio’s lead designer and founder, referring to when news began to circulate the Olympics wouldn’t take place in 2020 as planned.

In reality, design and production decisions made months before the word “coronavirus” was ever uttered on TV news heavily drove what viewers would see across TV and streaming in July and August 2021.

For starters, primetime NBC programming would not originate from the International Broadcast Centre, the shared facility each host city sets up to help service the rights holding broadcasters from around the world.

Instead, NBC secured the roof of the Hilton Tokyo Odaiba hotel for its signature coverage with Mike Tirico as host. There, HD Studio’s Higgason, along with Sid Wichienkuer and Paul Benson, made plans to install an outdoor “deck” studio. 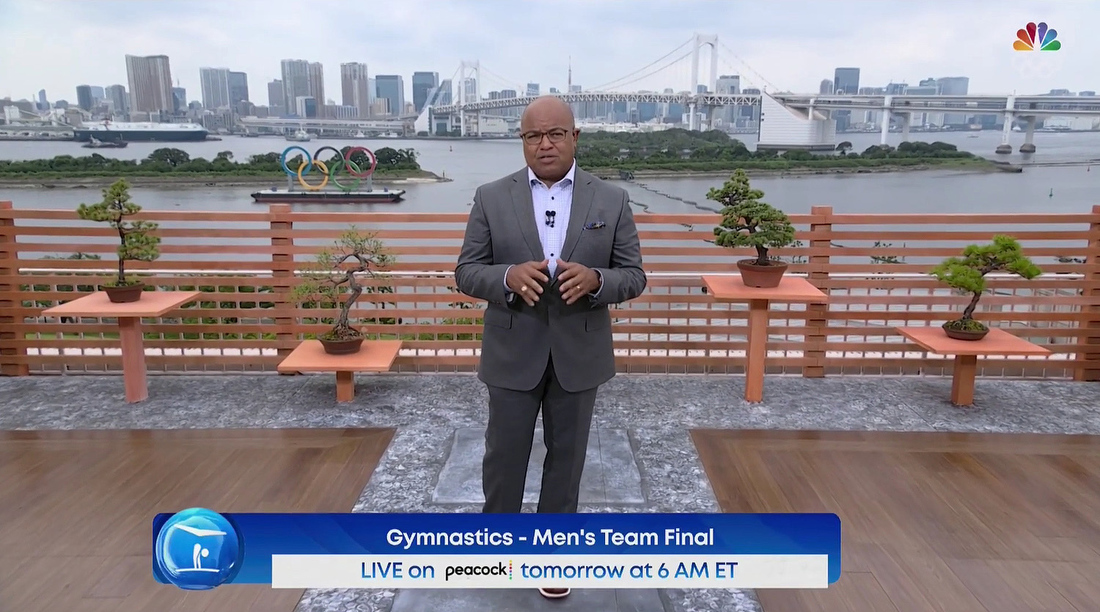 It’s not hard to see why: The building has stunning, sweeping views of the city skyline, including the iconic Tokyo Tower and Rainbow Bridge — not to mention the floating oversized Olympic rings logo deployed on a barge.

Because of its natural outdoor air circulation, the deck ended up coming in handy as NBC determined how to work within a myriad of COVID guidelines and requirements that evolved as the games drew nearer.

While other broadcasters downsized and removed physical studios from Tokyo, back at the IBC, NBC still took over two large spaces in one of the halls. These spaces, designated Studio A and B, would become the home of coverage on Peacock and Twitter, the two primary streaming avenues NBC leveraged for Tokyo.

While streaming isn’t new to the Olympics, Comcast and NBCUniversal had originally planned to use the games as a springboard to help launch Peacock, but the pandemic ended up seeing the streamer debut without the games. The 5,500 hours of coverage spread over NBCU’s broadcast, cable and streaming outlets meant Studio A and B ended up getting significantly more air time than Olympic sets have gotten in the past with multiple dedicated shows coming from the spaces daily. 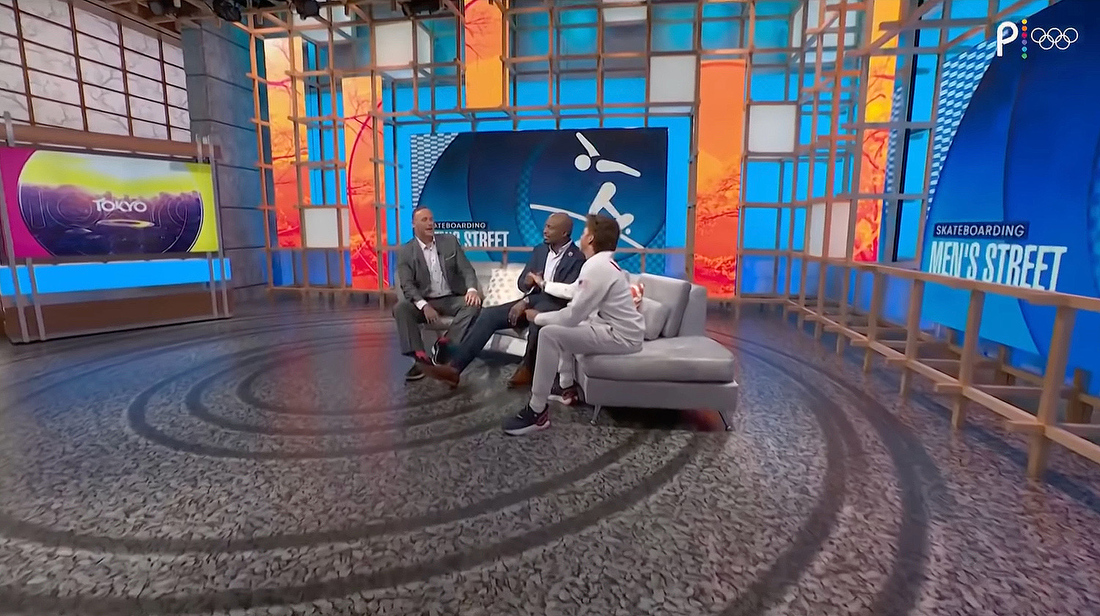 The designs at the IBC — and all of NBC’s Tokyo spaces — are centered around a wood-toned “lattice” structure inspired by a blend of traditional and modern Japanese architecture and woodworking elements that were prominent in the city’s presentation during the closing ceremony of the 2018 Olympics in South Korea. Many of the elements are inspired by Chidori, a Japanese toy that is made from wooden rods.

Although real woods couldn’t be used, careful research focused on matching the tones and grains found in traditional native Japanese yew and cyprus.

The lattice also had appealed to Higgason’s team because it has “inherent movement.”

“It looks solid and structural when you’re standing still, but if the camera moves, the layers cause movement from a geometric standpoint,” said Higgason, while also noting he particularly likes the subtly the shifts in perspective bring.

Perspective, Higgason, is especially important during an Olympics held during a pandemic and he’s proud that his team’s work ended up being able to showcase the sportsmanship of the games.

“The Olympics are bigger than just a gold medal. For us to be able to view all of those things, especially at this time, is really, really important,” he said.

Back at the IBC, both spaces were wrapped in these structures while also incorporated seamless LED video walls from Planar and a blend of vertical banners — with parts of the wood grid “skipped” to make room — and internally illuminated boxes filling select spaces.

In other applications, replicas of traditional Japanese lanterns flutter in the breeze, along with furin wind chimes, which traditionally include a slip of paper with well-wishes written on them.

Although the furins on set didn’t have any messages, Higgason noted how the metaphor of positive vibes from around the globe being shared with and from the Olympic family seemed fitting.

Throughout the designs, backlit surfaces with patterns inspired by local art and architecture added in a layer of color — including a vibrant palette that took inspiration from the hues found in aizome (藍染め), an indigo dye that has a rich history in Japan. 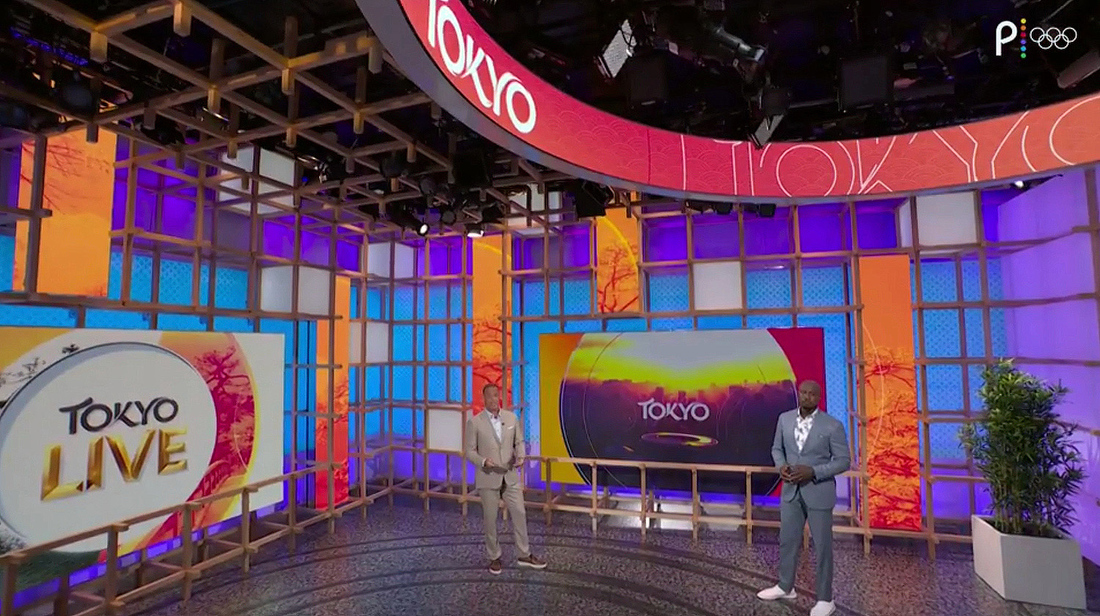 Studio A at the IBC for NBC Olympics.

Studio A is capped by a curved halo LED — which draws some interesting juxtapositions to NBC’s former longtime practice of installing a bulky, circular element above its Olympics studios that doubled as a projection surface.

Both IBC studios can be used in a variety of configurations, with talent standing — socially distanced — within the space, seated or presenting from behind “lecterns” fronted with half of a concave curved cutout. 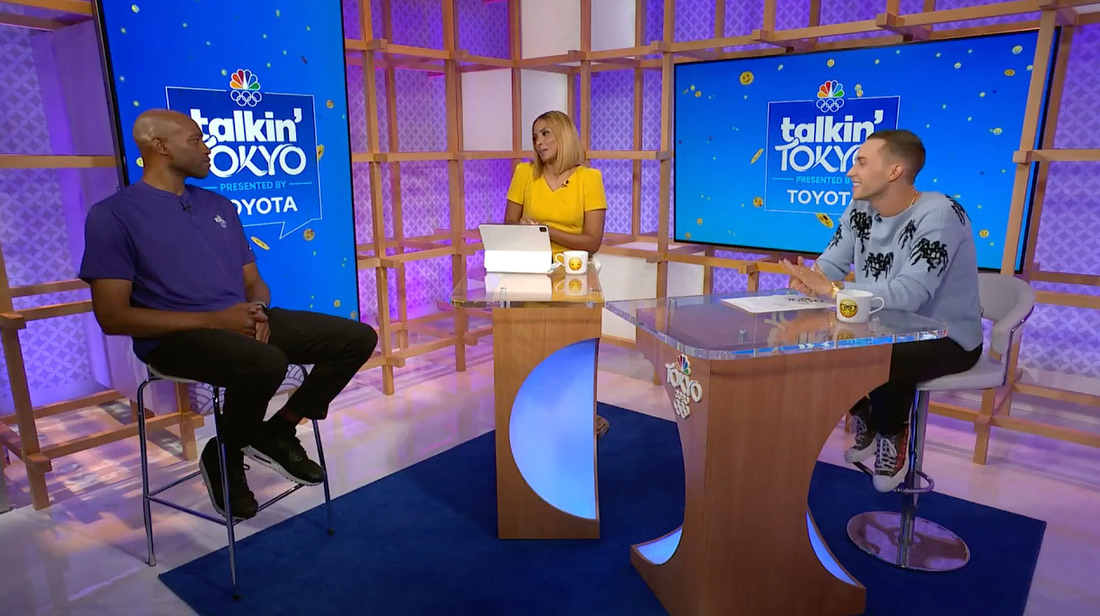 Studio B at the IBC for NBC Olympics.

Whether used separately or together, the cutouts have numerous visual references, evoking Japan’s iconic flag and its status as “land of the rising sun.” It’s also, of course, indicative of the global nature of the Olympics and their power to unify the world — a visual that’s quite literally visible when two of the units are placed near each other.

Splitting the circular element was a bit of a design risk — the team wondered if it could be interpreted as division instead of unity — but Higgason notes there’s always a chance design elements could be viewed in a different way than the team intended.

Instead, his team took the perspective that even if viewers don’t see the complete globe at once, they still make the visual connection in their minds.

“They are unified even if they are separate,” he noted.

Many of these design elements are featured in the network’s other temporary studio as well, which is located near the Hilton. As part of the Olympics efforts to reduce its footprint, the shipping container-sized structure has been used since the 2014 Olympics in Sochi, Russia. 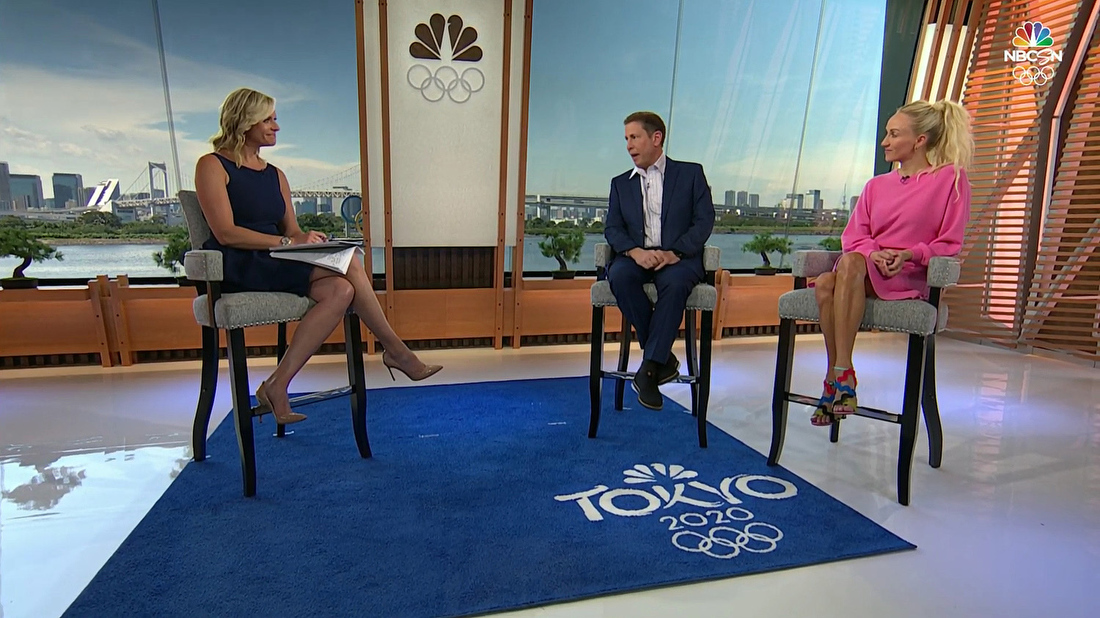 This structure is home to a dedicated, windowed studio used mainly for NBCSN that features elements of the backlit latticework found back at the IBC — as well as some new takes, including horizontal bands and sweeping, angular patterns. A duo of the globe-fronted lecterns can be found here as well, as well as options for standup and seated configurations.

When planning indoor spaces such as this, HD Studio and lighting designer The Lighting Design Group provided NBC with guidance on how to best place, block and light talent according to shifting social distancing guidelines, which ultimately ended up being one meter from each other (about three feet) while athletes had to be kept two meters (about six feet) from talent, but the competitors could be within one meter of each other.

Another indoor location, located inside a ballroom of the Hilton, serves as an alternate studio for when the deck can’t be used — something that turned out to be a necessity after a tropical storm bore down on Tokyo. 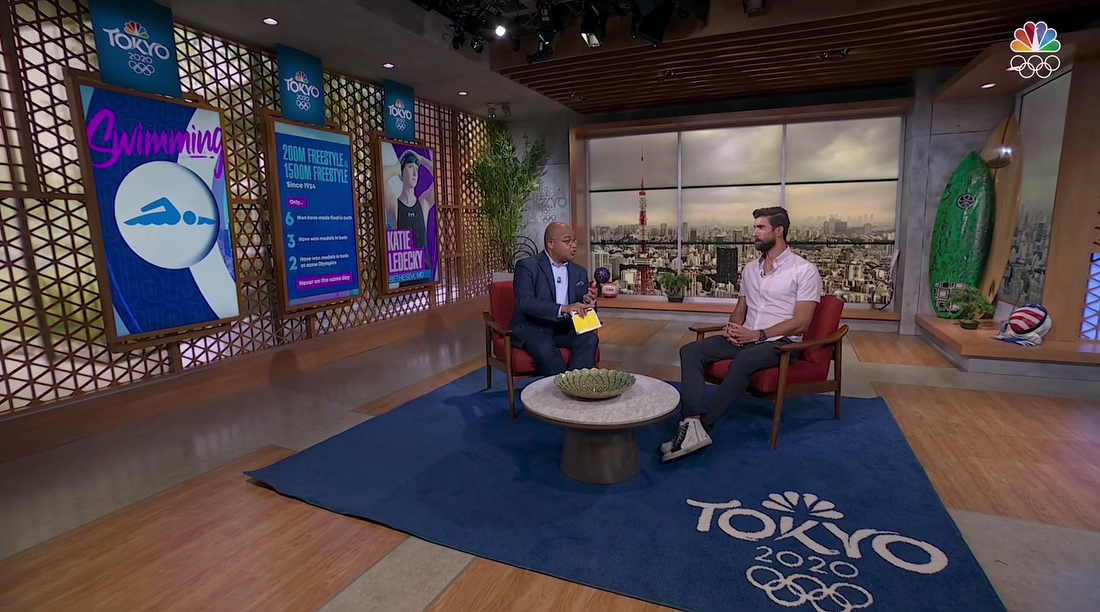 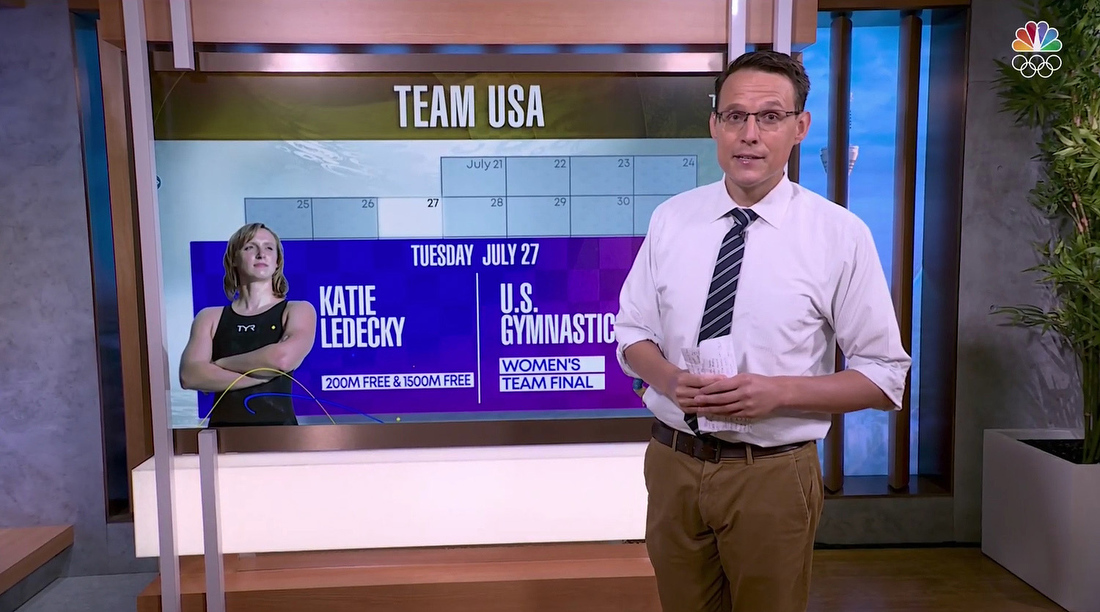 This space includes three vertical video panels set into a wood-toned screened wall along with a simulated “window” created with LED panels along with several other venues, including an interactive touchscreen and standup position that’s been used heavily by Steve Kornacki.

In addition to traditional standing and chair positions, HD also included “benches” on the rooftop deck for both talent and athletes with the flexibility of being able to accommodate different numbers of people without any set changes. 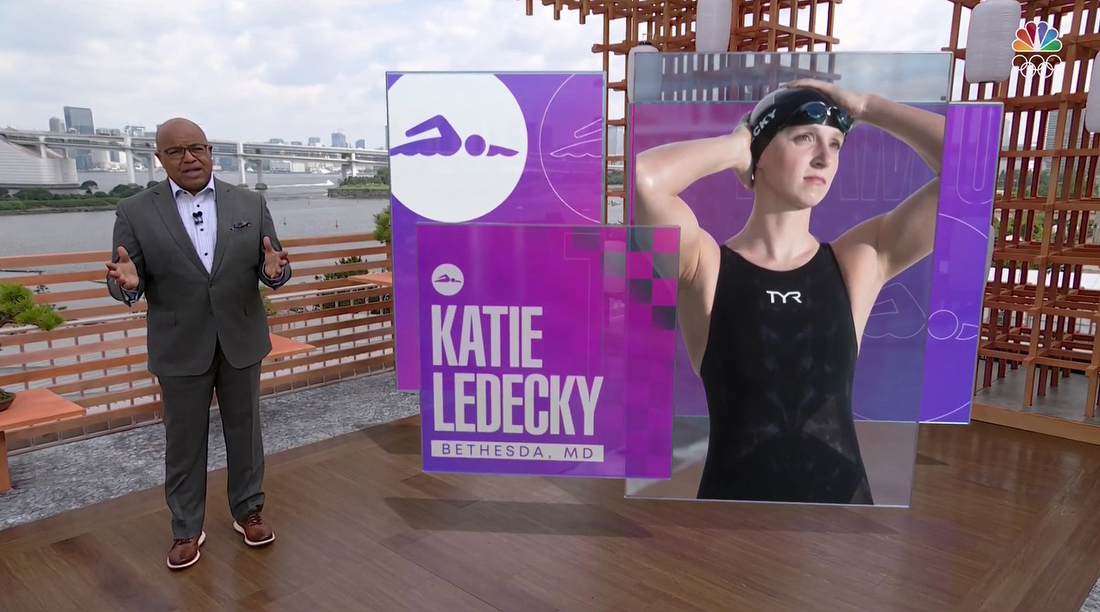 This unique set was also a ready-made canvas for augmented reality graphics, powered by Ross Video’s Voyager solution with rendering via the Unreal Engine and camera tracking from Stype. 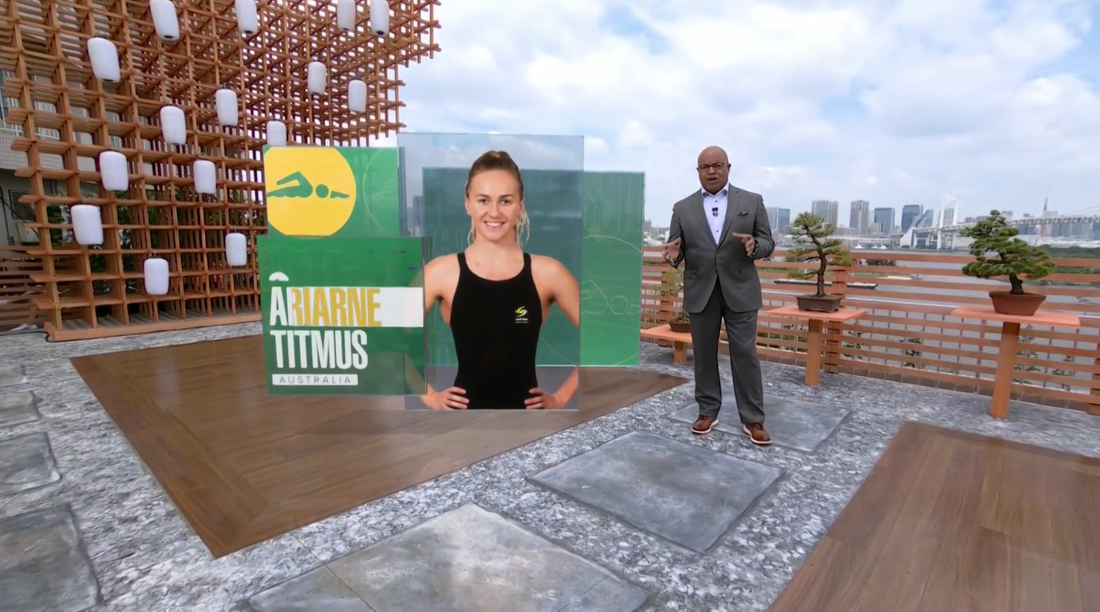 The deck also featured 11 real native Japanese bonsai plants on staggered platforms along the main railing. The plants were purchased locally and are outdoor bonsai that get watered every morning.

“We’ve had a lot of people express both great praise and concern over the bonsai,” said Higgason with a laugh, adding they will also be given to locals after the games wrap.

The custom-built deck, fabricated by longtime collaborator blackwalnut, ended up being one of the project’s biggest challenges.

Stay tuned for the next part of our look behind-the-design as we talk about the unique logistics of moving a set around the world and installing it on the roof of a hotel.

Display Technology in Studio A  – Planar