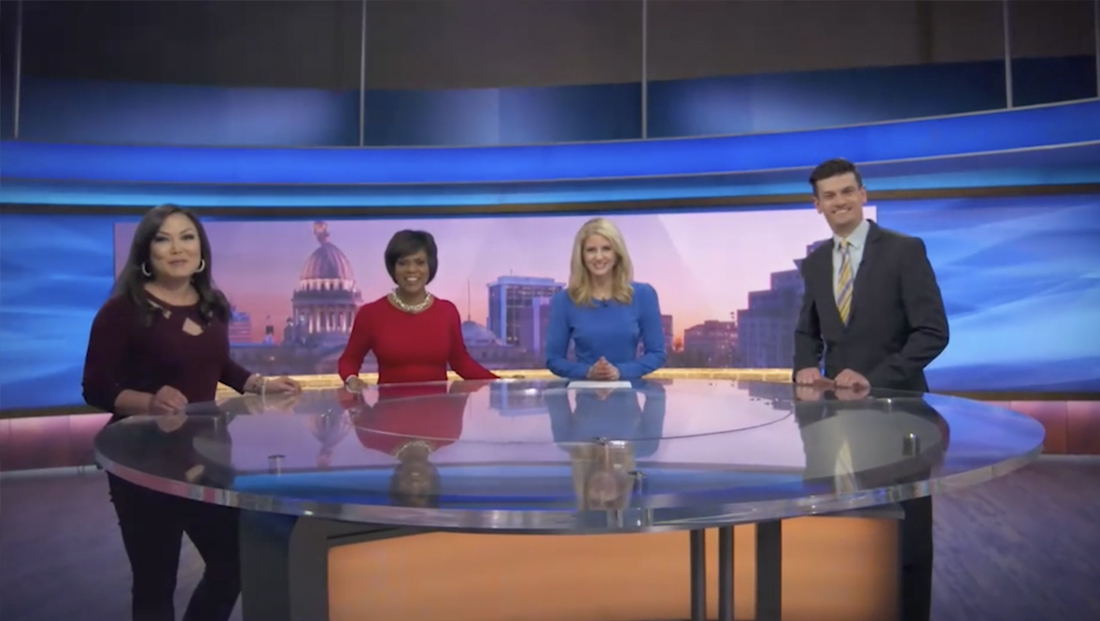 WAPT, the Hearst owned ABC affiliate in Jackson, Mississippi, has produced a promo featuring a blend of its evening and morning talent crisscrossing the studio while touting the message of “get ahead tonight, stay ahead tomorrow.”

The spot starts with Megan West, who co-anchors at 5, 6 and 10 p.m. at the anchor desk, who says her line and passes a sheet of paper off to her 5 p.m. co-anchor Troy Johnson.

Johnson, in turn, takes a short walk before appearing to exit the studio behind the a video wall with chief meteorologist David Hartman taking over and walking over to the weather center past a video wall with a 16 WAPT Weather logo, where he’s joined by 6 and 10 p.m. co-anchor Keegan Fox, who is standing next to a large video panel display a “happening now” graphic.

Next, morning co-anchors Cecil Hannibal and Erin Pickens cross the frame, speaking and then walking off camera when morning meteorologist Adam McWilliams, who apparently entered the studio in the meantime, standing in front the same video wall Harman used, but with a “Weather First” graphic on it now. Meanwhile, Fox steps away from the weather desk in the background.

The shot then follows McWilliams as he walked over to the anchor desk where he joins Fox, Pickens and West, creating a mix of the station’s evening and more talent.

For the final portion of the promo, still shots of Johnson, West, Hartman, Fox and sports anchor Joe Cook, who did not appear in the main part of the promo, are shown along with the station’s logo and the “Jackson’s most watched news team” tagline.

With the exception of Johnson, this final screen depicts the station’s 10 p.m. team.

The entire promo was shot on the station’s Devlin Design Group set.

This isn’t the first “walk and talk” style promo WAPT produced, at least one other one that took viewers around the entire station, not just the studio, was produced in in 2019 that included views of the station’s old set.

That promo, however, wasn’t done in a single take like the 2021 one, with blur effects combined with camera moves used to “hide” the jump cuts between scenes.

The promo is notable because it likely took some careful scripting, timing, camera blocking and rehearsals to get everything to time out as tight as it does.