Sinclair adds website for its The National Desk service feed 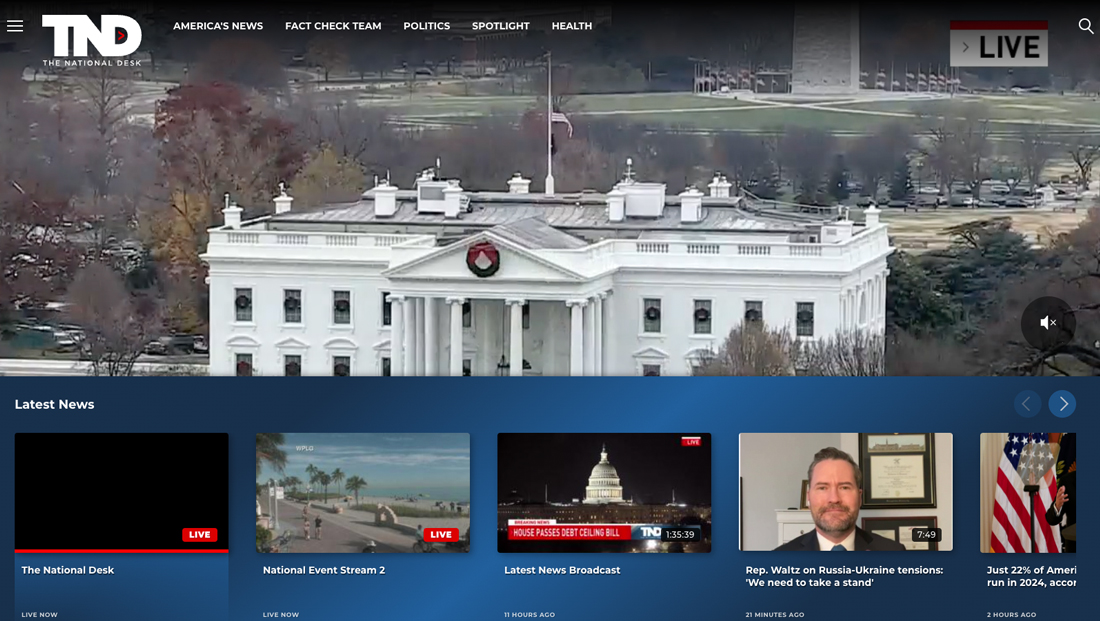 The website, which lives at TheNationalDesk.com, features a layout that puts a preview of the live feed as its primary element.

Below this area, which expands when activated, are thumbnails to other video offerings, including secondary feeds and featured video content.

The site also includes text versions of stories though most of the stories also feature an accompanying video.

The same likes appear in a fullscreen menu accessed via the “hamburger” menu in the upper left, which becomes the primary navigation on smaller screens. It’s not clear why there are two versions of the same navigation on the desktop version, though this could be indicative that the site may add categories later.

Other news sites often include only current or trending stories along with key section front links in the main navigation, while giving users access to a full breakdown of categories in a mega menu, drawer, fullscreen or other similar navigation feature.

The site is supported by advertising, including traditional banner ads and “native” content blocks interwoven into related stories sections of pages. Video clips also include ads.

The canonical domain for the site includes the article “The” in front of it, though Sinclair also owns NationalDesk.com and redirects users who enter that.

In some ways, the use of “The” in the site domain is similar to the branding format many Hearst Television station websites used previously, such as “TheKansasCityChannel.com” for KMBC (the group still owns the “the” domain and redirects to kmbc.com now).

Launched Jan. 21, 2021, The National Desk culls content from Sinclair stations across the country as well as original content produced at its Washington, D.C. headquarters, which are co-located with WJLA, the market’s ABC affiliate owned by SBG.

The programming is available via Stirr, a multichannel ad supported streaming platform launched by Sinclair in 2019.

The National Desk feed is also aired on select local stations owned by the company, replacing paid programming, religious programming and even syndicated shows in some cases.

It is separate from the “Full Measure with Sharyl Attkisson” and “The Armstrong Williams Show” Sinclair produces and offers its stations.

The channel is largely marketed as a “bias” free alternative to other stations, despite being run by Sinclair, which has been known to require its stations to air right leaning commentary and documentary content.

The station also, for a time, required its stations to include an American flag in its lower third graphics, though that ended in 2019.

In 2018, the group notoriously had most of its stations air a promo attacking so-called “fake news” that features local talent reading from the same script. It become known as a “hostage video” and was widely derided by journalists.

It also garnered attention when it refused to let a left leaning ad to air on its stations. It later relented, but promoted itself before and after the spot.

Sinclair also made headlines for its use of “Code Red Day” branding that group management required local forecasters to include in local newscasts. At least one forecaster left his station after publicly deriding the practice on air.

Meanwhile, The National Desk branding itself harkens back to the 2015 introduction of the “Terrorism Alert Desk” segments produced at company headquarters and then aired on most of its local stations.