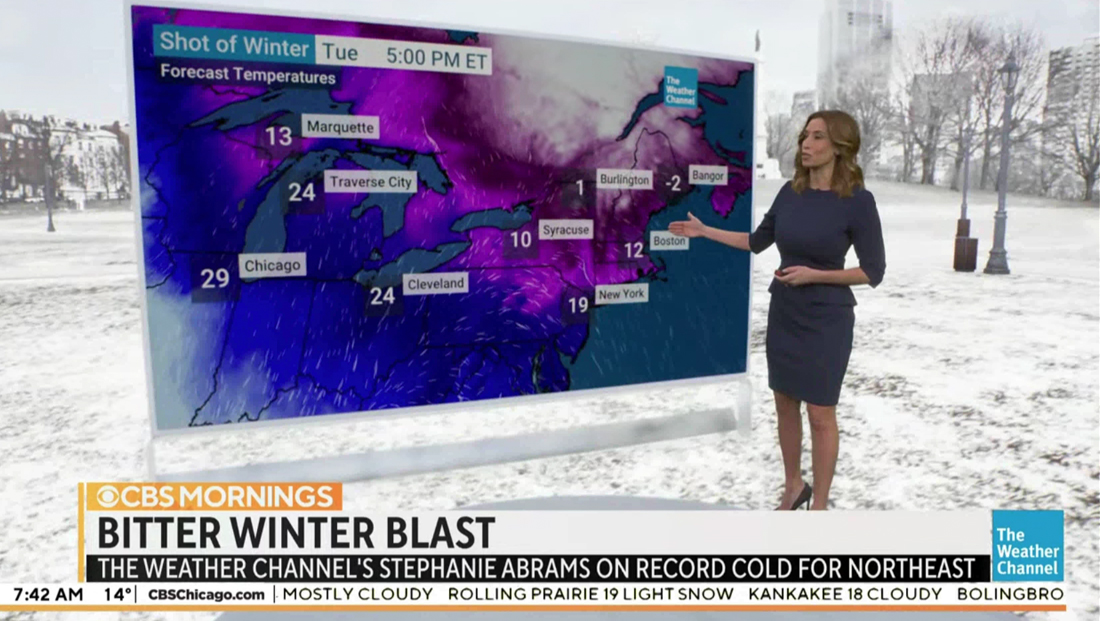 “CBS Mornings” tapped into the resources of The Weather Channel powerhouse for coverage of chilling temperatures and winter weather that’s hitting much of the country Monday, Jan. 10, 2022.

About 40 minutes into the newscast, co-anchor Gayle King tossed to The Weather Channel’s Stephanie Abrams.

King noted Abrams was in TWC headquarters and Atlanta, Georgia, but, somewhat confusingly, at least at first, Abrams appeared on screen seemingly standing in the middle of a snowy park wearing no jacket and clearly not dressed for the “weather,” even though she was really standing in one of the network’s virtual studios and the wintery scene and weather maps behind her were all computer generated.

It became more apparent that the environment Abrams was in wasn’t real when a weather map “opened” next to hear seemingly out of midair.

She eventually explained that the snow was, in fact, meant to be a “virtual view” of Boston, depicting its current conditions.

The segment stumbled a bit when Abrams attempted to switch over to the requisite list of heater safety tips, with the map initially re-appearing with a “Shot of Winter” map on it before switching to the correct graphic, but that briefly went back to the original map before finally changing back to the correct list.

Abrams continued discussing the safety points, though it’s not clear if she noticed the glitch with the graphics.

The entire segment featured The Weather Channel logo in the lower right side of the screen.

Previously, CBS would typically rely on a forecaster from one of its local owned stations, including ones in New York and Chicago, to provide updates when a national or regional weather story made headlines, since the show doesn’t have a regular in-house forecaster like “Today” and “Good Morning America.”

These segments, however, didn’t make use of the virtual studio look, instead relying on more traditional maps that were either shown fullscreen, on a key wall or video wall — and occasional augmented reality.

It’s not immediately clear if this is a the start of a new partnership between the networks or perhaps was meant more as test run.

Neither CBS or The Weather Channel responded to NewscastStudio’s requests for comment.

The Weather Channel is currently owned by Byron Allen’s Entertainment Studios division, but at one time was part of NBCUniversal, and it wasn’t uncommon to see the WX Channel team appear on shows such as “Today” and “NBC Nightly News” in addition to NBC’s own slate of forecasters.

Abrams herself at one time co-hosted an early morning show with “Today” co-host Al Roker on The Weather Channel called “Wake Up with Al” that originated from both New York and Atlanta.

Roker himself is a not a meteorologist, unlike Abrams, though he did at one time hold an active American Meteorological Society Television Seal and reportedly has taken courses in weather and climate related topics over the years.

CBS does have behind the scenes meteorologists on staff and other morning show forecasters, including ABC’s Ginger Zee and Rob Marciano hold degrees that qualify them as meteorologists.

CBS Mornings, the weather channel, wake up with al