BBC Sport was forced to rethink its Olympic coverage for the 2020 games — held in 2021 — as the coronavirus pandemic challenged the broadcast to reinvent its on-air presentation.

But before the pandemic was even on the world’s mind, BBC was already thinking virtual for the 2020 Summer Olympics.

“Originally, the plan was that we were going to Tokyo. … We were still going to utilize a green screen studio in the IBC because we couldn’t really find a physical location based on what we were looking for,” noted John Murphy, creative director of motion for BBC Sport.

With this in mind, BBC solicited pitches from designers with Toby Kalitowski of BK Design Projects and Jim Mann of Lightwell selected for the virtual design and Moov for the integration.

“We got a wonderful pitch back which kind of blew all our minds really. It was fantastic,” said Murphy. This initial excitement, however, also created questions on whether the design would be achievable with current technology. 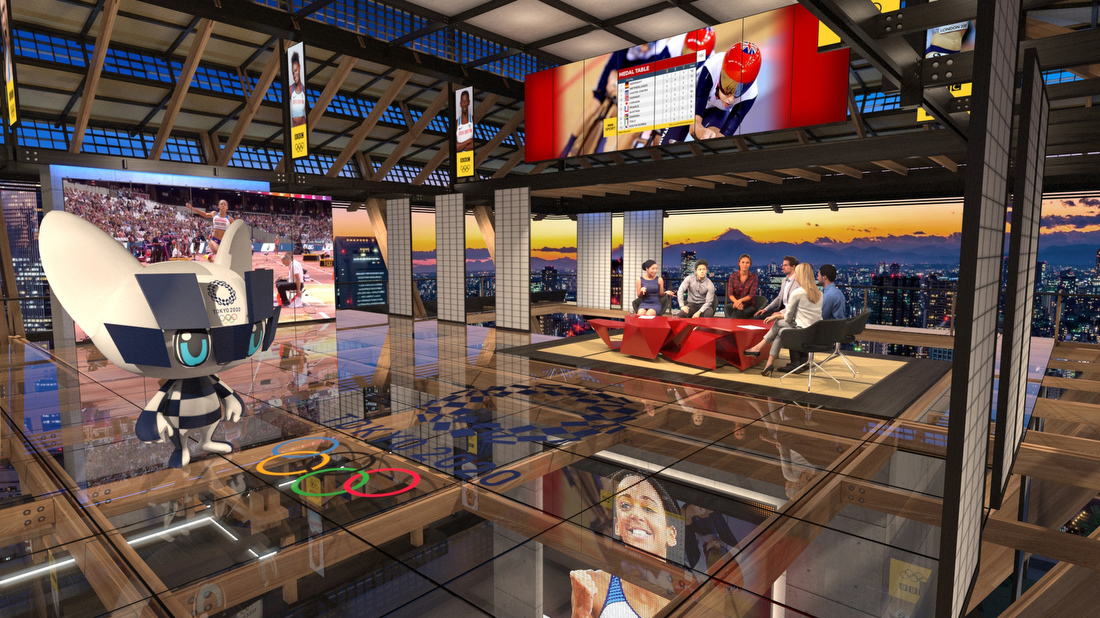 Rendering from the initial design pitch to BBC Sport. 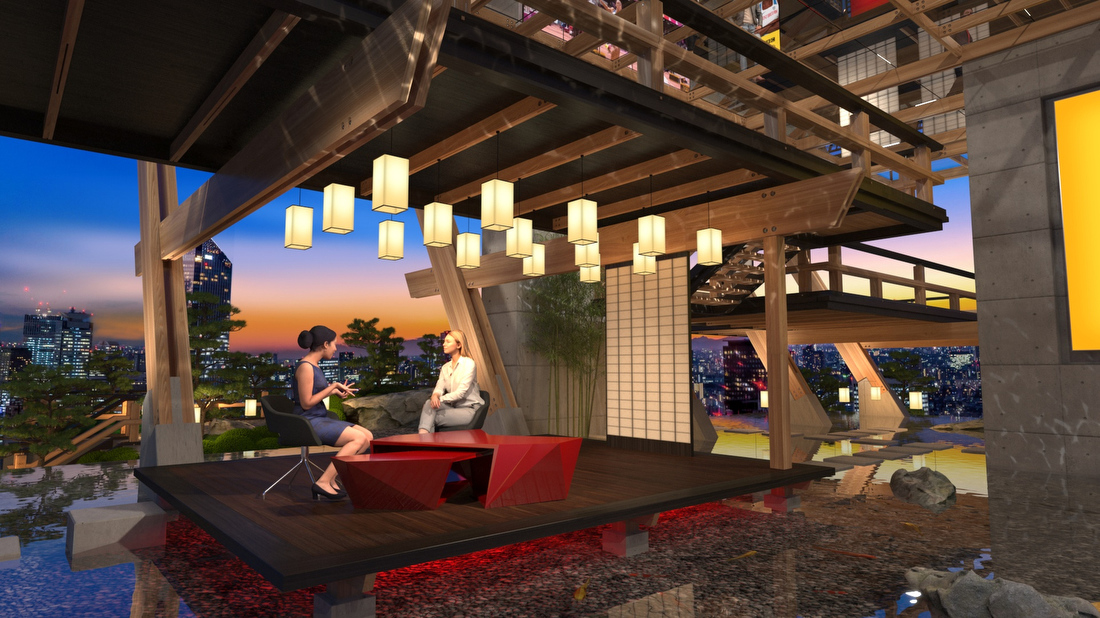 Rendering from the initial design pitch to BBC Sport.

“There may be a bit of a misconception that it’s virtual — therefore it’s easier. And I can assure you it isn’t. I think it’s important to know that if you want to do something really well with the virtual world, I think it takes a lot of hard work,” said Murphy.

A virtual view of Tokyo

“The kernel of the idea was we were on the top of a building in the middle of Tokyo. It was kind of an amazing pavilion looking out to Tokyo,” said Kalitowski.

Kalitowski noted it was important for the space to go beyond a traditional studio.

“It’s always weird to me: You do a virtual set and then you somehow box yourself into a studio,” said Kalitowski. “It’s an easy thing to fall into, but once you free yourself from glass or some kind of mullion or some kind of enclosure, that’s an incredible thing. Suddenly you’re really immersed within the city.”

“What was created was a Japanese kind of Zen,” added Murphy. “You saw the hustle and bustle of Tokyo, but you were taken into a kind of a calm.” 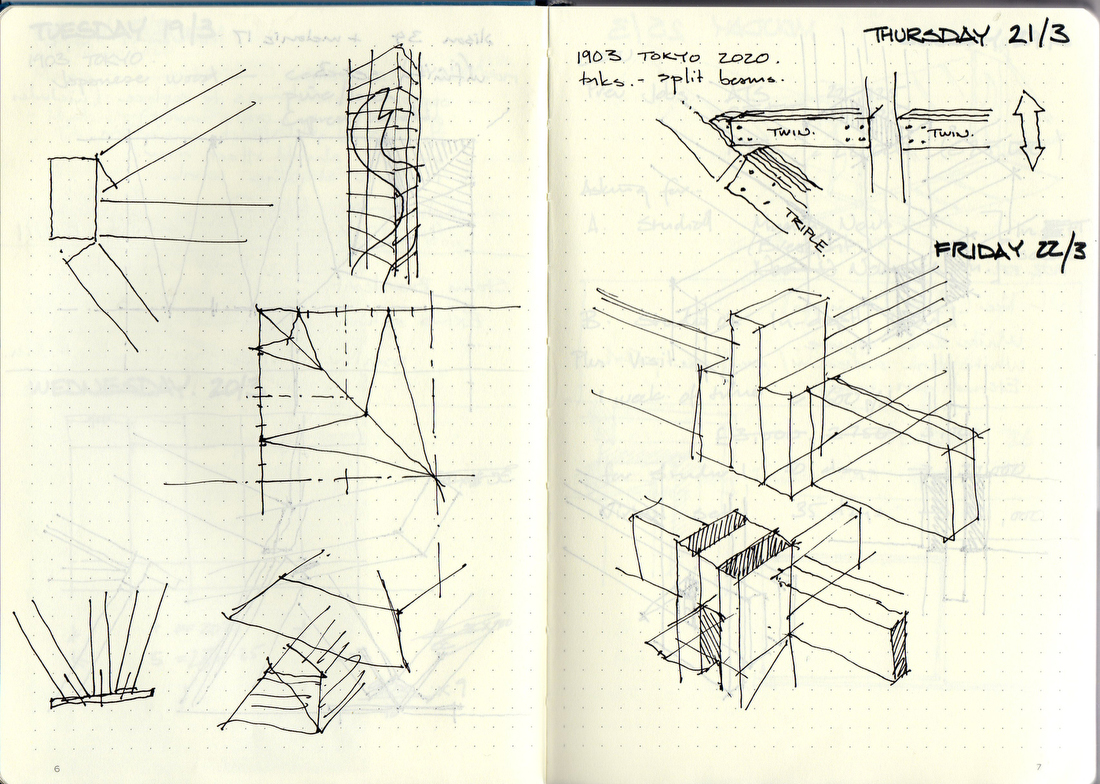 The main structure of the virtual set was created around interlocking timbers, which turned out to be a happy accident for the design team as this aligned closely with one of the Olympic venue designs. 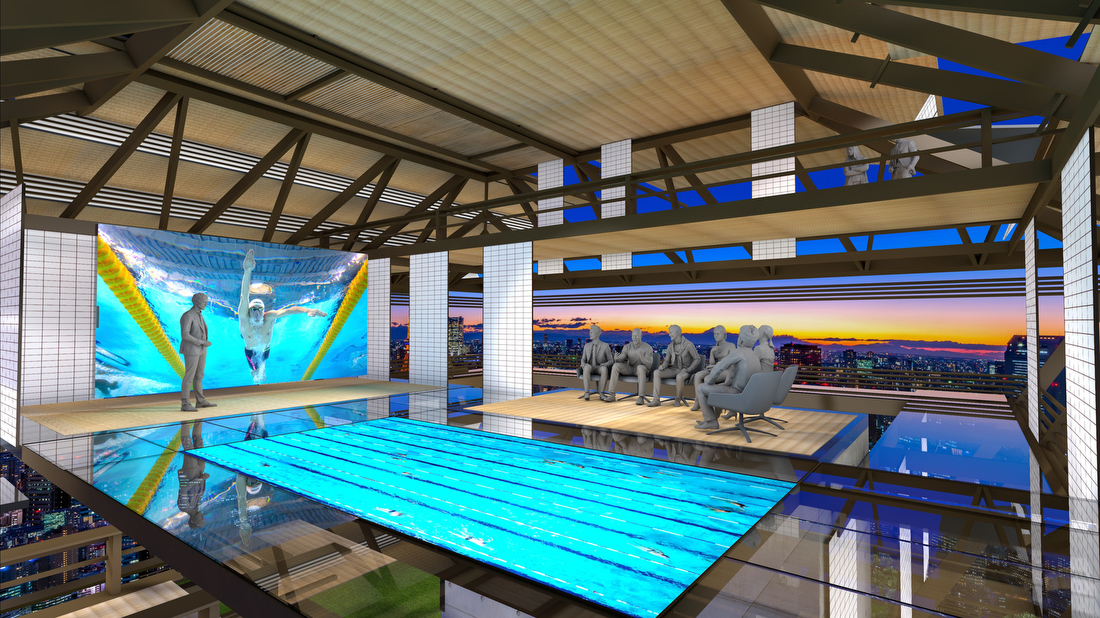 Example of design development during the process.

“I think there’s, there’s a fine line between a cliche and a motif or a reference. We were very careful in trying to sort of walk that line,” added Mann. “It was trying to keep it serious on the one hand, but also retain that playfulness — something fun — a celebration of Japanese references and culture.” 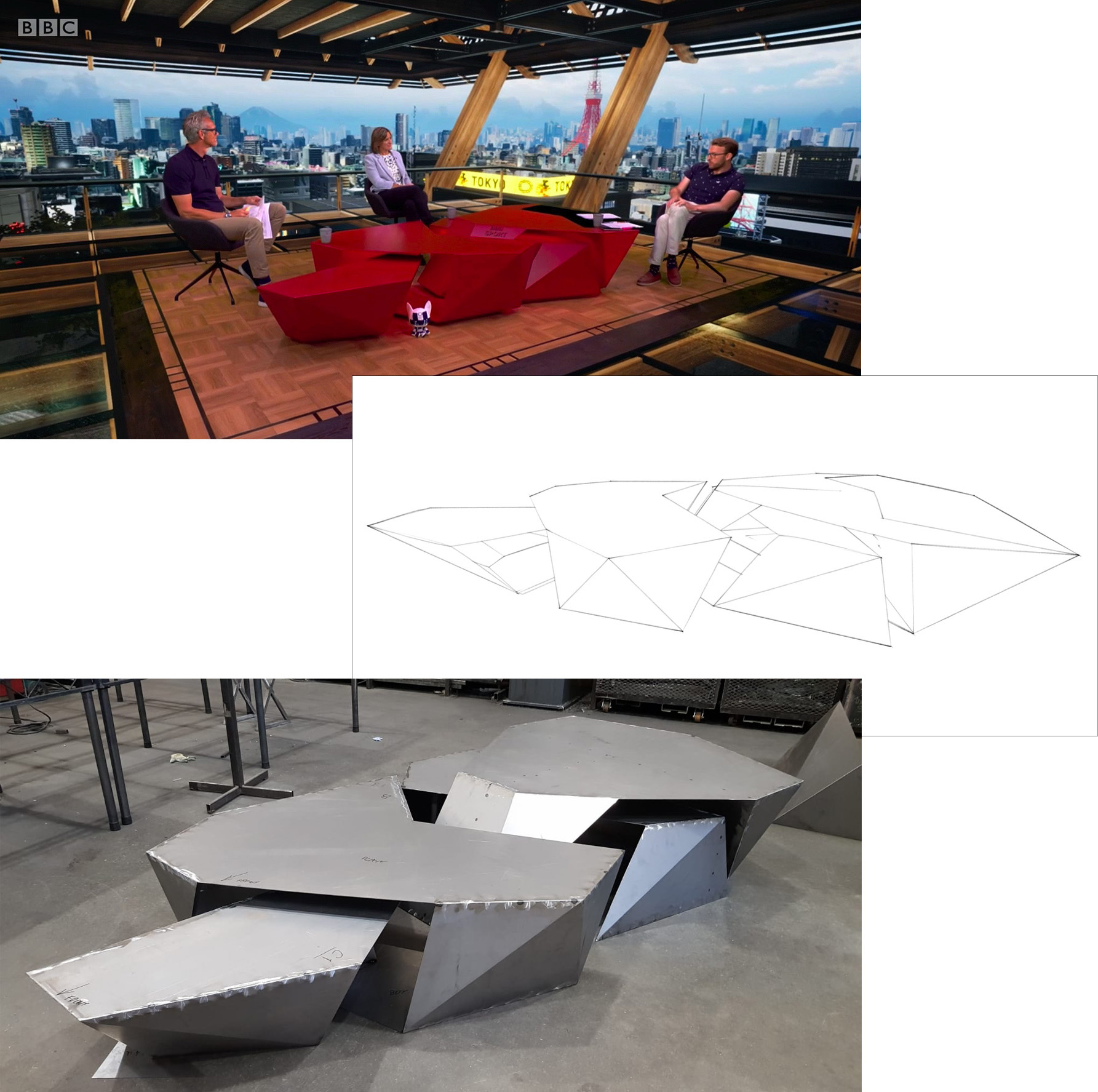 The final result included three key presentation areas including a runway leading into the structure, the main area – with the desk and multiple stand up locations – and the lower deck. 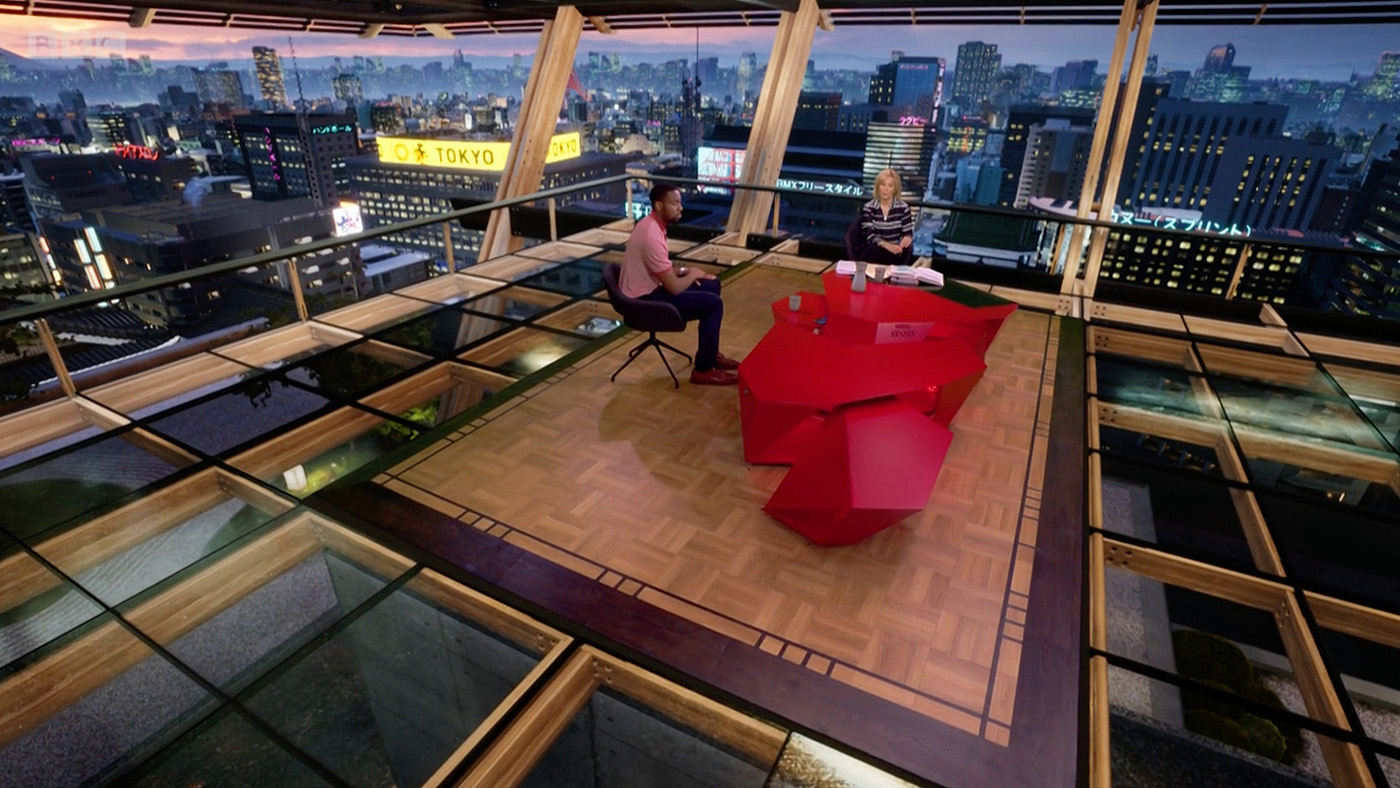 Then the world shut down and the pandemic forced the project, and the Olympics, on hold.

“We built the set, built the floor, all the physical assets and we did a full standup test,” said Kalitowski. “We did that before this fear of cancellation, so it was all boxed up and ready to go.”

“Then everything got put on hold. We came back hoping, fingers crossed, that the Olympics were still going to go ahead. … We had this beautiful set sitting there waiting,” said Murphy. “It might not have ever seen the light of day.” 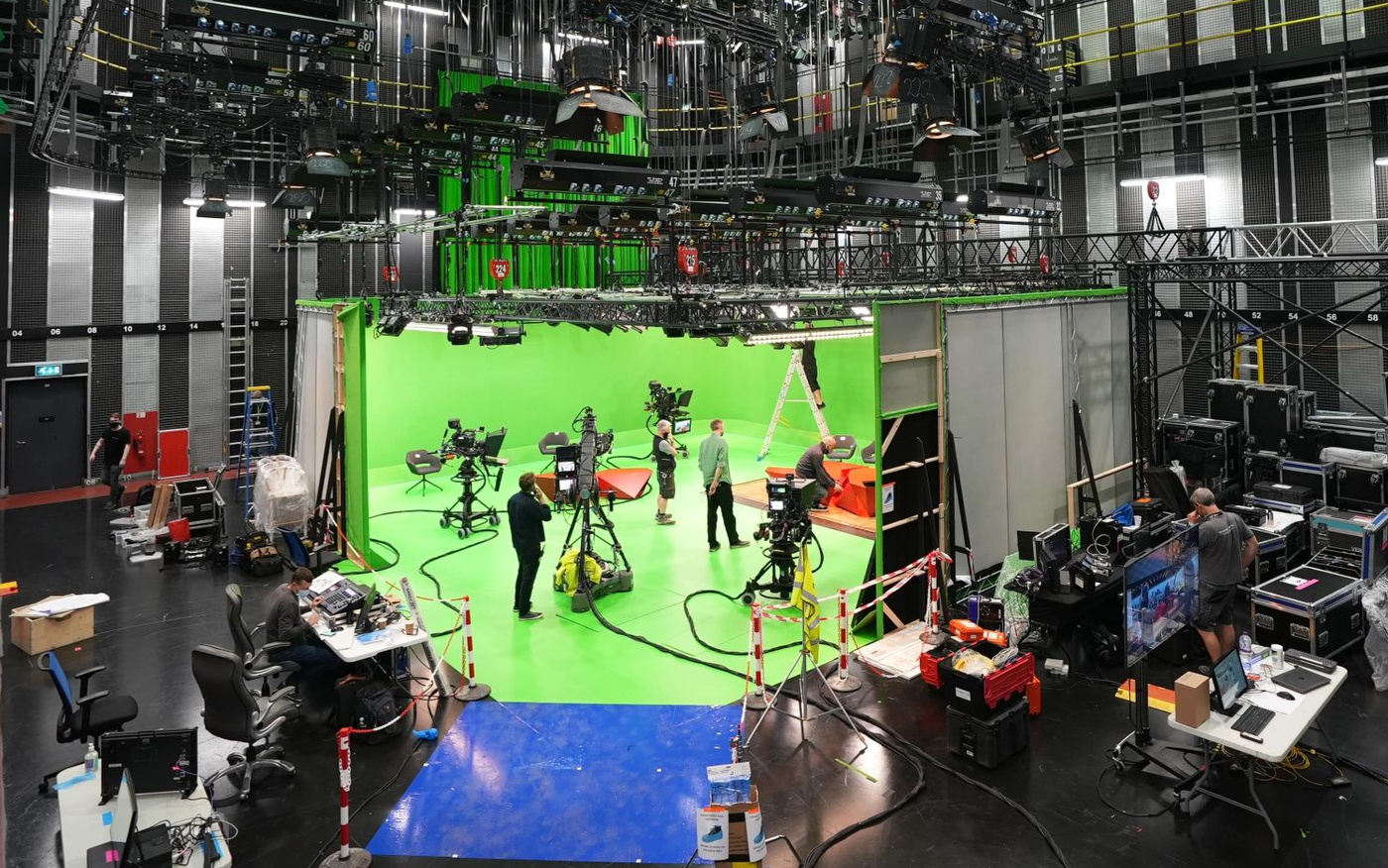 The studio at Dock10.

Opting out of a studio in the International Broadcast Centre in Tokyo, the network instead chose to base its production at Dock10 in Salford, Greater Manchester, keeping its talent in the United Kingdom.

“From an editorial point of view and from a BBC standpoint, it actually worked out better being from Manchester,” said Murphy, who noted many viewers didn’t even realize the broadcast was not in Tokyo.

“We’ve reached a critical stage [in virtual design] because I think a lot of the feedback was ‘Oh, you’re not in Tokyo.’ Previously, it had been, ‘It looks a bit fake’ or ‘it’s not quite right,'” said Mann.

“We built the green screen studio to fit in the IBC studio space,” said Kalitowski. “The great thing was we were able to essentially take that footprint.”

Everything including the lighting grid was transferred to the Dock10 facility. “Really, it was quite surprising how we were able to make that switch,” said Kalitowski.

From there, integration partner Moov fine-tuned the virtual design and integrated it with Brainstorm’s InfinitySet solution, including rendering from the Unreal Engine. 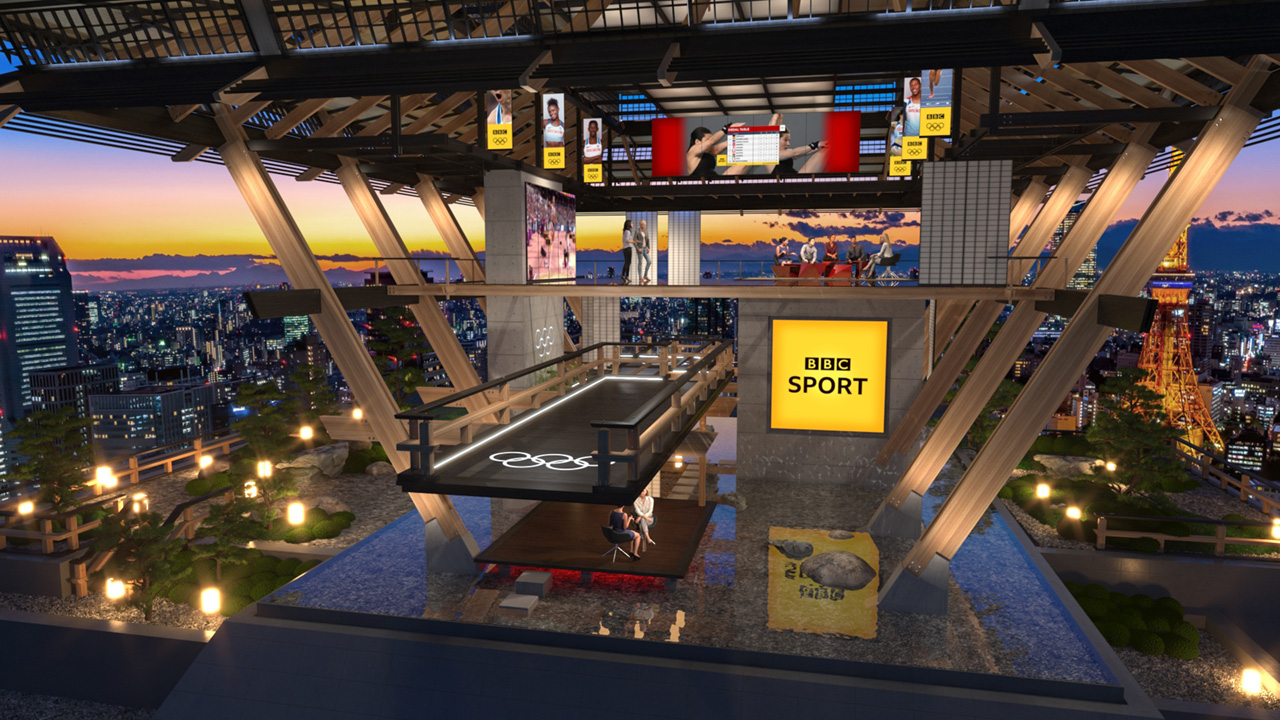 The unknowns of the coronavirus, however, did continue to present questions for the broadcast. “There was quite a lot of work around planning for every COVID-19 eventuality,” said Kalitowski.

Plans were drawn up for different configurations of hosts and analysts based on social distancing guidelines in the United Kingdom.

“It could have been really catastrophic, and I think going virtual obviously helped us out massively,” added Kalitowski. 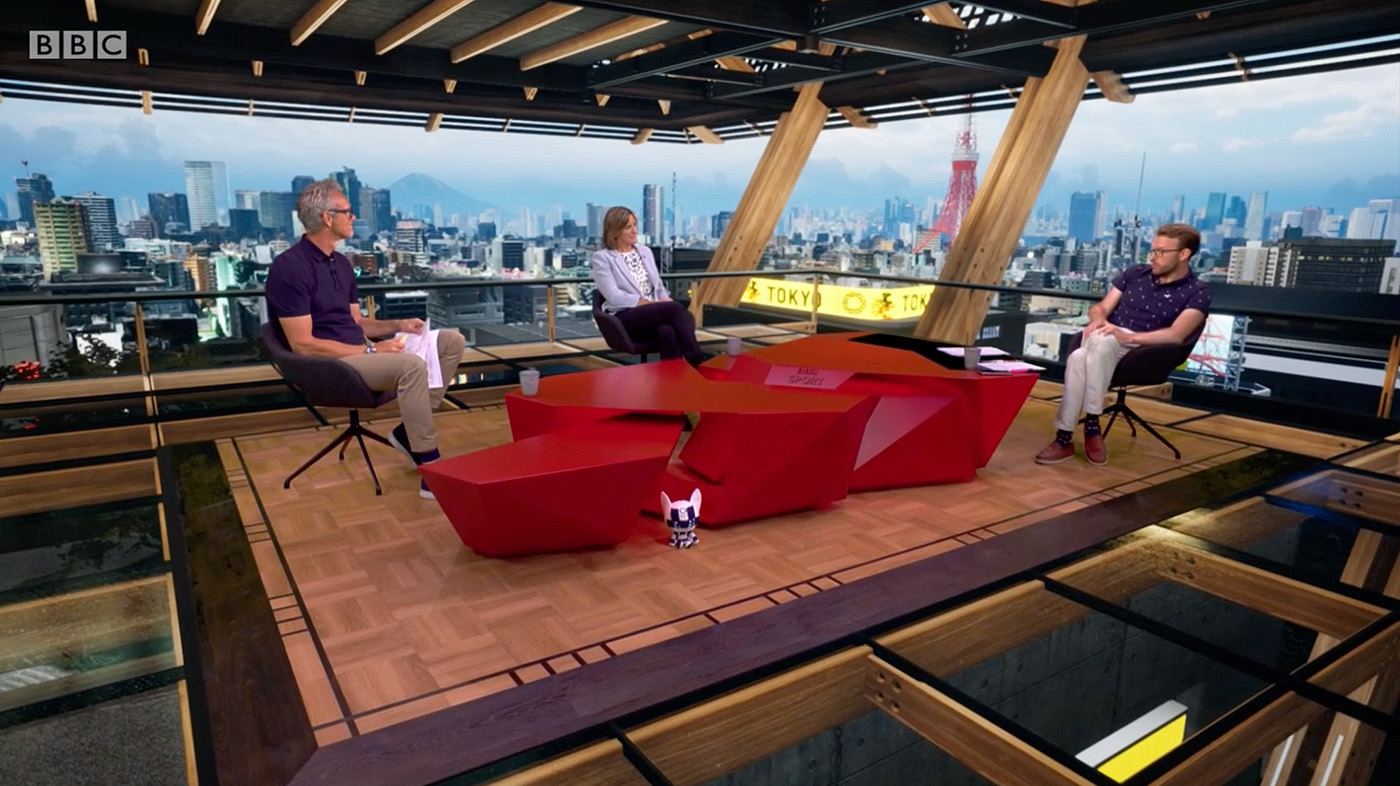 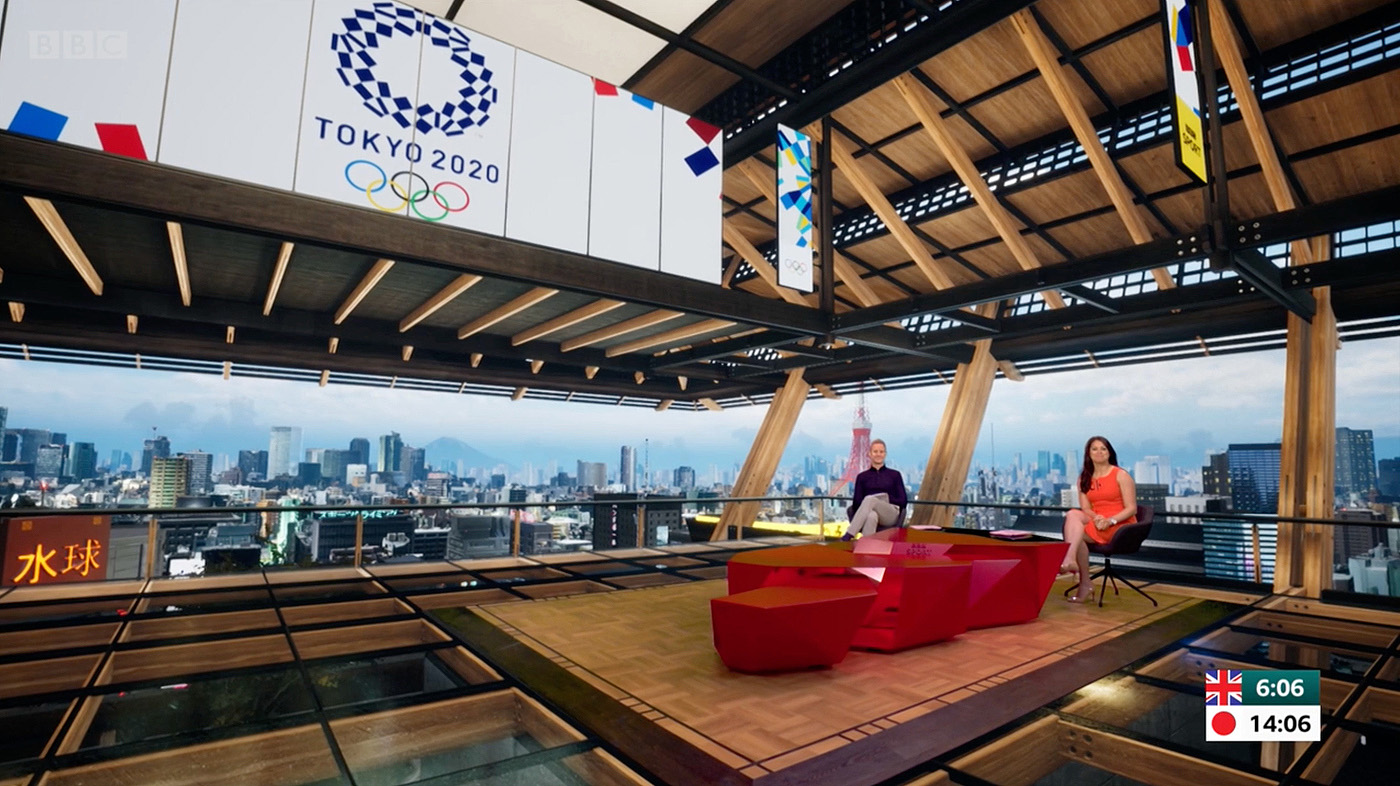 The set’s lighting, from Dave Gibson, was also a key factor to ensure the realism of the virtual space.

“If the lighting isn’t quite right then the illusion falls down,” said Mann. “We were putting together the cityscape, and there was a question of which one leads the lighting. … Making sure those two parts come together [is important] because if you don’t get it right, that’s when the realism can really fall down.”

“At some point in the future that will be a specific job of a virtual lighting director because at the moment it’s still separate,” added Kalitowski.

Kalitowski sees a larger shift in how virtual production workflows are aligned, with design and lighting working hand-in-hand to ensure a realistic result and the design process occurring fully in the rendering platform.

“Broadcast seems to be lagging behind,” said Kalitowski with regard to workflows. He noted that the Unreal Engine is rapidly changing his and Mann’s creative process and the future of virtual production.

BBC Sport, meanwhile, continues to evolve its virtual presentation with most of its sports programming now coming from chromakey or hybrid studios.

“It was a great project to work on,” said Murphy. “A lot of the people put in a massive, massive shift. … It’s been a great result.”