A key piece of Al Jazeera’s 25th anniversary relaunch was a dynamic graphics package and brand identity that could tie together the programming and studios of the channel.

Having worked with Astucemedia for over 15 years on both design and data integration projects, Al Jazeera invited them to pitch a new direction for the network.

“What was most important for us was to get a very flexible, dynamic, functional brand,” said Mohamed Moawad, manager of output at Al Jazeera.

Based on the research of the channel’s audience, a new direction was established for the Al Jazeera Arabic network, moving it beyond news headlines and towards interaction, discussion and deeper analysis.

“You have to bridge this gap and make sure it’s not ‘we broadcast, they listen,’” noted Moawad. “You need to have a full circle of engagement that gives the audience the opportunity to engage with you.”

The overall project touched nearly every piece of on-air presentation and storytelling, ranging from new studios and music to even directing and camera placement.

At the same time, Al Jazeera also wanted to enable its journalists to create content for new platforms through a modern graphics workflow.

“We picked Astucemedia because we know they’re the best at developing templates,” said Moawad. “If you can make sure the journalists, the technical guys and the newsroom can use the templates to display the story in an attractive way, you’re able to achieve the goal (of making the broadcast more compelling).”

“I believe we were probably one of the only companies that could design but also could implement functional graphics into their workflow,” said Alex Leclerc, CEO, Astucemedia, who led the project along with Rami Hosni, Al Jazeera’s art director.

With only months to develop the branding and then implement it with Vizrt, the team at Astucemedia was faced with a massive undertaking, even without mention of the pandemic or the fact the studios were still in various states of construction.

“It was a very challenging project,” noted Leclerc. “Usually, we have the studios ready before we start the deployment, but this time around, we had to virtually prepare the graphics and all of the stuff that was needed to drive the various video walls.”

While the studios were still under construction, the music for the channel was already deep in development, giving Astucemedia a framework to time opens and various animations.

“The whole intention of this rebrand is to be very dynamic with more interactivity within the studios,” said Leclerc.

The overall design is built around the idea of a timeline created from a square taken from Al Jazeera’s distinctive peninsula logo. That square represents a part of a news story moving through a timeline of events.

“Al Jazeera was very interested to discuss the principle of a timeline. A story is a series of events and information,” said Leclerc.

“The brand originates from a square shape that is being extracted from the Al Jazeera logo as a piece of information, and we use that device throughout the graphics to be the conductive device to display the information on the screen,” added Leclerc. “You see a yellow square across the screen architecture through all the programs.”

This square of information is mixed with ribbons and mosaics, representing multiple sources in journalism, and layers, representing truth and transparency in reporting.

Along with the overall brand architecture, Astucemedia conceptualized, created and integrated designs for nearly every program on the network including its morning news, afternoon news, evening news, sports show, business show and its flagship program “Al Hassad” (“The Harvest”).

The main program openers have been developed in Cinema 4D, but were constructed in a way to allow imagery to be quickly changed via Cinema 4D or Adobe After Effects.

The on screen graphics, such as lower thirds and slates, are driven by Vizrt and Viz Engine 4, with creation in Viz Artist. Astucemedia’s data platform provides special data integration and feeds for finance graphics and stock charts with deep integration inside Vizrt.

“Al Jazeera has one of the most comprehensive Vizrt-based setups in the world, bringing content from capture to delivery in a seamless, integrated workflow. Their entire system of graphics are built around the Viz Engine,” said Janez Zigon of Vizrt.

In the newsroom, Astucemedia brought its templating knowledge to Al Jazeera to develop a complete toolkit for Viz Pilot, allowing journalists to create and deliver story packages.

“The journalists are able to use all of the templates in the newsroom,” noted Moawad, with the reporters, editors and producers closely collaborating through the tools.

“Perhaps the most impressive element of the Al Jazeera workflow is how their journalists are closely engaged with production every step of the way,” said Zigon.

“Non-linear editor plugins mean Al Jazeera has a full meta-graphics workflow where the same graphic follows the story from the newsroom through the edit suite and into the studio for execution — (it) being possible to change up until the last seconds before going on-air,” noted Zigon.

“It’s a big network… and it’s a channel that’s existed for 25 years. So the pressure to deliver design-wise, functionality-wise was really high. So this project was really one of the highest pressure projects that we’ve taken because of these different factors,” said Leclerc.

Explore more of our in-depth look at the relaunch of Al Jazeera including the new studio design, directing style and theme music. 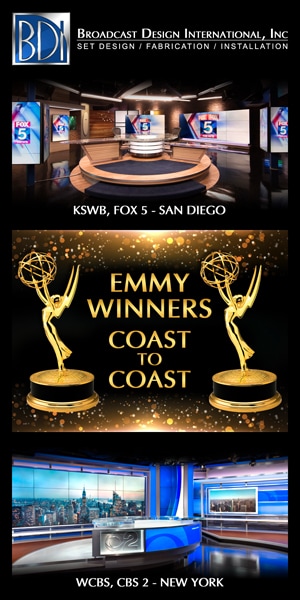