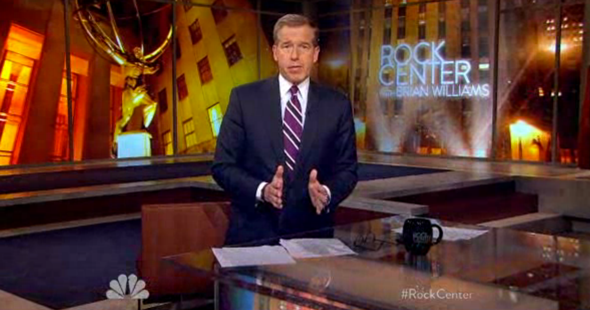 Following its third graphics package in its short lifetime, NBC’s “Rock Center” has also changed how it uses the large rear projection screens in Studio 3B.

Instead of just showing video loops of the Manhattan skyline, the show now uses the large spans of screens to show animated graphics that match the show’s latest graphics package, including the stylized imagery of 30 Rockefeller Center.

The show’s logo is is prominently incorporated into the backgrounds behind Brian Williams, complete with virtual searchlights illuminating the floating letters (anyone else see similarities to 20th Century Fox’s title card?).

In addition, instead of simply overlaying each segment’s title graphics over the rear projection graphics, producers have opted to have them take over the entire screen.

The other show that originates from Studio 3B, “NBC Nightly News,” has also started using the large rear projection screens to display images other than the cityscapes — including in its preshow teases and recently during a segment on the Russian meteorite in February.