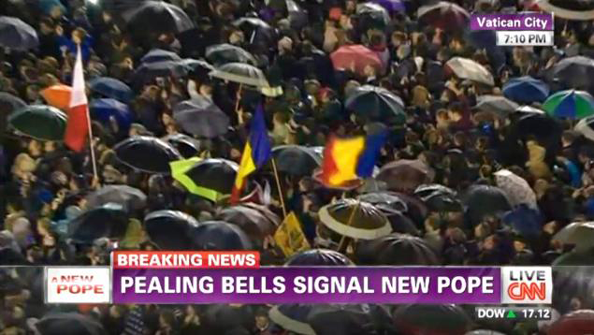 We told you about NBC’s choice to change the “Today Show” graphics red and gold for its pope election coverage, but the network wasn’t the only one feeling a bit colorful — CNN opted for a bright purple and red color scheme.

The cable network switched its graphics to a rather bright shade of violet during its coverage of conclave in Vatican City. The network’s logotype for the topic, meanwhile, was rendered in a bright red shade similar to the one found in the CNN logo.

Deep purple shades are often considered to be the color of royalty, though some would debate if the garish shade CNN’s selection leaned toward was really along those lines.

During some portions of the coverage, CNN’s ticker appeared with a bright red background and white text. As you may recall, the network brought back the ticker in mid-February and changed its color scheme the next day.

CNN also made heavy use of breaking news taglines throughout its conclave coverage, which appeared in red, another recent switch for the network.