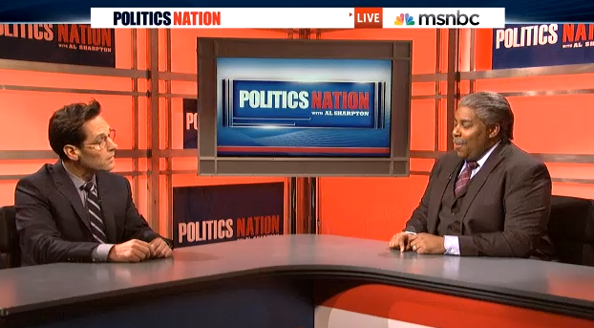 The skit’s set attempted to mimic the real life MSNBC studio’s backlit panels and metallic framework as well as the show and network graphics.

Thompson, playing host Rev. Al Sharpton, and Rudd, portraying an “unpaid Huffington Post contributor,” sat opposite each other at an L-shaped desk with a faux freestanding monitor between them. “SNL” has recreated numerous news sets for skits over the years, including the “Football Night in America” studio being utilized for election coverage, the former “Countdown with Keith Olbermann” set in Studio 1A and even spoofed CNN anchor John King’s touchscreen map during the 2008 election season.