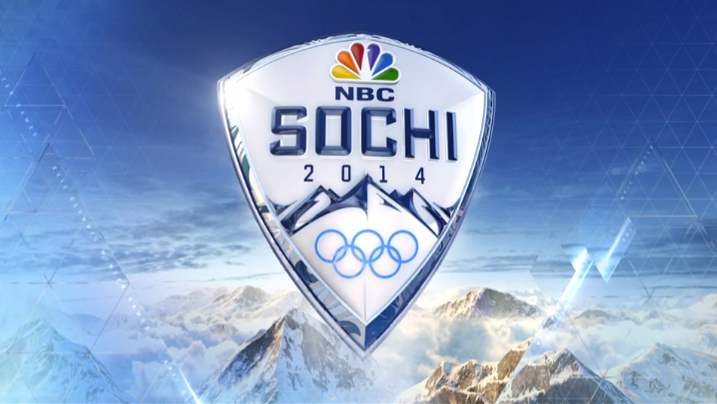 Many of the on air graphics used this year make use of a 3D mountainscape and icy lake with a repeating triangle pattern backed by a wide variety of blue shades.

Those triangles, seen below, are used in a variety of ways, including as full screen backgrounds, overlays and more, and also invariably draw some comparisons to the new Hearst graphics package. In addition to the triangles, NBC has also incorporated the flowery, flowing patterns found in the large printed graphics and other elements from Olympic venues — the same place the triangles are borrowed from. The triangles are also often stacked in a pyramid shape, creating a nod to the mountains found elsewhere in the graphics package. Another common graphical element is the use of snow — with many animation wipes include glowing flecks of powder.

NBC’s two indoor studio sets, meanwhile, also incorporate the triangle designs — perhaps most prominently in the angled metal framework found in many areas of the studio. The sets were designed by Clickspring Design and built by blackwalnut.

The icy wintry motifs are also found around the set — including the frosted shelves in the corner, crisp white faux stonework and winter sports apparatus scattered around the studios as well as a contemporary horizontal fireplace and stacks of firewood. It’s also worth noting the flowery patterns found behind some of the interview area’s shelving. Perhaps one of the most impressive areas, however, is the anchor area, which features a multifaceted triangular desk that’s mounted in a way that creates the illusion of it being precisely balanced on the raised glass platform. The sleek glass structure of that riser gives a glimpse into a video panel array installed in the floor.

While the anchor desk often uses the 2×3 video wall as a background, there is also an impressively decorated around to the right, which combines structural and freestanding glass, video panels and colorful lighting to create a unique look. In some ways, this conjures up images of a cathedral or “ice palace” — but either way it’s still a grand design that sparkles in HD and gives off a great sense of depth and texture.

Above the anchor desk, triangle lanterns mirror those found on NBC News’ Studio 3B and MSNBC newsroom back in New York — though the ones there use all right angles. A circular header is covered with the flowery design patterns. This header is somewhat reminiscent of one element that’s gone missing from these Olympics sets — the large, circular ceiling element used as a video projection surface that’s been on most NBC Olympics sets from the past two decades or so.