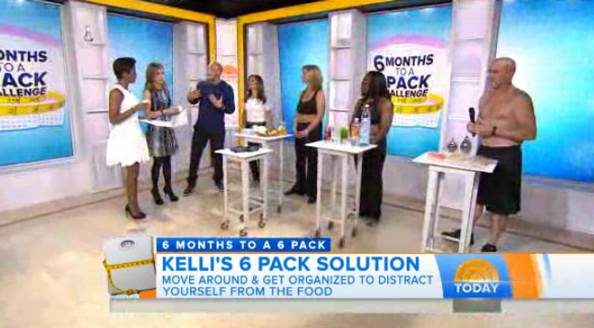 Wednesday’s “Today Show” made use of the new upstairs of Studio 1A — but with the window frames removed, allowing the branded graphics in the “windows” to stand out better.

Yesterday, we noted that Matt Lauer conducted an interview in the upstairs area and topical graphics were fed to the “windows” rather than the live Rockefeller Center video feed, but that the white window frames made the look at bit awkward.

Interestingly, at one point during the “6 Months to a 6 Pack” segment on Wednesday’s show, the removed window frames were clearly visible on camera, stashed in a the corner of the studio behind one of the interviewees, as shown here: In many ways, the frameless look is much better all around — and it might be interesting to even leave them out during the fourth hour of “Today.”

In other Studio 1A news, the show has also switched out the printed graphic that covers the access doors to the left of the production area with a photograph of the street outside the entrance to Rockefeller Center’s Rainbow Room. This mural was previously an image of a brownstone-style homes, which looked a little bit like Sesame Street sometimes.