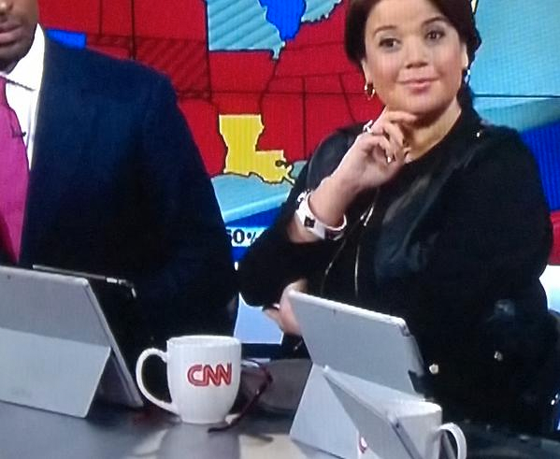 When is an iPad not an iPad? Well, CNN on air personalities seem to think hiding one behind a competing tablet device product does the trick.

Sharp eyed viewers noticed that several CNN anchors and commentators seemed to have a second tablet propped up behind the Microsoft Surface tablets that were prominently visible on camera. Upon closer inspection, viewers discovered those “phantom” tablets are actually iPads, made by rival Apple.

Microsoft apparently provided CNN with tablets as part of its partnership with the network, which includes using Microsoft subsidiary Perceptive Pixel‘s technology on the CNN “Magic Wall” and an online Web app version of it.

While it’s not clear if CNN anchors ever actually used their Microsoft Surface gadgets, it is rather amusing that, at least for most of the night, the devices were essentially relegated to being glorified iPad stands.

Microsoft also has a $400 million promotional deal with the NFL to supply the teams with its tablet, but that didn’t stop TV announcers from referring to them as “iPads” or “iPad-like tools” on air. Eventually, Microsoft had to “coach” announcers on the proper name to use.