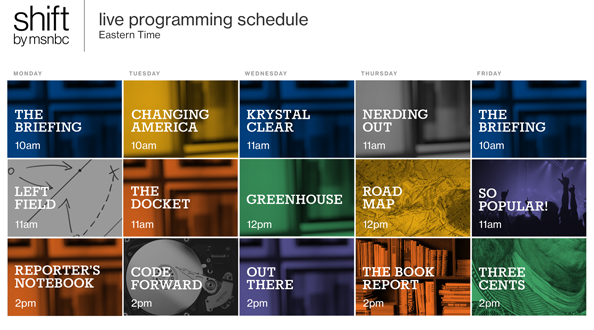 The Shift interface allows viewers to seamlessly move between live events, new shows, original short documentaries and videos from MSNBC shows. Shift also promises to be a fully interactive experience for the user with prominent live commenting attached to the video player, viewers will now have a “single screen” view that allows them to watch live news events while simultaneously engaging with other members of the MSNBC community.

Living on msnbc.com, Shift will extend msnbc’s content offerings with new topics and talent. Fifteen digital shows will go in-depth on a wide range of subjects– from politics to sports, and from tech stories to pop culture.

Online audiences can also follow shift on Twitter @shiftmsnbc, and join the conversation using the hashtag “#shifthappens,” a not-so-clever pun that we’re guessing MSNBC execs think will resonate with millennials and younger audiences.

Running Mondays through Fridays, each one-hour program on Shift will showcase explanatory journalism with informal discussions and allow viewers to interact via the live commenting section and instant voting.

The week will kick-off with The Briefing in which Luke Russert will look ahead to the week in politics, and end with his week in review.

Other highlights throughout the week include: