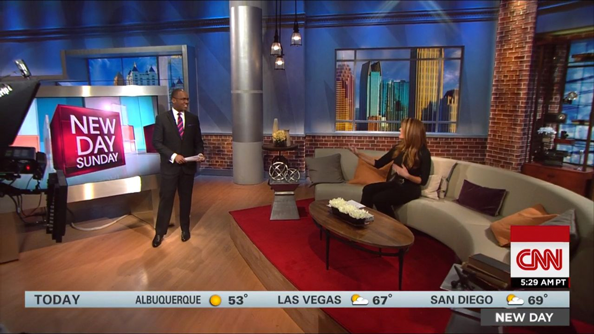 Following the relocation of HLN to Studio 7 in Atlanta, CNN has created a rather weak knockoff of the “New Day” set in HLN’s old space. The space, which has been updated to have faux brick walls, bookshelves and faux windows much like its New York City counterpart, is used for the weekend editions of “New Day” as well as other programs.

The faux window has been modified behind the main anchor two shot features the Atlanta skyline, while other areas of the set have been updated to include “living room” style furnishing sand knick knacks. The column at the center of the studio, which features flat screen and backlit panels, remains in place; this design element has now survived several renovations of the space, having been originally installed as part of the 2001 set.

The new look is rather weak and looks decidedly low budget. Many of the decorative accessories look like they were picked up at the local Target and elements that were designed to look like the New York version have a lower quality look and feel on this version.

h/t to CNNfan.org for noticing the change.