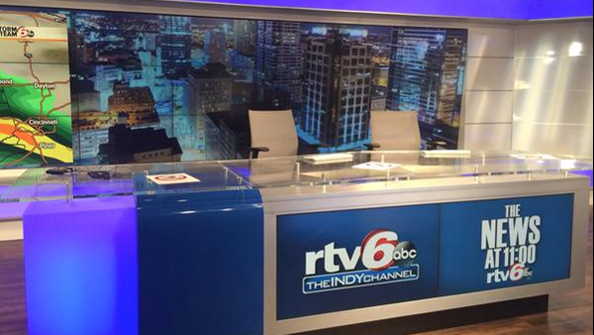 As we reported last week, Indianapolis‘ WRTV-TV has debuted a new set as well as a new 4 p.m. newscast titled “The Now Indy.” The new set, by FX Design Group, features a long 9×3 video wall, with a boxy anchor desk situated in front of it. Meanwhile, a secondary set area functions as a sit-down interview area backed with five vertical video panels that create a illusion of a window. In addition to cityscapes, the station also feeds a video loop of a newsroom flanked by two branded graphics to this array.

The station has given its newly launched 4 p.m. show a sub-brand of sorts — “The Indy Now” and a look that features angled rectangles in bold red that coordinates with the station’s circle 6 logo.

The station has retained its RTV6 branding, along with its “The Indy Channel” tagline, which is reminiscent of the branding scheme once used at Hearst Television stations.

Though WRTV-TV isn’t owned by Hearst (and never has been), it uses the longtime Hearst branding of “The (City Name) Channel.” Interestingly, the tagline is even set in Bankers Gothic, the typeface that was once used extensively at Hearst stations (an continues to be used in some capacity at some today).