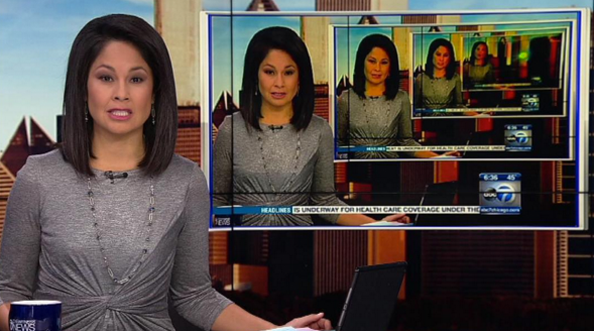 WLS-TV, Chicago’s ABC O&O, had a bit of a spooky technical glitch this Halloween weekend.

ABC 7 Eyewitness News anchor Stacey Baca appeared on camera with what was supposed to be an OTS projected on the large video wall behind her. Instead, however, an eerie, infinite loop of Baca appeared in the silvery-frame, getting progressively smaller and smaller.

What made the look even more odd looking was that, due to the slight signal delay, each version of Baca appeared slightly different.

The station debuted a new set just over a week ago and has been breaking things in. So far the transition has been fairly smooth, though the video array behind the anchor desk does appear to be causing the station some issues — with random graphics appearing over the cityscape photo, animations that seem to “stutter” and some positioning issues.

Baca’s co-anchor Bed Bradley posted a screenshot of the incident on Instagram with the caption: “MY WORST NIGHTMARE: Stacey has multiplied!”