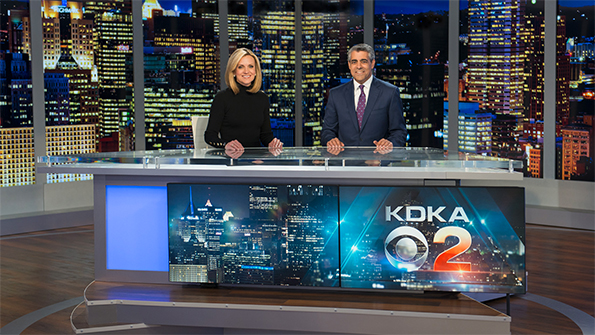 DDG worked to pattern the design of the set off the “thriving city environment” in Pittsburgh, as the area undergoes revitalization and a boom of “life and vitality” in its neighborhoods.

“We are thrilled with our new set in both form and function,” said Anne Linaberger, news director at KDKA-TV. “The contemporary look of the set enhances our strong local news position. The design allows us maximum production flexibility for our local news programs as well as all of the other local sports, entertainment and public affairs programs we produce each week.”

The main anchor area provides a large window on the city, achieved by wrapping the home base with ten 90″ monitors. Another venue of the set includes a 4×3 monitor wall, connecting the anchor desk and weather center. A large rear projection screen creates another area of the set, which is used for sports and the morning show, “Pittsburgh Today Live.”

The overall design includes architectural touches, as described in a DDG release, including exposed stone walls and steel beams which remind viewers of industrial spaces tied to Pittsburgh’s history.

The DDG set also made waves by including textured wave walls reminiscent of the Allegheny, Monongahela and Ohio rivers. A distinctive wood floor adds warmth to the large set and cements the vibrant downtown vibe.

NewscastStudio’s Dak Dillon took a tour of KDKA-TV and will have a report in early January on the visit.